Yesterday at the Board of Ed: MISCONDUCT, iPADS, MiSiS, CHICKENS, SCHOOL POLICE & IMMIGRATION POLICY …but no money for violence + abuse prevention

LAUSD board orders Supt. Cortines to analyze past misconduct incidents in the District

10 Dec, 2014  ::  In the wake of the Miramonte Elementary School child abuse scandal, the Los Angeles school district will analyze past incidents of misconduct to determine how to better safeguard students in the future.

The Board of Education on Tuesday approved the proposal, brought by board member Monica Ratliff, directing Supt. Ramon Cortines to analyze the circumstances of previous misconduct events — including the number of adults present during the alleged misconduct, the work history and previous complaints against the accused employee, and when and where such incidents occurred.

Ratliff initially had called for a study on the feasibility of staffing all classrooms with two adults while children are present. That idea, however, was not included in the measure that the board approved.

The move is the latest in a series of board actions following the arrest of a Miramonte Elementary School teacher for sexual misconduct in 2012 that led to changes in state law and district policies. Teacher Mark Berndt pleaded no contest last year to 23 charges of lewd conduct, including feeding children his semen in what he called a tasting game. He was sentenced to 25 years in prison.

The L.A. Unified School District last month agreed to pay more than $139 million to settle claims related to the case, drawing to a close the lengthy case. L.A. Unified already has paid about $30 million in claims to the families of 65 Miramonte students.

Another proposal by Ratliff would have directed the superintendent to provide a report to the board detailing the district's annual expenses over the last five years for the costs of litigation, awards, settlements and other costs related to criminal actions at district schools. It would have required that the report project the costs of additional safety resources on district campuses — including more cameras, police officers and school safety officers.

But Ratliff decided to pull that measure after speakers strongly opposed additional police officers on campuses.

"That's the report that we need generate — not something that will increase policing," he said.

Board member George McKenna signaled that he would not support the measure.

"I would not be in favor of expanding the role of police in making our schools safe," he said.

There was no discussion of the portion of the resolution that would have required an accounting of legal expenses related to recent criminal actions.

Also Tuesday, the board unanimously approved more than $11 million in additional funds to address problems caused by a new and faulty student records system.

The system caused problems districtwide this fall, with thousands of students unable to enroll in classes required for graduation or college. Teachers were unable to record attendance, and grade information was lost or corrupted.

"We are starting to see evidence that the system is stabilizing," Cortines said at the board meeting Tuesday. "We are looking at the issues that plague our schools, counselors, teachers and administration. We aren't saying they don't exist, but we are trying to resolve them."

A staff report said the system continues to have performance issues and new bugs arise on a daily basis. "The system, as it stands today, does not meet the needs of our schools," the report said.

The district has spent more than $130 million trying to develop a fully functional student records system, known as My Integrated Student Information System, or MISIS.

In other action, the board approved spending about $23.2 million for additional computers to use for students to take new state standardized tests.

The district won't purchase the new devices under a controversial, recently suspended contract for iPads that is now the subject of an FBI probe. Instead, the district will use an older, already available contract with Apple for the iPads. Chromebook contracts were negotiated recently under a separate process.

LAUSD computer system fixes soar to another $2 million per week 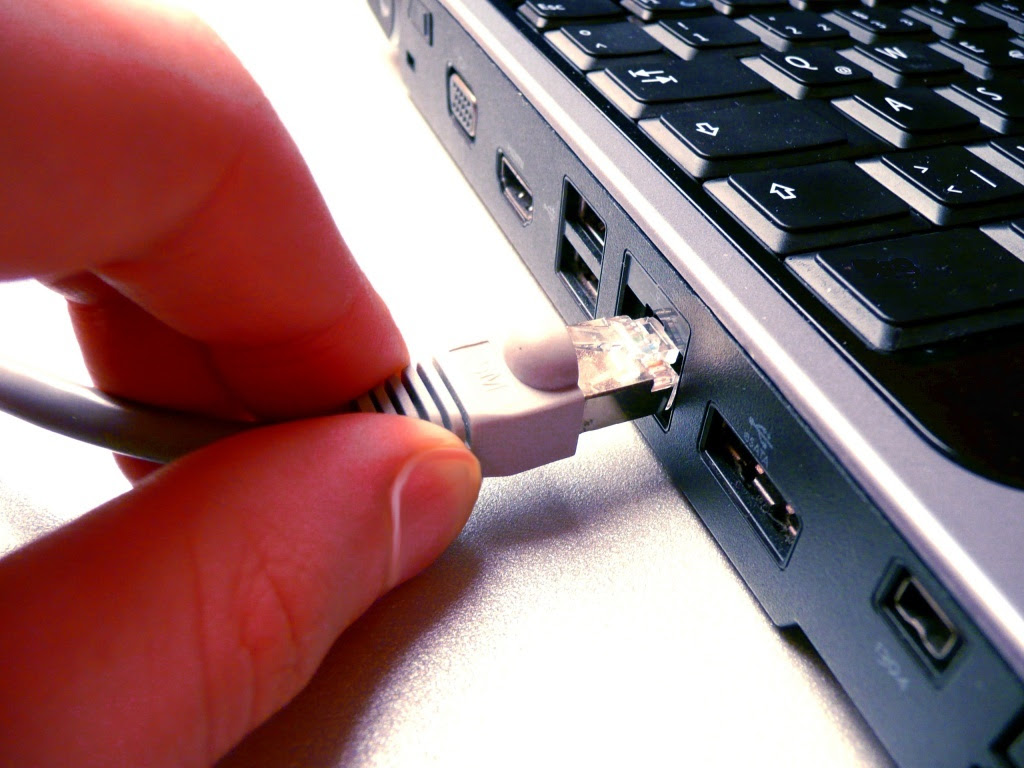 Under the new plan, the district will spend up to $2 million per week from Jan. 1 to Feb. 15 to have technology companies, including Microsoft, debug the system, stabilize servers, and expand use of the system known as MiSiS at charter schools, among other tasks.

The money will also pay for oversight of the work by an outside party and expansion of the help desk.

The new spending brings the total cost of the software system to $45.5 million, three times as much as was initially invested in it.

When the six weeks are up, the board will be presented with another, pricier spending plan for MiSiS improvements. Earlier estimates submitted to the school construction bond oversight committee showed the price of addressing the system's problems could double to about $85 million.

"I still believe it will take a year to resolve the issues with MiSiS,"said Superintendent Ramon Cortines. "We are beginning, though, to see evidence the system is stabilizing."

The school board also approved $22 million ($13 million in new funds) to buy more iPads and Google Chromebooks so students can take new digital state tests in the spring. The purchase brings the number of district tablets and laptops to 120,000 – a figure that does not include equipment in computer labs, which are are not tracked in district's central inventory.

Both funding measures passed unanimously without discussion by board members, even though just a week ago the FBI seized boxes of district documents in criminal probe of the district's iPad program. The newest iPads will be purchased under another agreement than the Apple and Pearson software contract under investigation.

When students showed up for fall classes, hundreds found their class schedules had been botched by the MiSiS system. Many piled into auditoriums and cafeterias waiting days or weeks for officials to fix their schedules. At Jefferson High School in south L.A., some students waited until October and after a judge's order to get a full day of classes.

School counselors then noticed errors in students' transcripts and rushed to correct them before November college application deadlines. The district hired retired educators to help check the transcripts manually.

LAUSD board, unions vow support on Obama’s immigration action …according to a press release

The orders, announced last month, potentially give deportation relief to millions of undocumented immigrants and their children.

A resolution introduced by board members Steve Zimmer and Monica Garcia pledges that the district will develop a plan to assist any students needing help with immigration records or applications.

The district today also announced plans to send a letter home with students advising their their parents and guardians “to be cautious of ‘so-called ‘notaries’ and dishonest lawyers (who) prey on the hopes of individuals and families seeking a better life,” according to a district press release.

The letter was signed by representatives of LAUSD, SEIU Local 99 and UTLA. Before the board meeting, Garcia and Zimmer held a press conference with leaders of the two unions, according to the release.

“The President’s Executive Action will bring great relief to students and their families,” said SEIU Local 99 Lilia Garcia, according to the press release. “I work with our school community every day and I see how much it impacts students when their mother or father is deported. The children come to school with fear or sadness. The President’s action will mean more stability for families, and this will mean students can focus on their education. I am proud that our union will be working with the District to ensure that parents can access information and resources in our schools.”

UTLA President Alex Caputo-Pearl also pledged the union’s support in the release, saying, “As educators, we care about the whole child— not only their academic achievements, but also the social and economic wellbeing of our students. We support the School Board’s resolution on immigration reform and accountability. Students and their parents need our help and we are ready to do all we can inside and outside of the classroom.” 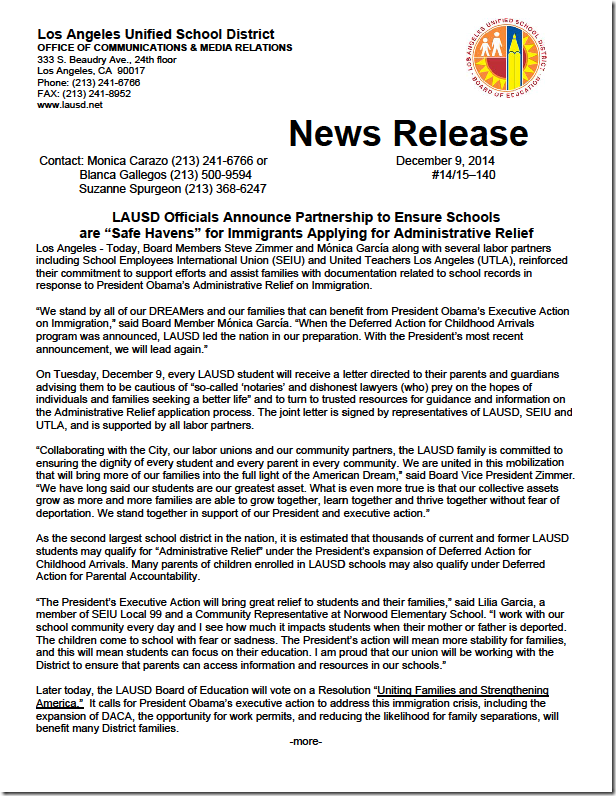 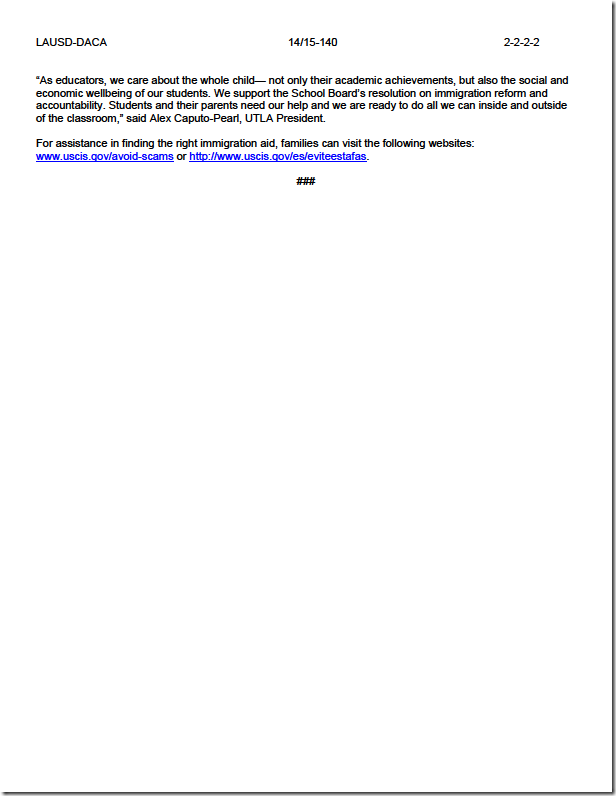