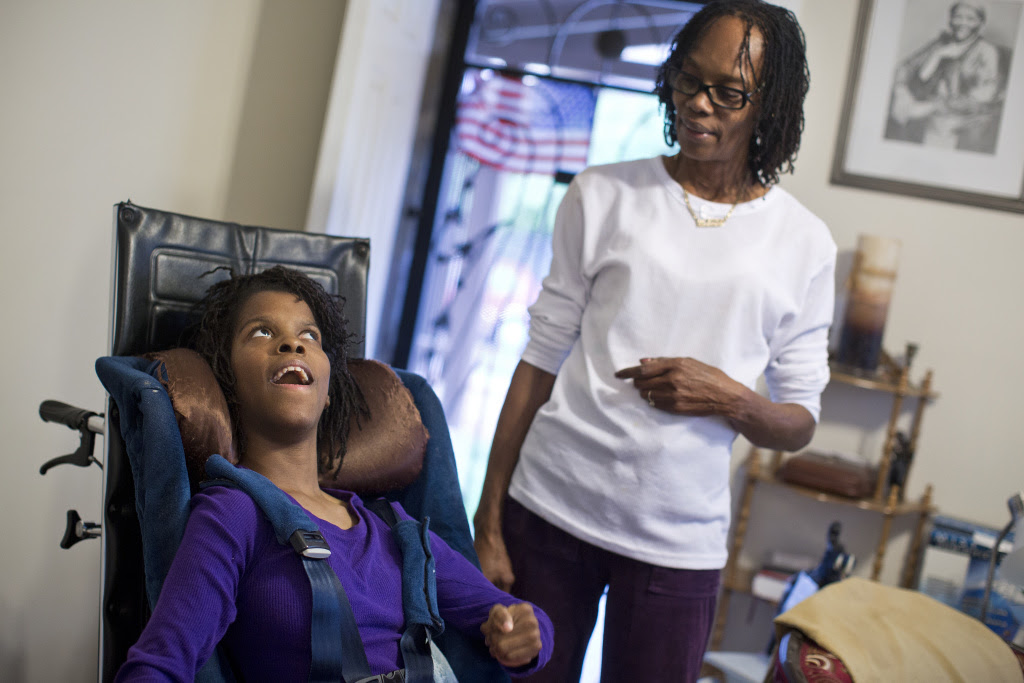 19 Dec 2014  ::  Seventeen-year-old Passion Rencher can't speak. Cerebral palsy causes her head to lurch back and her hands to seize up. She presses her fists against her chest and needs help to stretch out her limbs.

Despite her disabilities, she greets everyone with a wide, joyful smile, and according to her teacher at Widney High, a special education magnet school in near Mid-City, Passion can indicate yes or no when asked questions.

Passion is one of Los Angeles Unified School District's roughly 82,000 special education students whose disabilities can be profound and whose services are increasingly costly to the district.

Changing demographics, advances in care and stronger advocacy by families are all combining to drive up the expense of providing for students' special education needs.

As the general education student population declines, propelled by factors like lower birth rates and departures to charter school, the concentration of special education students in the district is growing along with the cost of services.

“The math does not look good,” Howell said.

She does not begrudge parents who ask for more services for their children.

“It’s always like trying to catch up to the next part. More and more needed to catch up. I think that’s just a natural thing parents want,” she said.

But as she looks into the future, she’s worried.

“Families with students with severe disabilities are often congregated in urban areas. You look at the hospital services that you can get in Los Angeles and the other kinds of services you can get here — many children need those,” Howell said.

The California Legislative Analyst’s Office, adjusting for inflation, found special education costs soared about 10 percent over the last five years. And, there is no cap: the federal Individuals with Disabilities Education Act guarantees special ed students extra help no matter how much it costs.

“That’s how the law was designed in the 70s, and that’s how it’s been maintained ever since," said Dean Hill Rivkin, a professor at University of Tennessee Knoxville and a special education lawyer.

While the federal government mandates quality services, it doesn’t pay for all of the costs. Only 15 percent of L.A. Unified’s special ed costs are covered by federal funds.

Stephen Rosenbaum, a law professor at UC Berkeley and the father of a special needs student, said its up to Congress to increase spending.

“They’ve never come close to doing it, so this became the bane of everyone, from administrators to parents to the students themselves,” Rosenbaum said.

He points to litigation spanning nearly 40 years since the passing of the Individuals with Disabilities Education Act to show many schools cut expensive services even when kids were shown to need them.

“There is game playing going on, shuffling around the funds or manipulating the process,” Rosenbaum said.

Families are more successful in arguing for services when they bring in an attorney, Rosenbaum said. He argues the government could equalize access to services by supplying low-income families with private lawyers.

One family's fight for services

Beside teachers, Passion also sees an orthopedic therapist, a speech pathologist, a physical therapist, aides and a school nurse, all paid by the district.

Passion's family pays for her care as well. In one year, speech and physical therapy bills exceeded $30,000, said her grandmother Maya Osborne, wiping out Osborne's savings in the process.

Osborne wants her granddaughter's special education school to provide more of her services, but she has to beg, bargain and badger for each hour of Passion’s occupational therapy, she said.

“After a while they just ignore you,” Osborne said. “The more I talk about it the more I get upset.”

Over Passion's lifetime, the cost of her care could swell to $1 million, according to the Centers for Disease Control. LAUSD must share the responsibility for her needs until she turns 22.

“Passion deserves the opportunity to have a good quality of life,” Osborne said.

At their house in South L.A, Osborne helps her granddaughter stretch her fingers, and tries to alleviate the painful paralysis in Passion’s limbs.

“I’m teaching her to stretch her arms out, open her hands up,” Osborne said, messaging the girl's palm. “Because you have to do this, not grandma,” she tells the girl.

Osborne hopes her granddaughter will learn to communicate, if not verbally, than through a computer.

She keeps stacks of reports and receipts for Passion’s care on a card table living room table, layered like shingles on a roof.  Osborne, a former medic in the military, meticulously documents any development or fact that could prove valuable in a lawsuit she’s preparing – her second – against the district on behalf of Passion.

Last year, L.A. Unified handled 3,206 special education disputes with parents, who are encouraged to resolve issues informally or through mediation.

Special education services at L.A. Unified are improving, according to independent monitors.

Students wait less time for evaluations, and disputes with parents are settled sooner. More special education students are graduating, although their rate still trails the district average by more than 10 percent.

Just as many felt bullied by school staff.  That's when Jackie Smith-Conkleton steps in: she is a bully buffer.

She’s a surrogate parent, someone who pushes for special education services when a student doesn’t have parents or the district can’t find them.

Smith-Conkleton said it’s vital to have someone “loud” at the table advocating for students.

“They just assume they can’t do, but how can you say a person can’t do if they don’t have the opportunity?” Smith-Conkleton asks.

Smith-Conkleton teamed up with Osborne to help fight for Passion's services, demanding a new power chair and a communication device that can travel home with her.

“You need someone so you don’t think you're nuts,” Osborne said. Having Smith-Conkleton helps her communicate to the IEP team about Passion's cognitive goals, such as placing ideas in sequence and recognizing her last name, she said.

As Passion nears her 18th birthday, Smith-Conkleton worries that without more help from her school, she will never learn to communicate.

“We are tired of fighting for things they should automatically see that they need,” Smith-Conkleton said. “But we cannot give up.