TO GIVE THEIR CHILDREN A BETTER EDUCATION, PARENTS LAUNCH A NEW SCHOOL 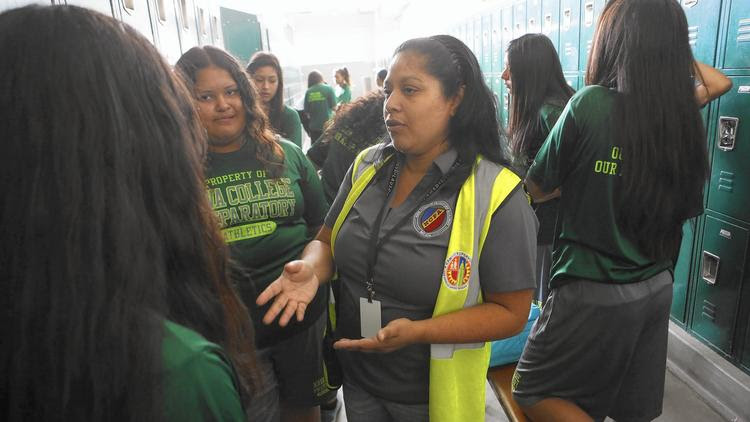 Supervisor aide Maria Melendrez talks with students in the girls locker room at Nava College Preparatory Academy. Melendrez was one of the parents who spearheaded the school's founding. (Anne Cusack / Los Angeles Times)

Maria Melendrez's daughter thrived for three years at the Julian Nava Learning Academy, a sparkling middle-school campus in South L.A. where she was pushed to excel.

But Melendrez feared what would come next for her daughter. She could send her to underperforming Jefferson High, or perhaps put her on a bus to a magnet school in the San Fernando Valley. She and other parents lamented the lack of quality high schools in the neighborhood.

So they decided to start their own.

Morning chats among parents turned into strategy and brainstorming sessions. One enterprising mom picked up the phone and simply called the local L.A. Unified district office to ask how to start a school. 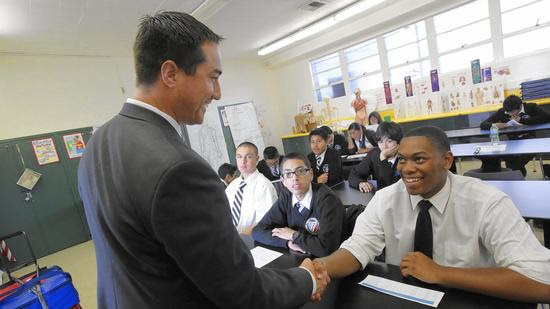 "We figured, why can't we make it? Why can't we do something to make sure this community has a better school?" Melendrez said. "We decided that we were going to do it ourselves."

They pitched the idea to their children's teachers. Nava Principal Tommy Welch, who had been working for three years to get the new middle school up and running, signed on to try to do it all over again.

"We were very focused," Melendrez said.

They set a meeting with Tommy Chang, the senior district administrator who oversees the area. When he walked into the small room on the middle school campus a few weeks later, he was surprised to find dozens and dozens of parents. He'd never seen anything like it.

Repeatedly, they told him of the great experiences their children had for the last three years: the top-notch teachers; the safe, clean campus; and how much they wanted to have the same experience in high school.

"It was super powerful to walk into a room of parents — there were like 50 of them — and they all said the same thing: 'We want a great high school for our kids,'" Chang said.

He encouraged them to apply as a "pilot" school. L.A. Unified allows those campuses, like the middle school, to try to spark innovation by giving educators autonomy over curriculum, budget, staffing and training, among other things.

The parents, teachers and administration worked tirelessly on the pilot school plan and submitted it last December. It was aimed at continuing the traditions, structure and culture of the middle school they loved.

The plan was approved by the Board of Education in January. 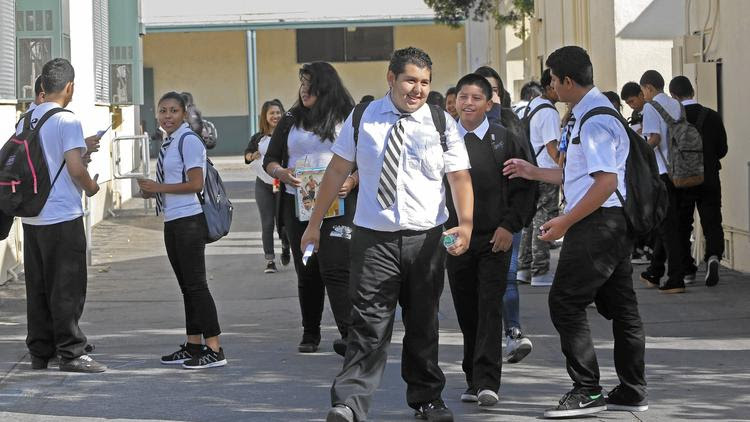 "We did it. We had an opportunity to put our word in and say, 'You know what, we want something better for our students,'" Melendrez said.

It was a unique showing of parent power. The group had ambitions beyond the typical PTA and used a less confrontational route to asserting control over the education of their children. In recent years, parents at several underperforming public schools have tried to force dramatic changes in management using the state's parent trigger law. If at least half of the school's parents agree, the law gives them the power to demand changes in staff and curriculum, close the school or convert to an independent charter.

Here, however, parents were happy with what they had and fearful of what came next. It was a preemptive move to keep their students out of low-achieving high schools, parents said.

Magdalena Marquez said she appreciated teachers and administrators at the middle school who were relentless about talking up college, and she worried that her daughter would not have the same focus if she went to Jefferson.

"My dream became a reality," she said in Spanish. "She's a smart girl and to see the progress she's made and to know that she won't stop and will keep advancing — it's incredible. It's something many of the students in this community don't have."

The high school opened with about 280 ninth-grade students, using previously unoccupied bungalows next to the football field on the Jefferson High School campus. About 300 students will be added each year to eventually reach about 1,100 students in 2017. Students wear uniforms; for boys, a button-down shirt, tie and cardigan. 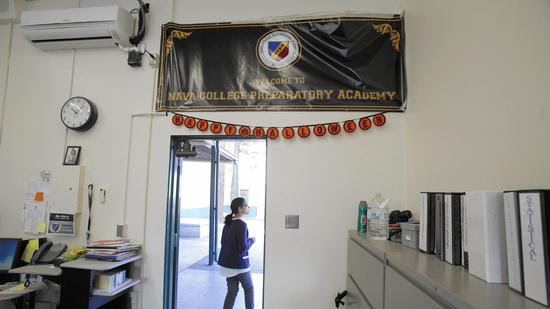 The school draws from the same neighborhood as Jefferson; nearly all students are eligible for free or reduced-priced lunch, a poverty indicator. Only three students at Nava College Prep have parents with a college degree.

Nava Prep has avoided some of the problems that plagued Jefferson, where students languished for weeks without appropriate classes after a scheduling snafu. All students at Nava had their schedules weeks ahead of the first day and they had perfect attendance.

In his 19 years in education, Welch has never had a group of parents more driven to have their children succeed in the neighborhood they call home.

"They have such a pride for this little, tiny part of South L.A.," he said.

The staff works to promote transparency and constant dialogue with parents. Welch has an open-door policy. In fact, he doesn't have a door. He doesn't even have an office.

And parents aren't shy about giving their opinions, all of which are welcomed.

"You'd be amazed at these parents. They just walk into the front office," he said, laughing. "They aren't afraid to demand this, question this, ask for this, give their two cents about that."

Melendrez, to the chagrin of her teenage daughter, takes a short walk around the corner each morning to volunteer as a campus supervisor. She checks uniforms as students walk in, makes sure kids get into class and tries not to be too overbearing with her daughter.

"You can tell that every day when they walk in and say good morning to you — they're happy to be here," she said. "I look forward to every day here."