ALL THE SUPERINTENDENT’S MEN: Everybody had long since gone home. 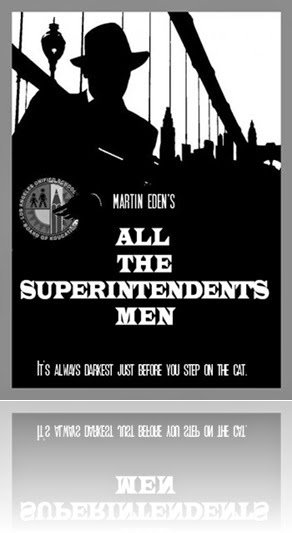 The lights were still on bright and he looked around at his task. Some strewn agenda papers and coffee cups on the floor in the gallery. No big deal. He liked the silence of only him and Security right outside.

He knew to leave the papers and tablets on the Board desk alone.

It had been quite a day at Beaudry. Having worked in the District for twenty years in custodial and maintenance, he had seen a lot of people come through here. Although no one asked his opinion of matters pertaining to education, he followed the news carefully because it was not only where he worked every day, but because his two kids had gone on to become teachers.

He watched as the Federal agents came and workman-like collected the material that had been already prepared for them.

They officially used the term “visited” as if they were dropping over for holiday sugar cookies and coffee. There was no joking nor small talk. Everyone who took wore a face of solemnity and everyone who gave had the nervous odor of dread.

For years, while watching the Board in session–himself unnoticed awaiting his clean-up duties–he felt he knew each member intimately just by their public comments and demeanor. He also realized in this matter, most of them were way over their heads.

The possibilities…“Scheme to defraud” “Conflict of interest” “Public corruption”.

In retrospect, the Board was playing a delicate game when it made moves to try to envision a “post Deasy” LAUSD. It was essential that we all play nice, they must have thought. Perhaps they were alarmed back in October when Deasy played hard ball, through his mondo-expensive Beverly Hills anti-trust attorney, demanding records of contacts between the board members and tech firms. That was a clear public shot that HE knew something. The canny sprinter wanted to tell the Board in no uncertain terms the dangerous game they were playing.

The janitor had seen a number of District Supes in the last decade, but none were as shrewd and cunning as John Edward. Although not nearly as big in size as one would think, Deasy certainly commanded a room and it was all through attitude and purpose.

But so much of it was the invisible Goliaths that always stood behind his center Board position.

THE LA Times Editorial Board.

They were the ghost leviathans who allowed Deasy to imperiously behave with impunity, bullying any and all who challenged his authority or directive. Deasy relished the power these spirits provided him and he enjoyed watching the fear in others as he delegated this or that.

And now, the janitor wondered, what will happen next?

What is going on far across town in the Federal Building on Wilshire.

Maybe David Holmquist had a friend there who could give him a head’s up. He knew Arne Duncan may be able to provide some information, but Holmquist must figure that everyone is now gonna run away from this cluster-F and put out cautiously supportive meaningless statements about “letting the process take its course.”

The poor Board members were staying up very late that night. They were reviewing everything in their heads about all their own dealings with the iPad bidding and procurement, ruing the day that Deasy and Aquino ever put this whole thing in motion.

As part of the resignation deal, Deasy exacted the BoE to state that they did “not believe that the superintendent engaged in any ethical violations or unlawful acts” in regard to the emails. They hoped that would be the end of it on both parts. No harm. No foul. The other says so.

Last night however, each board member tossed and turned restlessly–except newbie Monica Ratliff, who knew far more than anyone what was going on. They would all try to get to her somehow, through someone, to glean what knowledge the attorney possessed.

Well past midnight they asked themselves, “Was there ANY false statement made at any point? What would the Feds consider “problematic”? Forget about my re-election…Do I have to hire an attorney now?”

The janitor walked to the big power vacuum cleaner in the back of the room. He had watched so many spectators over the last two years decry the expenditure as folly and saw how each was shot down in the name of Civil Rights.

He wondered how many were thinking about their own Fifth Amendment Civil Rights?

The janitor turned on the machine and began to sweep up the microscopic crumbs that always littered the BOE room; the detritus that no one ever sees–but he could reconfigure what they once had been.