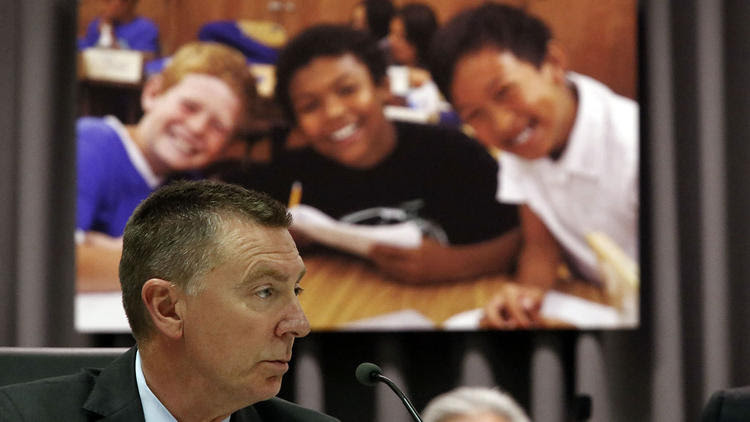 John Deasy, shown at a Board of Education meeting in August, came under fire for the iPad program. (Gary Friedman / Los Angeles Times)

Dec 2, 2014 11: 58 AM  ::  FBI agents on Monday removed 20 boxes of documents from the Los Angeles Unified School District related to the awarding of contracts for the ill-fated $1.3 billion iPad project, officials confirmed.

"They stopped by late yesterday afternoon," Cortines said Tuesday. "I found out at 4:30 in the afternoon on Monday." Cortines said he then alerted the district's general counsel to notify the Board of Education.

Cortines said he was still waiting for a report on the nature of the investigation, but other sources within the district confirmed that the agents were focusing on the effort to provide every student, teacher and campus administrator with computers.

The iPads-for-all project was a signature initiative of his predecessor, John Deasy, who resigned under pressure in October. Deasy readily acknowledged that the project was an expensive draw from bond funds. But he said there was no other way to pay for what he called a civil rights imperative — to provide low-income students equal access to technology in the nation's second-largest school system.

The L.A. Unified Board of Education approved the iPad contract without opposition in June 2013.

The rollout last year at 47 schools encountered numerous problems. Students deleted a security filter so they could freely browse the Internet; many teachers felt poorly prepared to use the devices. Within months, the board decided to move more slowly, while also trying out other devices and curricula.

Deasy suspended purchases under the contract after disclosures that he and his top deputy had especially close ties to executives of Apple, maker of the iPad, and Pearson, the company providing the curriculum on the devices.

He said the suspension was related to changes in the technology marketplace and not to the disclosures. He has denied any wrongdoing. And an internal report that examined the technology effort showed major problems with the process and the implementation. An internal LAUSD investigation is continuing. But the search Monday is the first sign that the FBI is looking into the issue.