PUNISHED TEACHER IN CLASS AGAIN: Eight-month exile over fundraising spotlights union and district differences on the issue of discipline 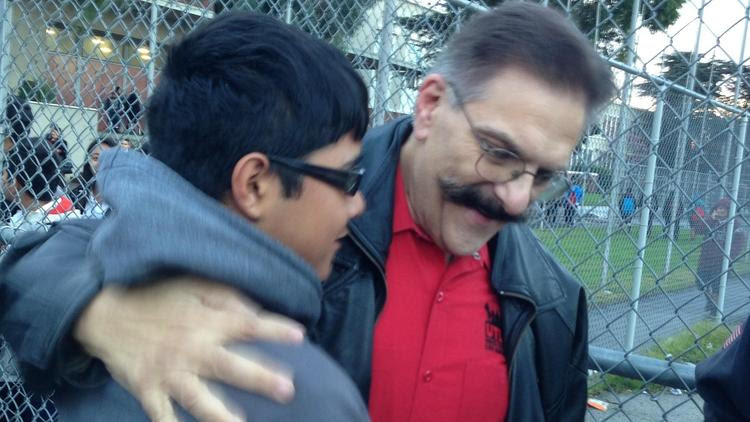 Stuart Lutz, right, a South Gate Middle School art teacher, returned to class Wednesday after being cleared of wrongdoing in a case that drew attention to the LAUSD's "teacher jail" system. Those welcoming him back include former student Armando Chavez, now in high school. (Howard Blume / Los Angeles Times)

Published online Dec 17, 2014/In print Dec  21, 2014   ::  A popular South Gate Middle School teacher returned to the classroom Wednesday, eight months after he was pulled from campus for alleged financial improprieties.

The case of Stuart Lutz, 60, became one more touchstone in the debate in the Los Angeles Unified School District over "teacher jail," the informal term for the administrative offices where instructors report after they've been removed from their classrooms over allegations of wrongdoing.

The teachers union, United Teachers Los Angeles, has insisted that teachers have been needlessly removed from classes, kept out of work for unreasonable periods, overly punished for minor mistakes and wrongly dismissed.

Lutz's experience underscores the question of whether administrators unfairly took advantage of district policy to remove teachers who were troublesome, but not necessarily guilty of substantial misconduct. Lutz was the union representative for his school and had some disagreements with the principal.

Lutz acknowledged Wednesday that he failed to follow proper procedures for organizing and paying for field trips, but added that he and other teachers had been operating this way for years without knowing any better.

At the request of the union, L.A. schools Supt. Ramon Cortines agreed to authorize a fresh and expedited look at the allegations and evidence against Lutz, an art teacher who was involved in student activities.

Union President Alex Caputo-Pearl called the return of Lutz a "huge breakthrough," but added that major differences remained in contract negotiations that still could result in a strike. The union and the district have agreed to fast-track negotiations, with meetings every week, he said.

Lutz said his discipline ultimately consisted of a "conference memo," in which an administrator explained what Lutz did incorrectly and how to avoid such problems in the future. Such memos can lead to more serious consequences if a mistake or misconduct is repeated.

The teacher praised "this wonderful outcome."

"It’s so great to know that so many people were working so hard on my behalf for this homecoming," Lutz said. "I’m so happy to be back.”

Students also would be pleased, said Armando Chavez, 14, who was in Lutz's class last year.

"It was a lot of mayhem after they took him out, and a lot of things were very different," said Armando, who is now in ninth grade at South Gate High School. "We had about six substitutes for the rest of the year."

The number of teachers and other employees who were removed from schools ballooned to about 300 after the January 2012 arrest of former third-grade teacher Mark Berndt for sexual misconduct at Miramonte Elementary. Berndt eventually was sentenced to 25 years in prison. His alleged victims received settlements totaling nearly $170 million.

That case and others prompted district officials, particularly then-Supt. John Deasy, to take what they considered a safety-first approach, both to limit potential harm to students and to limit liability for the nation's second-largest school system. Other measures included reviewing records going back decades to weed out possible past or future offenders.

District officials have insisted that they want to treat teachers fairly. They note that most teachers continue to be paid after they are pulled from their classrooms. L.A. Unified also recently set up a special unit of investigators to resolve sexual misconduct cases more quickly. And teachers who have been removed from the classroom, who formerly had to report to a district office during work hours, where they did nothing, now can remain at home.

Union activists complained that such measures were insufficient because, they said, allegations still resulted in a teacher being considered guilty until proven innocent.