Field Poll: CALIFORNIANS STRONGLY IN FAVOR OF PRESCHOOL …but at what cost?

By Lillian Mongeau in EdWeek | http://bit.ly/1vTGk0n

Voter enthusiasm held steady when the focus was directed to publicly funded preschool.

"When asked how important it was for the state to further expand preschool so it serves all low-income 4-year-olds, 58 percent of those surveyed said it was 'very important' and 23 percent said it was 'somewhat important,'" Lisa Fine reported for EdSource.

The poll data comes on the heels of a bill introduced in the California legislature on Monday that would expand the state's public preschool program to all eligible 3- and 4-year-olds. Currently, the program is underfunded, and not all children who qualify under the income requirements are able to secure a spot in a classroom.

Assemblymember Kevin McCarty, D-Sacramento, may have the public's support for his bill. It's far less certain if Gov. Jerry Brown will throw his support behind the bill. The governor has been historically reluctant to come out in favor of preschool programs, though he did sign off on an additional $273 million for early learning and child development in the 2014 budget.

"We are moving the needle here," Deborah Stipek, dean of the Stanford Graduate School of Education told EdSource's Fine in response to hearing the poll data. "That's really impressive. I hope our governor and Legislature are listening." 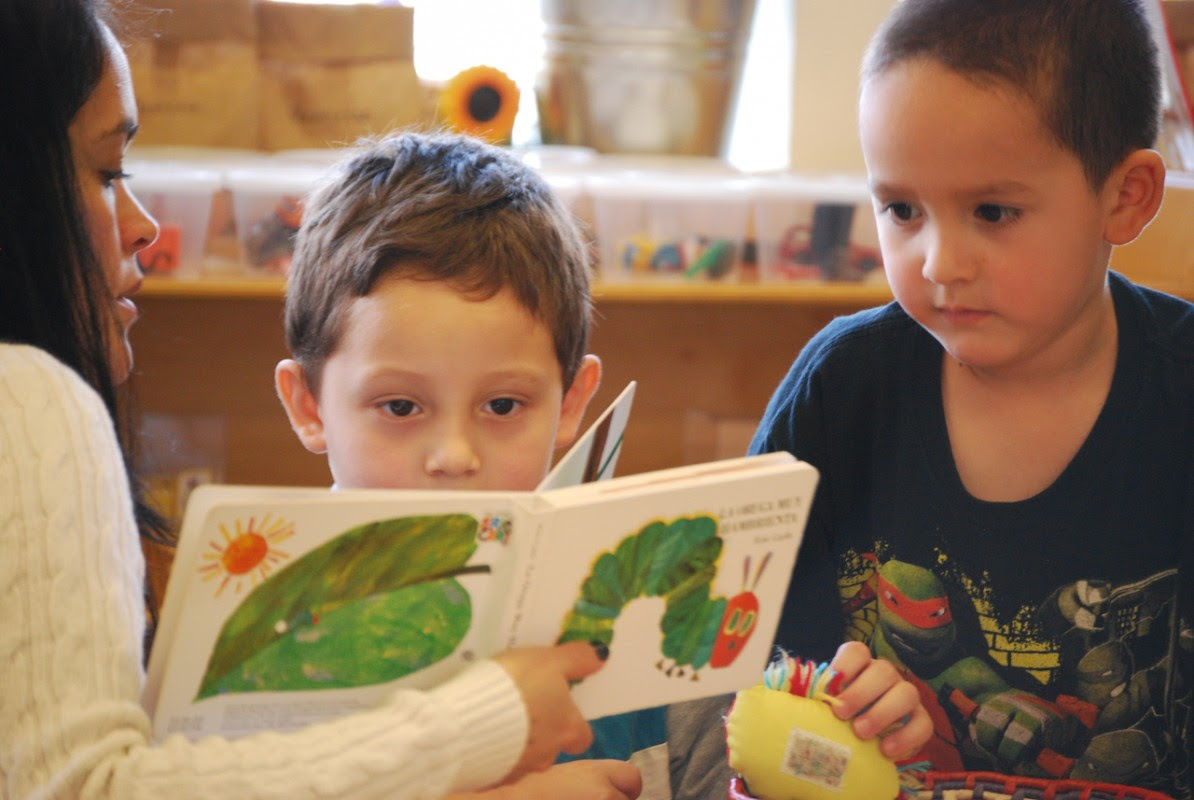 Credit: Lillian Mongeau/EdSource  A teacher reads a book to two students in their state preschool classroom in East Palo Alto.

December 2, 2014 |  A vast majority of California registered voters believe attending a high-quality preschool is important to a student’s future success in school, according to a Field Poll conducted in partnership with EdSource

Of the 1,010 registered voters surveyed, 61 percent consider a high-quality preschool experience “very important” to a student’s later success and 22 percent said it is “somewhat important.”

“What these findings show is a clear recognition of the critical importance of high-quality education in the lives of children, and to their future success,” said Deborah Kong, president of Early Edge, a preschool advocacy group in California. “With 83% of the public believing that a quality early experience is critical, there can be no mistake that this is a core public value.” 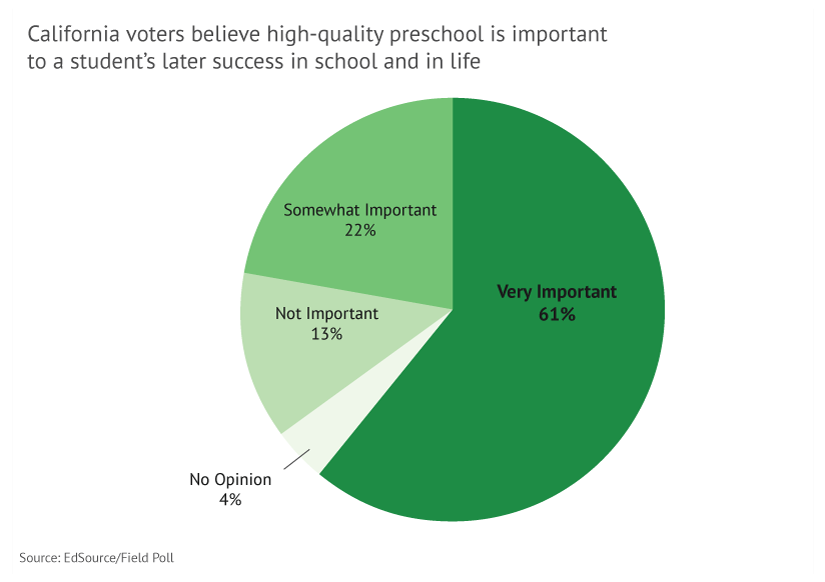 In recent years, several  states and cities have been expanding their public preschool programs with increasing public support. President Barack Obama put the issue in the national spotlight when he called for universal preschool for 4-year-olds in his State of the Union address in February 2013. President Obama will host a White House Summit on Early Education on Dec. 10, when he will announce the states and communities that will receive $250 million in Preschool Development Grants and $500 million in Early Head Start Child Care Partnership awards.

In California, the question of how to expand preschool took center stage in the last legislative session. A push to make an extra year of public school called “transitional kindergarten” available to all 4-year-olds, not just those who turn 5 between September and December, did not make it out of the Legislature. But the Legislature agreed to a plan that expanded access to full-day preschool for 4-year-olds from low-income families. The state budget included additional funding for 11,500 low-income 4-year-olds. The budget bill pledged to add an additional 31,500 slots in upcoming years but does not guarantee funding. The plan will eventually cover half of California’s 4-year-olds.

When asked how important it was for the state to further expand preschool so it serves all low-income 4-year-olds, 58 percent of those surveyed said it was “very important” and 23 percent said it was “somewhat important.”

“What these findings show is a clear recognition of the critical importance of high-quality education in the lives of children, and to their future success,” said Deborah Kong, president of Early Edge, a preschool advocacy group in California.

“We are moving the needle here,” said Deborah Stipek, dean of the Stanford Graduate School of Education. “That’s really impressive. I hope our governor and Legislature are listening.”

It is often public opinion, rather than policymakers, that drives change, Stipek said. The public is embracing preschool because there is a growing awareness of its importance, she said.

“We know so much more about brain development,” Stipek said. “It lays the foundation for later learning. There is a whole lot of it going on in the first few years. We have more compelling research showing the benefits of quality Pre-K.”

Despite strong public support for preschool, overall awareness of the state’s “transitional kindergarten” program was low. Only 28 percent of registered voters surveyed said they had heard of it, while 72 percent said they had not. However, awareness of transitional kindergarten was higher among parents, with 45 percent of those with children under 18 and 53 percent of those with children age 5 and under being familiar with the new grade.

However, registered voters were split on whether transitional kindergarten should be expanded to include all 4-year-olds, which would add a projected $1.4 billion to the state’s budget by 2020 were it ever fully implemented.

Thirty-nine percent of registered voters said they want transitional kindergarten expanded for all 4-year olds. Forty-one percent said the state should continue to limit the program only to those 4-year-olds who turn 5 between September and December and missed the Sept. 1 cutoff to enter regular kindergarten.

“We’re also pleased to see a recognition of the importance of adults who understand the unique needs of children at this critical age, and whose preparation and professional development are on par with that of their K-12 peers,” Kong said.

Researchers interviewed 1,010 registered voters by telephone between Oct. 15 and Oct. 28 with a margin of error of plus or minus 3.2 percentage points. Twenty-seven percent of those surveyed said they are parents, and 14 percent said they have children age 5 or younger. 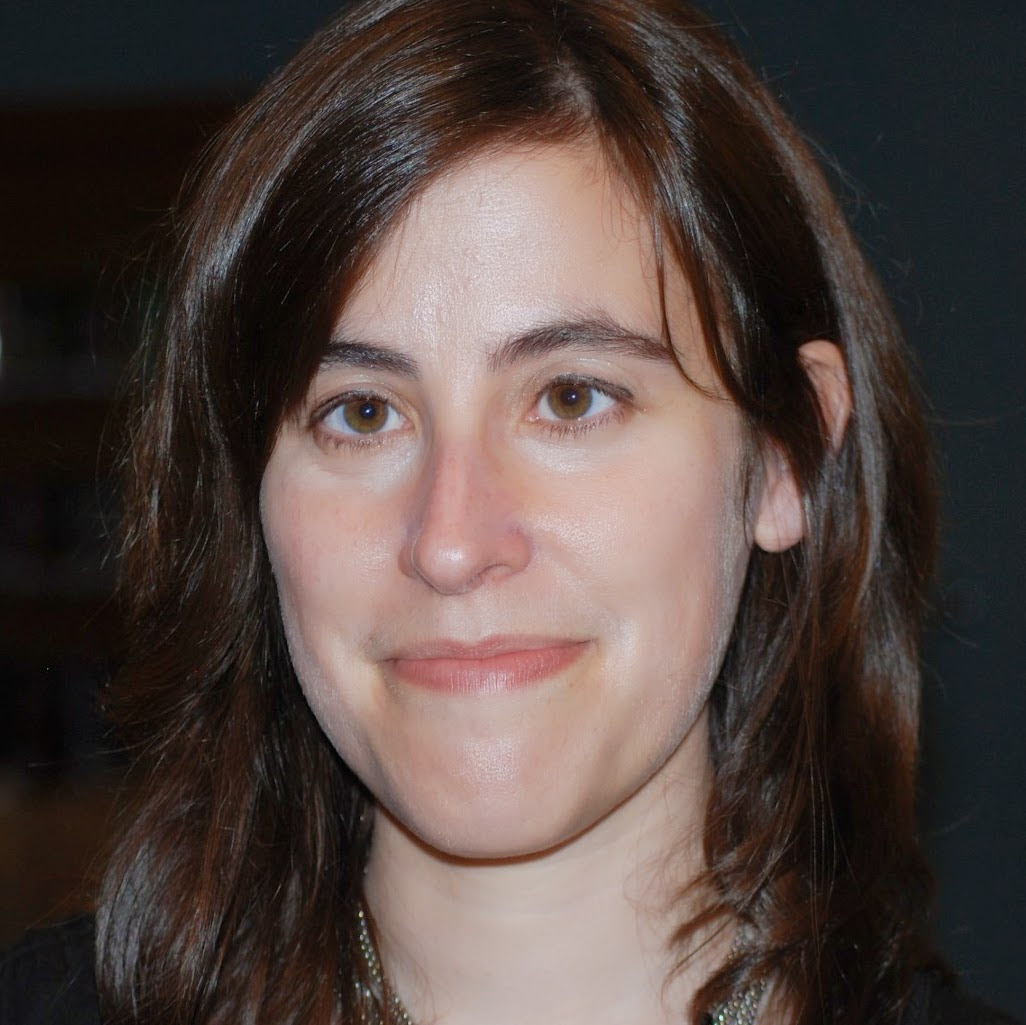 Preschool would be great if it were really preschool. But it is now "school." Preschool is now "academic," filled with academic standards and tests. Every test given, (excuse me, every "assessment") is profit for the .001%. (Eager parents, in fact, can download preschool tests (see e.g. tests available at the oddly named "have fun teaching" website: http://www.havefunteaching.com/worksheets/test-practice/preschool-test-practice.)

I suspect that at least some of the pious pronouncements we hear about the importance of preschool are because more children in preschool means more tests are given, and this increases profits for the testing industry.