Listen to the radio story 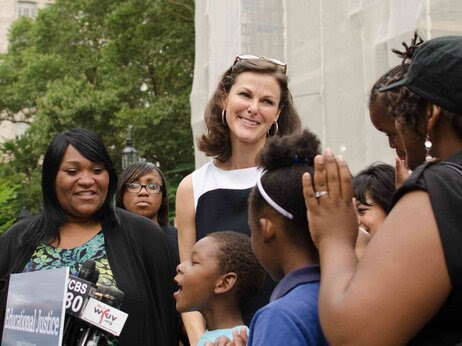 KEVIN WELNER: Saying, well we should be able to fire teachers who are bad, of course we can agree on that.

SANCHEZ: To be clear Kevin Welner is not a critic of tenure laws. As director of the National Education Policy Center he hasn't taken a position and sees merit in both sides of the debate.


WELNER: I think there are probably also strong very strong arguments to be made that they should remain unchanged. I mean these job perfections were put in place to avoid other problems related to arbitrary firings and corrupt and nepotistic employment practices and they still serve that purpose to some extent.

SANCHEZ: Up to a point says Michelle Rhee, founder of Students First.

MICHELLE RHEE: There are states and jurisdictions in which the dismissal process is way too time-consuming and cumbersome essentially making it impossible for those teachers to be fired. And so when we have nonsensical laws that give people essentially a job for life, regardless of performance we should remove those policies or fix them.

SANCHEZ: After resigning under a cloud of controversy as Washington D.C.'s schools Chancellor, Rhee embarked on a national campaign. She and her group are targeting states whose constitutions explicitly guarantee every child the right to a quality education but are clearly falling short. Rhee could have used any number of problem areas to make her case, lopsided school funding, ability grouping, special education, but she settled on teacher tenure and seniority. Rhee's group supported the Vergara lawsuit in California and helped with this latest lawsuit in New York. Now she says it's time to take the fight to at least four other states. Minnesota, Connecticut, New Jersey and Tennessee.

VAN ROEKEL: She wants to go after unions. This has nothing to do with students.

SANCHEZ: Dennis Van Roekel is the outgoing president of the National Education Association.

ROEKEL: She has no evidence whatsoever that if you removed due process that that will somehow improve education.

RHEE: Nobody's arguing that we get rid of due process rights. What we're saying is lay offs should not be done by seniority (Unintelligibility) egregiously incompetent teachers, that the dismissal process should be process should be more streamlined.

SANCHEZ: Van Roekel insists unions are not opposed to straightening the time it takes to fire ineffective teachers or lengthening the time it takes to get tenure. Most states, 41 in fact, require anywhere from three to five years before a teacher is eligible for tenure. If anti-tenure groups don't think that's reasonable and want to challenge tenure laws in court, fine, says Van Roekel.

ROEKEL: But I'm going to fight like crazy to make sure that they also deal with equable funding, equitable learning conditions for all students because if they fail to address those issues, the losers are the students that we have in our schools today and tomorrow. And that is just wrong.

SANCHEZ: Legal experts say focusing on tenure and seniority laws alone does not get at lots of other problems. Again Kevin Welner.

SANCHEZ: And Welner says Vergara like lawsuits could expose lots of other damaging policies that state courts could just as easily view as discriminatory. Again policies like ability grouping, which tracks low-income minority students into classes and programs that are nothing more than academic dumping grounds. So, maybe the silver lining in all this says Welner, is that state courts will be asked to scrutinize lots of questionable education policies and laws.

WELNER: Maybe it's time that we started moving in that direction. Asking the courts to play that role isn't ideal but it's probably preferable to generation after generation of kids being denied basic equality of educational opportunities.

SANCHEZ: The case in New York is likely to drag on. As for the Vergara ruling in California, teachers unions have appealed and Welner says only if the decision is upheld are we likely to see a sea change in teacher tenure and seniority laws. Claudio Sanchez NPR News.

A new salvo has been fired in the fight over teacher tenure. A group led by former TV anchor Campbell Brown filed a complaint in New York state court, arguing that tenure laws are preventing the state from providing every child with the "sound, basic education" its constitution guarantees.

Copyright © 2014 NPR. For personal, noncommercial use only. See Terms of Use. For other uses, prior permission required.

From NPR News this is ALL THINGS CONSIDERED. I'm Ari Shapiro sitting in this week.

And I'm Audie Cornish. We begin this hour with the heated fight over teacher tenure. Today in New York a group of seven families filed a complaint in state courts. They say tenure rules are getting in the way of the state's obligation to give all students a sound basic education.

SHAPIRO: The suit is the latest reverberations from last month's Vergara ruling in California. In that case a state judge said tenure laws violate the right of low income students to get an equal education.

CORNISH: In a moment we'll hear about more tenure challenges that may be in works in other parts of the country. But first Beth Fertig of member station WNYC reports on today's challenge.

BETH FERTIG, BYLINE: The New York lawsuit is notable for its Scope and the people behind it. It was spearheaded by former TV anchor Campbell Brown, through her partnership for educational Justice. And she's relying on pro bono representation from the major law firm Kirkland & Ellis. Attorney Jay Lefkowitz.

FERTIG: The suit notes that more than 90 percent of the state's teachers were rated highly effective or effective in 2012, while just 31 percent of elementary and middle school students scored proficient on their math and reading tests the next year. And it cites data showing disadvantaged students tend to get less effective teachers on average. In announcing the lawsuit, Brown stood with dozens of supporters and the seven parents who have signed on as plaintiffs.

CAMPBELL BROWN: This is not going to be easy and they are so incredibly brave to be taken this on. And I'm so proud to be standing here and supporting them here today.

FERTIG: One of those plaintiffs is Nina Doster, who has three children in New York City public schools. The Queen's mother claims her soon to be second-grader isn't reading on grade level because of his classroom teacher.

NINA DOSTER: She didn't put the effort into it, I've known her since my oldest went to that school and it doesn't seem like she, you know put effort into it anymore.

FERTIG: Doster is also an organizer with the groups "Students First" a frequent critic of teachers unions. The lawsuit is modeled after the Vergara suite in California but there are big differences between the laws in the two states. In California tenure kicks in after only 18 months on the job. In New York it takes three years. New York State has also been using a more rigorous teacher evaluation system. These are just some of the reasons why skeptics believe the suit is likely to fail. Michael Rebell runs the Campaign for Educational Equity at Teachers College at Columbia University. In 2003 he persuaded the state's highest court that New York's funding formula was unconstitutional because it left city schools with outdated textbooks and crumbling facilities.

MICHAEL REBELL: That the courts are willing to take a stand on. Now what the details of that educational program are, you know, what your system is for hiring teachers, what your curriculum is and all these other things. The courts are going to be very wary about getting involved in.

FERTIG: The Teachers Union has also argued that tenure only guarantees due process and isn't a job for life. Critics have questioned Brown's involvement because her own children attend private schools but she says that's precisely why she wanted to help other parents.