July 10, 2014 |Members of the State Board of Education uniformly praised the way school districts have created plans to comply with California’s new school improvement and accountability system, but said Thursday that students should have more of a voice in the process. They agreed to move ahead with modest proposed changes in regulations while counseling patience before making more.

“Trust the process, be patient and thoughtful, not precipitous,” said board member Patricia Rucker.

“We’re close, with narrow areas of disagreement,” board member Sue Burr said, referring to regulations governing the Local Control and Accountability Plans, or LCAPs, that all school districts and charter schools passed for the first time last month. 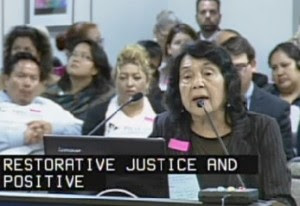 << Source: California Department of Education webcast - Dolores Huerta, co-founder of the United Farm Workers, testifies before the State Board of Education.

The LCAP is a three-year master plan that lays out a district’s budget and academic improvement priorities. It’s a critical piece of the Local Control Funding Formula, the landmark school funding law that reallocates more money for “high-needs” students – low-income children, students learning English and foster youth – and transfers decision-making authority from the state to districts. As part of the shift to local control, the Legislature required that districts reach out to parents, teachers and others in the community in creating their LCAPs.

“We have never seen so much engagement and reaching out. We have changed California with the LCAP,” said Wes Smith, executive director of the Association of California School Administrators.

The state board is in the process of revising the regulations setting out what must be in each LCAP and defining how much flexibility districts have in spending the supplemental dollars generated by high-needs students.

Based on public comments and early LCAP reports from the field, the staff of the state board is proposing changes in the LCAP format to make it easier to read and determine whether a district is meeting its commitments. The staff is also proposing two seemingly small ­changes in wording that are generating some debate.

One change would make explicit the existing requirement that districts consult with students about the LCAP. About 150 students in a Student Voice coalition attended Thursday’s hearing. They included a contingent from Long Beach and Los Angeles that drove all night to make the case that the proposed language doesn’t ensure that districts will involve students in creating their LCAPs, rather than giving them the plans after the fact. 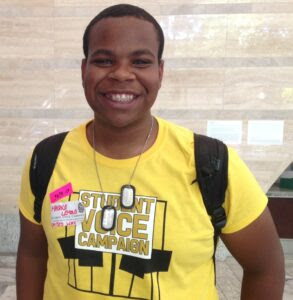 “We no longer want to be students sitting silently behind a desk with our hand held high, waiting to be called on,” said Maurice Lemons, a junior at Hamilton High, an arts magnet school in the Los Angeles Unified School District. “No, we want the opportunity to give input into the system that most directly affects our lives and our futures.”

Board members agreed, encouraging further tweaking of the proposed language. “The intent of the statute was to engage students early in the process and not merely present (the LCAP) toward the last week of school,” said board member Bruce Holaday.

The other proposed addition of a half-dozen words reflects ongoing disagreement between advocates for low-income children and organizations representing school boards and superintendents. The advocates want a detailed accounting of how money is spent on high-needs students, while the school officials’ groups argue the LCAPs should focus on academic results for underserved students, not dollars. Gov. Jerry Brown and the state board have sought a balance between the two camps, and the current regulations reflect that tension and ambiguity.

The proposed change, which the advocates groups support, would require districts to spend supplemental dollars in ways that are both “principally directed” toward high-needs students and “effective in meeting the district’s goals” for those students.

Brian Rivas, director of policy and government relations for Education Trust-West, which advocates for low-income and minority children, said the intent was to prevent districts from steering supplemental dollars toward across-the-board staff raises or debt payments that don’t primarily benefit high-needs students. John Affeldt, managing attorney for the nonprofit legal organization Public Advocates, said the new wording wouldn’t hinder the flexibility of districts to spend money on programs benefiting all students, but it would force them to justify the rationale to the community.

But more than two dozen superintendents and school board members testified that the proposal would be too restrictive. They said it would be the first step toward turning the LCAP into “just another compliance-based document” and a potential source of litigation. 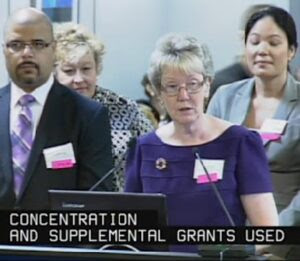 “In our view, the term ‘principally’ is subjective and its insertion will result in less, rather than greater, transparency,” said Josephine Lucey, president of the California School Boards Association. “This term distracts from the goal (of the funding formula) –  to improve student outcomes and close achievement gaps – and begins an erosion of local decision-making.”

The issue remains unresolved. The proposed changes will be open to an additional 15 days of public comment. Burr said she wants superintendents to be specific about how “principally” would limit their decision-making. The state board will vote on the language in either September or, if there are further changes, in November.  A coalition of civil rights and advocacy groups is expected to propose additional changes, including a requirement that the LCAP detail all expenditures using supplemental funding.

Superintendent after superintendent praised the LCAP process and said it is working to engage parents and create new goals for student achievement.

Holding up a copy of his district’s LCAP, Morgan Hill Unified Superintendent Steve Betando said, “We made a commitment to engage our community and we did,” through six months of intensive meetings and daily conversations.

“We have never seen so much engagement and reaching out,” said Wes Smith, executive director of the Association of California School Administrators. “We have changed California with the LCAP.”

Board member Carl Cohn didn’t stop there. “This is the most exciting thing in American education today and makes me proud of our state. This is really big change.”

But there also critics and skeptics – parents who complained that their districts ignored them and that the LCAPs weren’t translated or written in plain language. San Jose Unified parent Jackie Gamboa said she didn’t understand her district’s LCAP after reading it a half-dozen times. In Stockton Unified, said Cynthia Chagolla, an attorney with California Rural Legal Assistance, “Parents had been told there was a place at the table but promises were broken.”

Dolores Huerta, the civil rights leader who cofounded the National Farm Workers Association, which later became the United Farm Workers, also spoke at the board meeting. Kern High School District – her local district – has one of the highest student suspension and expulsion rates in the state, she said. Instead of adding counselors, it is spending money on security. Instead of directing money to low-income students it is spreading supplemental money across all students, she said.

“What more can we do to make our high school district follow the guidelines?” she asked.

Board members struggled with the same issue – what to do about those districts that don’t follow the rules and are, in Cohn’s words “a poster child for bad behavior.” Who should respond, he asked: the state, the county office of education, the California School Boards Association?

It’s the job of county offices of education to monitor districts and respond to problems, other members said. However, they said at this point they didn’t want to change regulations in response to the worst cases.

“We should not remediate too fast,” said board member Ilene Straus. “We have 1,000 districts.”