Benjamin Brayfield/KPCC | Arianna Anderson, 9, looks at a book at the Torrance Public Library. Her parents, Hilda and Brent, worry she is losing her love of reading, because the school is not providing services tailored to her needs.

Benjamin Brayfield/KPCC | Brent Anderson looks at books with his daughter, Arianna, at the Torrance Public Library. Anderson encourages her to select books based on her interests. Horses are high on the list.

Benjamin Brayfield/KPCC | Hilda and Brent Anderson walk with their daughter, Arianna. They've spent years trying to remove Arianna from LAUSD's English learner program with little to show for it except a six-inch-thick folder of documents.

Benjamin Brayfield/KPCC  Arianna Anderson listens to the hula instructor at George Nakano Theatre at the Torrance Cultural Arts Center. When school is a struggle, she finds refuge in a variety of art activities in the afternoons.

Benjamin Brayfield/KPCC Arianna Anderson takes a hula class at the George Nakano Theatre at the Torrance Cultural Arts Center. The daughter of a Hawaiian father and Mexican-American mother, Arianna has spent five years in the Los Angeles Unified school district's English learner program. The Andersons believe she didn't belong there in the first place.

Over 90 percent of students in the program speak Spanish. Most everyone else speaks Armenian, Korean or Filipino.

"I'm not an English learner," the 9-year-old said with a shrug.

The daughter of a Hawaiian father and Mexican-American mother, Arianna was raised speaking English, from the breakfast table to bedtime prayers.

Yet, every day for the last five years, she has been pulled out of her regular class at Van Deene Elementary in Torrance for an hour to get special tutoring for children who speak English as a second language.

It's impossible to tell how many other Los Angeles Unified students are mislabeled and receiving the wrong instruction. District officials said Arianna's case is unique — but acknowledge the English learner program has been poorly supervised in the past.

A review of L.A. Unified's program by the U.S. Department of Justice's Civil Rights Division in 2011 found neither state nor district officials were effectively monitoring student progress, resulting in students labeled English learners falling further and further behind without intervention.

Arianna has spent five years in the program. The district began investigating her case this spring and declined to comment on its status. But it appears she will still be labeled an English learner when she starts 5th grade in the fall.

Easy to get in

A single form triggered Arianna's ultimately being labeled an English learner: a home language survey. It was buried in the stack of forms all California parents have to complete when enrolling kids in school for the first time.

The form asks what languages are spoken at home. School staff use the survey to figure out who needs help learning English.

As one of three and half million immigrants in Los Angeles County, Arianna's mom, Hilda Anderson, indicated that English and Spanish are spoken at home.

“I was an English learner, like, 30 years ago," said Anderson, now fluent in both languages.

Most parents in Los Angeles County speak a foreign language, though often in addition to English. Less than half of the county population speaks English only, according to Census figures.

If a language other than English is reported on the form, California requires schools to gives students an English proficiency test.

Last year, L.A. Unified tested twice as many kindergartners as the year before and more than four times as many as were tested in 2010.

Census figures do not jibe with the upswing. Since 2007, the number of children born to immigrant families in L.A. County has been on a slow decline.

Of L.A. Unified kindergartners who were tested for English proficiency, 70 percent of scored intermediate or worse on the test, state records show.

Some parents and educators said the test is too hard for most 4- and 5-year-old children, even native English speakers.

“I’ve had plenty of English-speaking kids that don’t pass it just because they are immature," said Cheryl Ortega, who began teaching English learners 43 years ago and recently retired from Los Angeles Unified.

“How is a child that has never been to school going to know punctuation?” Anderson, Arianna's mom, asked.

The state is developing new tests for the 2016-2017 school year based primarily on listening and speaking skills for the youngest students. Until then, the misaligned test remains in place.

Parents and advocates claim schools rarely comply, and English learners are often deprived of enrichment activities and even time in core subjects such as science.

Hilda Maldonado, the director of the Multilingual and Multicultural Education Department at L.A. Unified, said that's not true. California requires teachers to give all students the same content, even if that means recasting a science lesson to meet the needs of English learners, she said.

"In essence, they won't miss out because teachers will be addressing their content while addressing the language demands in the content," Maldonado said in an email.

Parents grumbled that one only needed to show up with the last name Garcia or Rodriguez to trigger the English learner enrollment process, putting bilingual kids behind their English only peers.

"Secluding them in a classroom, the first thing that comes to mind is segregation," said Cindy Aranda-Lechuga, whose child goes to Granada Hills Elementary Community Charter School. "A lot of parents are feeling that way."

Studies show the longer these students stay in the program, the wider the achievement gap grows between them and their mainstreamed peers.

A focus on quality

“Why in god's name do we want to get them out of the program as quickly as possible, lose the funding and support rather than examining what we can do for these kids to make sure they are competitive?” asked Patricia Gandara, the director of the Civil Rights Project at UCLA.

Gandara's own bilingual kids nearly got labeled English learners. She raised them speaking English and Spanish. She said the research is clear: Bilingualism can support superior academic gains.

But when the school started asking about English proficiency, Gandara stepped-in, and the process stopped before her children were given the English test. Parents have a limited window of time to dispute the enrollment process, but it's unclear to what degree they are informed of that right or the consequences.

In Los Angeles, where 34 percent of children live in poverty, Gandara said many parents should welcome the tutoring that comes with being designated an English learner.

“My read is that you get labeled [an English learner], which means you are going to get extra support, which means someone is going to provide this targeted English instruction for you and you should get access to every thing every other kids get,” she said.

In Arianna's case, the tutoring isn't helping. She's still not doing well in school. But it's unlikely she'll be leaving the English learner program anytime soon.

Even though Arianna was mislabeled, California law prohibits L.A. Unified staff from moving her over to the mainstream until all proficiency requirements are met.

That means she'll have to pass the California English Language Development test for older students, which has more challenging questions. She'll also have to show she knows the basics of 5th grade reading and writing on the new Common Core test given to all California students.

Anderson, Arianna's mom, said if she had known the heartache ahead, she never would have told the district of the family's bilingual background.

"You just start filling this stuff out, and they don't tell you what's going to happen to your kids," she said. 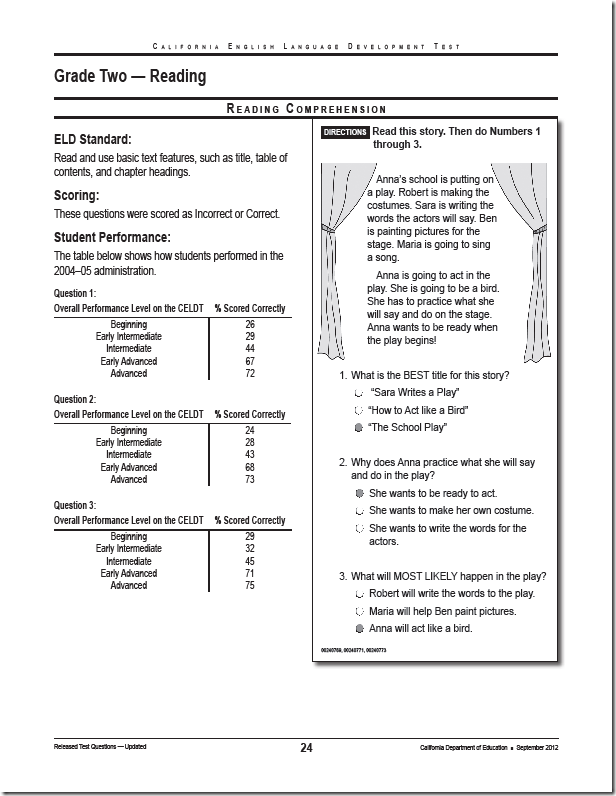