10:07 p.m. PDT July 7, 2014  ::  Two desert school districts have been named in a far-reaching class-action lawsuit over inadequate physical education, but the suit springs from a tight-lipped nonprofit with no apparent past.

Desert Sands Unified and Palm Springs Unified are among three dozen school districts that have been sued by Cal200, a group that says it intends to "raise awareness" for physical education but has no public presence as an advocacy group.

The Cal200 lawsuit [Cal200 Et Al v. San Francisco Unified School District Et Al, Superior Court of California, County of San Francisco, Case No. CGC 13 534975 (legal history)]  was filed last year, but its largest impact came last month. As classes came to a close, hundreds of local teachers were ordered to save all lesson plans and scheduling documents from the past school year. These documents could be used as evidence if the lawsuit ever goes to trial.

Cal200's president, Marc Babin, refused in an email to be interviewed about the organization and the lawsuit. The group would not provide details about its membership, history or other basic information.

But others have not been hesitant to talk. An attorney for the local districts said Babin had "no relationship" to the desert schools he has chosen to sue. One local education official said he believed Cal200 had filed a "low-hanging fruit" lawsuit designed to profit from legitimate, widely known problems with physical education.

"I just think they are trying to get going-away money," said Mark Acker, president of the Palm Springs Teachers Association.

The Cal200 lawsuit, which was filed in San Francisco County Superior Court in October, accuses school districts of not providing students with enough PE minutes. State law requires districts to provide 200 minutes of PE every 10 days, or an average of 20 minutes a day.

A few years ago, as the economic recession whittled away at state education funding, many elementary schools shifted more of the responsibility for PE onto classroom teachers. Under this system, students would spend a limited amount of time with a specialized PE teacher once or twice a week, and then their regular teacher would add more physical activity into the classroom routine.

The plan works on paper, Acker said, but in reality, many teachers are stretched too thin to provide the PE minutes. Teachers are under constant pressure to produce high-testing students, so some have sacrificed PE minutes so they could have extra time for English or math, Acker said.

"When you ask teachers about all the mandates they have, all the things they have to do, are there enough minutes in the day? They will say, 'No, there are not.' You would need an extra four hours to get it all done," Acker said. "That's why this lawsuit is low-hanging fruit. Everybody knows that PE has been pushed aside. People saw this coming, and it was avoidable."

In addition to Palm Springs Unified and Desert Sands Unified, the Cal200 lawsuit includes Los Angeles Unified — the second-largest school district in the nation — San Francisco Unified, Riverside Unified and San Bernardino City Unified. All of the districts have denied they violated the law, and some have launched more than a dozen other legal defenses, according to court documents.

Donald Driscoll, an attorney for Cal200, insists the truth will lie in the lesson plans.

During an interview with The Desert Sun, Driscoll said the school districts named in the lawsuit insist they are providing enough PE, but that teachers' lesson plans will reveal what is really happening in the classroom. A school district may be willing to lie about how much PE is provided, but teachers would have no reason to lie to themselves in their own planning documents, Driscoll said.

"School districts, as a whole, tend to claim they are providing enough physical education … but as you work down through a district, you discover that less and less PE is being given," Driscoll said. "The district claims they provide (enough minutes,) then principals claim less and the teachers say even less than that. And closest you will ever get to the teachers are their lesson plans."

The task of preserving lesson plans will be different for every teacher because there is no uniform format for these documents. For example, teachers who plan their lessons on a computer will simply need to maintain their files, but a teacher who prefers to work with paper could end up holding on to hundreds of pages of documents. And teachers who delete their plans on a regular basis might not have anything to save at all.

According to the court order, teachers are only required to save the documents they still have, but they do not have to produce anything that already was destroyed. The court order only affects teachers in first through sixth grades.

Desert Sands received a sampling of teacher lesson plans in December as a part of a separate stage in Cal200's PE lawsuit. The district turned over two weeks' worth of lesson plans from teachers who led PE lessons. The results were a mixed bag: Some teachers kept electronic documents; some kept hard copies; some plans were meticulously detailed; others were bare bones.

Linda Christian, Desert Sands' director of state and federal programs, said many teachers organize lessons in a weekly schedule in a computer template, erasing the plan from the prior week as they rewrite the schedule each week.

"Honestly, I would still be keeping my lesson plans in a spiral-bound book," Christian said. "But we are in 2014, and many teachers are younger than I … and many younger teachers are savvy with technology, and they might not save their plans the same way week after week."

Although Cal200 says it is an organization that advocates for children's right to physical education, it appears the recent class-action lawsuit is the first and only advocacy action ever taken by the organization.

The organization's website, Cal200.org, is equally sparse. The site includes only vague descriptions of the group's mission, and makes no mention of the lawsuit. The site does not identify any of Cal200's leadership or members and provides no contact information for anyone.

The site is mostly filled with dead hyperlinks, images of children copied from unrelated websites and brief quotes from unidentified teachers.

"We have one, 40 minute PE period per week … more PE time would be a blessing," the website states, attributing the quote to an unnamed teacher from Palm Springs Unified.

The Cal200 website was created in April, and whomever launched the site paid extra to keep their identity private by routing the domain information through a forwarding service.

The only contact information available for Cal200 is an email address, Cal200@outlook.com, which Babin used on some public records requests. The email address redirects to Driscoll, the Cal200 attorney.

The alert states that Cal200's strategy is to have its attorney contact teachers by email "asking them casually about the weekly physical education." If teachers respond by saying the PE minutes are insufficient, then Cal200 follows up with a public records request "under the name of Marc Babin." Lawsuits are filed after the school districts respond to what "appears to be a harmless public records request," the claim alert states.

The progression from records request to lawsuit is exactly what happened in Desert Sands and Palm Springs Unified. Both districts received a public records request about PE minutes last year, followed shortly by the Cal200 lawsuit.

Gary Rutherford, superintendent of Desert Sands Unified, said he didn't know the motivations behind the Cal200 lawsuit, but it was not uncommon for school districts to receive "cumbersome" public records requests from groups who were hoping to sue.

"These requests typically come from law firms, seeking detailed information on a large number of unrelated topics," Rutherford said. "It can take hours, and sometimes weeks, of research and archival work to fully respond to these requests. To be frank, these types of inquiries feel like a 'fishing expedition' — a lawsuit in search of a cause."

When questioned last week, Driscoll declined to say how Cal200 had chosen which districts to sue. He said the organization had "evidence" against some districts, but refused to provide more detail.

The third desert school district, Coachella Valley Unified, is not included in the lawsuit.

Amelia Yurch, an attorney who represents Palm Springs and Desert Sands districts, said she didn't know why Cal200 had targeted them. Yurch also said Babin has "no relationship" with either of the local districts.

"This lawsuit is being brought by a person that, to our knowledge, resides in San Francisco County, and it's unfortunate that he is bringing it against school districts not in his area," Yurch said. 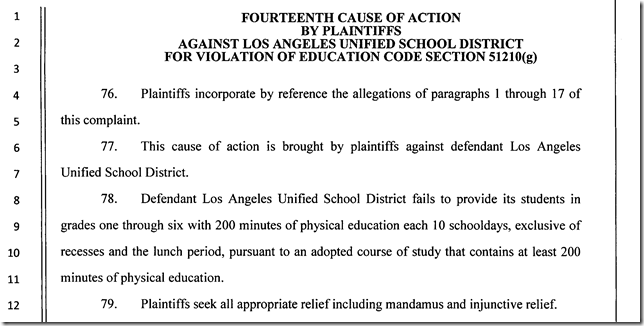 And there is no non-profit called CAL 200 registered with GuideStar.