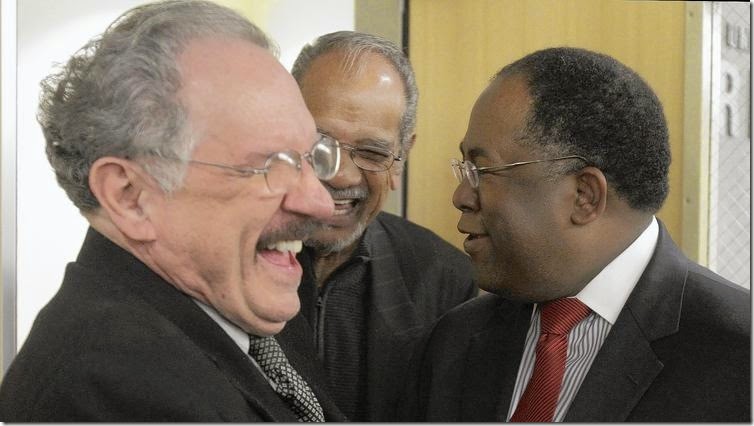 July 22, 2014  ::  A new political action committee has formed to influence the outcome of Los Angeles school board races, filling a gap created when a group of civic leaders, which includes former Mayor Antonio Villaraigosa, decided to sit out next month's key upcoming election.

The new campaign committee is controlled by Dan Chang, who most recently headed the nonprofit foundation created to raise money for the L.A. Unified School District.

Through last weekend, Chang had reported raising nearly $100,000 in support of Johnson.

Chang's operation is vying to fill the void left by Villaraigosa, who left the mayor's office in 2013. As mayor, Villaraigosa acted as chief fundraiser of Coalition for School Reform, a political action committee established as a counterweight to the teachers union, United Teachers Los Angeles.

The coalition delivered mixed results, with Villaraigosa winning an allied board majority early on, then stumbling in some later elections despite record fundraising, including $1 million from then-New York City Mayor Michael Bloomberg.

The teachers union also has been unable to dominate, resulting in a politically divided school board.

Chang lists his contributors as including former U.S. Ambassador Frank Baxter, a charter-school funder, who donated $10,000 to the new venture after regularly supporting Coalition for School Reform.

The teachers union is backing McKenna. Through last weekend, UTLA's committee had spent $75,215 on his behalf.

District 1 covers a swath of south and southwest Los Angeles. The late LaMotte frequently criticized L.A. schools Supt. John Deasy; her successor could become a swing vote on such Deasy initiatives as using student standardized tests as part of a teacher's evaluation.

Johnson, 34, has declared himself a strong supporter of Deasy. McKenna, who worked directly under Deasy before he retired, has been less enthusiastic, but said he would not push for the superintendent's removal.

The campaign of McKenna, 73, has relied on community ties built over decades as an educator rising through the ranks. A product of L.A. Unified, Johnson spent much of his career dealing with education-related issues, most recently in Los Angeles.

Ridley-Thomas' backing has contributed to a huge financial advantage for Johnson. In the primary, Johnson outspent McKenna $413,000 to $215,000.

In the runoff, spending has shifted to organizations not controlled by candidates, again with Johnson claiming an advantage.

The effort would "begin to fill the pipeline with people interested in education reform," attorney Virgil Roberts said.

Roberts is one of three controlling members of Coalition for School Reform, along with attorney Charles Shumaker and Robin Kramer, a top official under former mayors Richard Riordan and Villaraigosa. Both mayors raised funds to influence school board races. Current Mayor Eric Garcetti has not pursued such a role.

Roberts said the coalition gave Chang a "six-figure donation" for his long-term work, but had no preference in District 1.

In recent elections, the coalition focused on backing candidates who vowed to support Deasy. Roberts said the coalition, with Villaraigosa's participation, would be reactivated in future races.

Through a spokesperson, Villaraigosa said he intended to remain involved in issues affecting district leadership.

Before deciding to back Johnson, Chang had been involved earlier this year in nonpartisan organizing for a group called Moms Unite. Prior to that, Chang, 38, was the first executive director of L.A. Fund, an independently controlled group that raises money for projects within L.A. Unified. Chang also has been an executive with a charter school company, Green Dot, and with L.A.'s Promise, a nonprofit that manages three L.A. Unified campuses.

Other campaign committees also have entered the fray for Johnson: African American Voter Registration, Education & Participation Project, founded by Ridley-Thomas, has given more than $195,000; a charter schools committee has put more than $61,000 into the runoff after spending $54,323 in the primary.  [smf - see: McKenna is the union candidate, but CTA gave to Johnson backers | http://bit.ly/WW2XEF]

Right-winger Daniel Chang is the Green Dot executive who defended their forcing students to pledge to capitalism. Professor Ralph Shaffer appealed to Green Dot and LAUSD until the vile language was removed. http://www.sfgate.com/bayarea/article/Time-to-regulate-what-charters-are-teaching-3269715.php.