DISTRICT ONE RACE NOW ALSO A REFERENDUM ON DIRTY POLITICS

Ridley-Thomas/Alex Johnson’s smear tactics are a disservice not only to George McKenna, but to the children, parents and residents of District 1, who deserve the opposite, i.e., strong, caring and ethical leadership.

Opinion by Larry Aubry in the L.A. Sentinel |  http://bit.ly/1othFNP 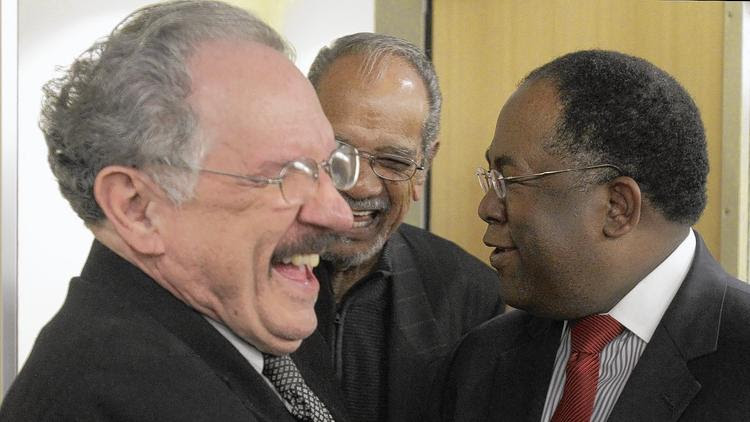 HAPPIER TIMES: George McKenna, left, in January 2013 with former Inglewood school board member Larry Aubry  (the author of this Op-Ed)  center, and county Supervisor Mark Ridley-Thomas, before Ridley-Thomas' deputy Alex Johnson and McKenna wound up running against each other for an L.A. Unified school board seat. (Lawrence K. Ho / Los Angeles Times)

Published on Friday, 25 July 2014 01:12  ::  The runoff election to fill the unexpired term of deceased LA school board member Marguerite Poindexter LaMotte is now also a referendum on big money and sleazy politics orchestrated by Los Angeles County Supervisor Mark Ridley-Thomas. His candidate is Alex Johnson.  Their opponent is Dr. George McKenna whose campaign stays focused on his vast experience and doing what’s in the best interest of children.  But the Johnson/Ridley-Thomas campaign is employing unconscionable smear tactics, the likes of which Los Angeles has not seen in a long time. Make no mistake, though, Johnson is the messenger; the one shoveling dirt is the Supervisor.

Ridley-Thomas has been executing this game plan since just after Marguerite LaMotte died.  He immediately set out to block an appointment to fill the vacant seat in District 1 which would the chances of a propped-up candidate winning a special election.  (Practically all of the local and state Black elected officials and other prominent Black leaders quickly agreed to oppose an appointment, most not realizing that would deny District 1 representation for 8 months. During that time decisions were being made on major issues like common core standards and the Local Control Funding formula designed to direct funds to students most in need. This made no difference to Ridley-Thomas who pitched a bogus argument that an appointment would deny voters’ constitutional rights. It seems Ridley-Thomas’ motivation is to flex his political muscle by controlling a seat on the Los Angeles School Board. Alex Johnson is just carrying his boss’ water- he’s the Supervisor’s education staff person. But is Ridley-Thomas himself a pawn beholden to billionaire supporters of charter schools and privatization? Consider Alex Johnson’s contribution lists.  Even the handful of “educator” endorsements (McKenna has nearly all of them), is part of this cabal—former LAUSD Board president Marlene Cantor sits on the Green Dot Charter School board and another former board president, Caprice Young, founded the California Charter School Association.

These are people who lean to privatization and profit, in effect, discriminating against our children by pulling valuable resources away from traditional public schools.  Other Johnson contributors include Black preachers, some of whom have charter schools themselves; others have regular dealings with the Supervisor, and a handful of “community leaders,” who are largely the public front.

The inevitable conclusion: Ridley-Thomas aligns himself with big money and corporate support in an attempt to expand his faux- kingdom. All of this is contrary to the supervisor’s long-stated concern for moral and ethical leadership.

Now, the Ridley-Thomas/ Alex Johnson’s campaign is so desperate they are willing to smear, lie and censor.  They are saying George McKenna has failed to protect children, was personally sued for covering up allegations of child molestation and that he falsified grades and graduation rate, all false. Its manufactured dirt by a desperate campaign hell-bent on electing a  weaker candidate ostensibly to further the Supervisor’s aspirations.

He was undoubtedly ticked- off by McKenna’s primary victory and is gambling that money and more money is the only way to win this election. The most recent report from the City Ethics Commission shows monetary contributions and Super Pacs independent expenditures (allowed unlimited contributions) shows the difference between the two campaigns’ money-raising efforts is huge.  The Johnson/Ridley-Thomas Super Pac exceeds McKenna’s campaign’s by over $200,000. Yes, the “czar” is determined to have his way, only this time, hopefully, that will not happen.

Obviously, the objective of the Ridley-Thomas/Johnson campaign is to erase McKenna’s 20% margin of victory in the primary and win the election, not only with big money but mud-slinging too.  However, as Lincoln said, “You can’t fool all of the people all of the time.”  People are vulnerable but they are not stupid, and judging from reports throughout District 1 of residents’ displeasure with the annoying flood of mail and multiple knocks on their door, the big money/smear campaign might just backfire.

Alex Johnson seems like a bright and personable young man whose misfortune is having been pushed into an extremely untenable situation.  He is up against George McKenna, whose qualifications for the seat are so far superior, there’s simply no comparison. McKenna’s vast experience as teacher, administrator, and proven record of service and commitment to children, is legendary. But qualifications were never the issue for the Supervisor; he wants his  man on the school board, period. ( I wonder if he has any qualms about the campaign’s attempting to damage the reputation of his longtime friend?)

Ridley-Thomas/Alex Johnson’s smear tactics are a disservice not only to George McKenna, but to the children, parents and residents of District 1, who deserve the opposite, i.e., strong, caring and ethical leadership.  As the driving force behind Johnson’s campaign, the   Supervisor shares responsibility for such tactics but probably will never publicly denounce their being used I this campaign.  The fundamental issue in this election is leadership, Black leadership especially. Does anyone actually believe the Ridley-Thomas/Johnson smear tactics benefit the Black community, or District 1, in any conceivable way? I think not, and that’s another reason Dr. George will win this election. Everyone knows God does not like ugly.