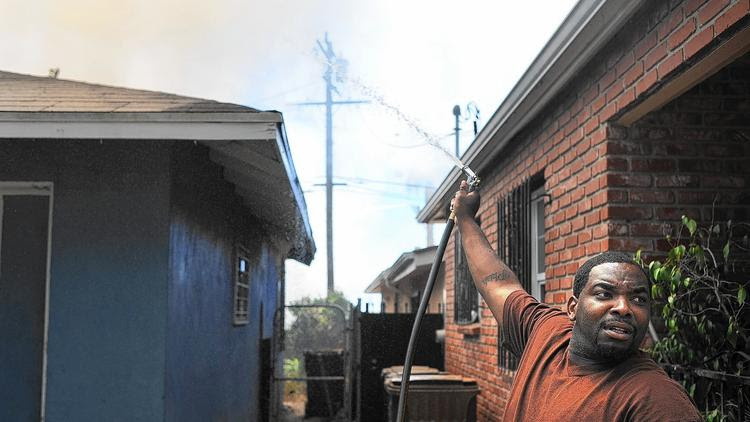 23 July 2014  ::  A local charter school organization is scrambling to find an alternative location after a midday blaze swept through one of its campuses on Tuesday.

Animo South Los Angeles Charter High School has about 600 students enrolled but was on summer recess when the blaze was reported at 2:20 p.m. 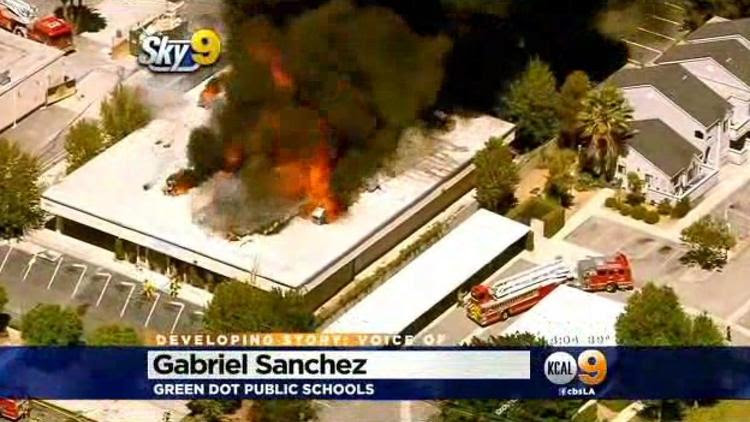 Roughly 30 minutes after the fire was reported, the building's roof caved in and the school's facade also collapsed. The cause of the fire is under investigation. Officials had not determined late Tuesday if the structure, at 11100 South Western Ave., is a total loss.

Two firefighters suffered minor injuries. The building was presumed to be empty, but firefighters must still sift through debris to be sure, Miller said.

"My biggest concern is that no one is in the building," said Marco Petruzzi, chief executive of Green Dot Public Schools, which operates the campus, located east of Inglewood. Petruzzi, out of town on vacation, spoke as he watched the flames on a television feed.

The next step is determining how to begin the coming academic year Aug. 12, said Cristina de Jesus, who heads the group's California schools.

"We have already begun to notify parents of the incident and will keep them updated on our contingency plans," she said.

With 21 schools, Green Dot is one of the largest charter organizations in California and recently announced an out-of-state expansion. Charters are free, public schools that are exempt from some regulations that govern traditional campuses.

The school was undergoing some renovation over the summer that involved reconfiguring internal walls to create space for an extra classroom, Petruzzi said.

The Green Dot organization suffered another tragedy in April, when two students from Animo Inglewood Charter High School died in a fiery bus crash in Orland. They were part of a group of students on a trip to visit Humboldt State University. Two adults with ties to Green Dot also were killed.

In academics, Green Dot's schools have generally compared favorably with nearby campuses. One study, released this week, concluded that students attending three Green Dot campuses were less likely to engage in extremely risky behavior than similar students attending other schools.

22 July 2014 |  7:38 PM  ::  A mystery drone was seen hovering over the scene of a massive blaze as it tore through a South Los Angeles charter school Tuesday afternoon.

The small drone seen on KTLA-TV shows the craft flying above a plume of smoke and the curling flames at Animo South Los Angeles Charter High School.

Los Angeles police and fire officials said the drone did not belong to them and that they don't who was operating the craft.

As the drone hovered over the blaze, about 34 firefighters took a defensive stance against the flames. 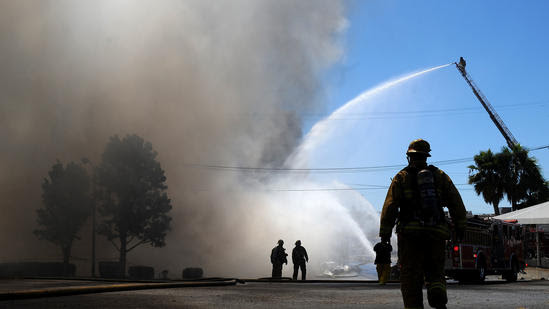 The fire, which started about 2:20 p.m., consumed the school's roof, ultimately causing it to collapse. A wall and the school's facade also collapsed in the flames, Los Angeles County Fire Inspector Scott Miller said.

Two firefighters suffered minor injuries battling the blaze and were taken to hospitals, he said.

For now, Miller said it appears no one else was hurt in the blaze but cautioned that firefighters must still sift through a large amount of debris.

The campus was closed at the time of the fire but some construction was underway, said Gabriel Sanchez, Green Dot Public School spokesman.

Firefighters are investigating the blaze.