By The Los Angeles Times Editorial Board | http://lat.ms/1oHUdbq 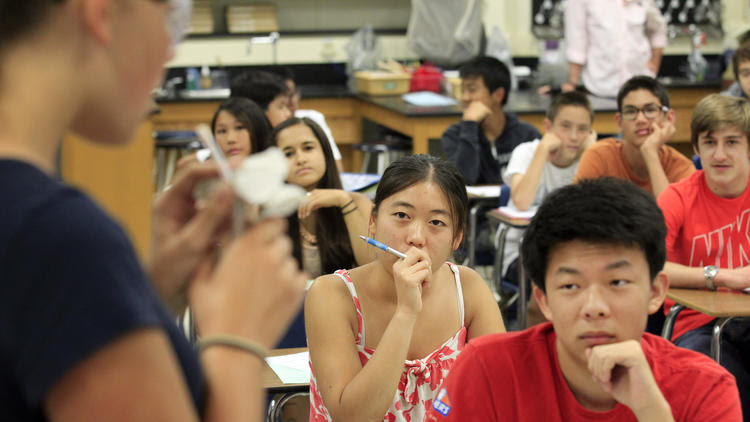 July 16, 2014  ::  Children in the United States get unequal educations; that's unfair but unlikely to change in the near future. Some school districts have more money to spend than others. Wealthy parents can sign up their children for private tutoring. In some districts, not-for-profit private foundations established by parents raise funds for art, music and other programs that the local public schools otherwise couldn't afford.

Public schools shouldn't play along with a system that gives some students an academic head start over others.

It's laudable when parents do all they can to bolster their children's education. But they go too far when their foundations, which supposedly exist to help all students in the district, offer for-credit classes only to those students whose parents can afford to pay for them. Public schools shouldn't play along with a system that gives some students an academic head start over others.

It's happening this summer, according to a story in The Times  [Private summer schools prompt debate on education inequality] on Saturday. Parent foundations in generally affluent areas in Southern California are offering academic summer school classes to help students finish required courses so that, during the school year, they can polish their resumes with more Advanced Placement classes or raise their grades in courses already taken. The classes are for the most part conducted on public school campuses, taught by the school's teachers, with full academic credit granted by the school. But they're officially offered by the private foundations, with prices of $600 to $800 each. Sometimes there are scholarships for needy students, sometimes not.

These private classes for public school credit are an end-run around state law that says public schools cannot charge for classes, required course materials or extracurricular activities. Parents, of course, should be welcome to donate money for the creation of programs open to all students within a district, but school districts should not be enabling parent groups to offer for-credit courses that are not available to all students.

Obviously, the problem is lessened if the foundations offer scholarships to any students who need them, and if they guarantee that access to the classes won't go first to those who pay. If scholarships are offered, it is important that they be processed in a way that doesn't stigmatize families or force them to divulge sensitive financial information.

Yet even with those safeguards, it is still troubling that budget woes are prompting public schools, in essence, to privatize their most basic function: offering academic classes for credit to students.

smf: A commenter on The Times website opines: “Kids with smart parents are going to get better educations than kids with dumb parents.”  There is no arguing with this – and no amount of do-goodery or social engineering will undo it.

It is just as true to say that  “Kids with well-off parents are going to get better educations than kids with poor parents.”

Academic summer school programs for credit – when attendance and the grade goes down in that all-important “Permanent Record” – are a far cry from  a summer playground program or after school math tutoring or a dance class or chess club.

These inroads made by private educators into public education leverage pocketbook-driven-parent-involvement – whether of the garden variety bake-sale-and-gift-wrap-drive fundraising model or the pay-extra-for-extra-stuff-model for profit. And using public facilities – and with little or no benefit to students whose parents cannot afford for them to participate – is (for lack of a better word): wrong.

Not evil or illegal or immoral or unethical – wrong. The thing we – parents, teachers, the community - need to teach our kids the difference between right and.