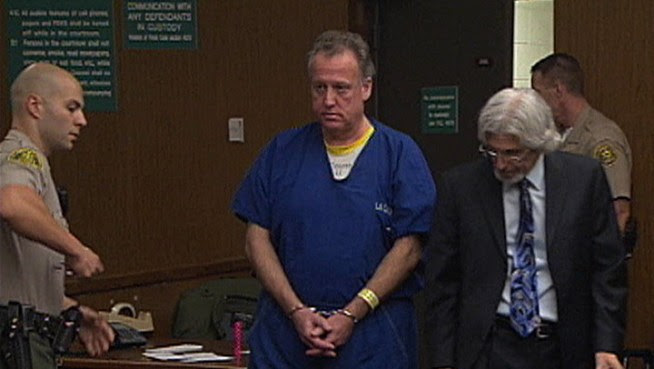 Paul Chapel III is sentenced on Sept. 20, 2012 in connection with molesting his students at Telfair Elementary School in Pacoima.

Thursday, Sep 20, 2012  |  Updated 1:55 PM PDT  ::  A former third-grade teacher at Telfair Elementary School in Pacoima was sentenced on Thursday to 25 years in prison and was ordered to register as a sex offender for life for molesting 13 former students.

Paul Chapel III, 51, of Chatsworth, was arrested in October in connection with allegedly sexually abusing four minors. News about the arrest was not disclosed until February, garnering complaints from parents.

“Hopefully he will spend the rest of his life in prison, never getting another chance to hurt another child,” said Thomas Cifarelli, an attorney who is representing two former students who are suing Chapel -- and the Los Angeles Unified School District -- in civil court.

An LAUSD attorney did not return a call seeking comment.

"If he wanted to do any of these things, the best chance he had was me," said the son, who was adopted when he was 9-years-old, about the same age as some of the students. "He's not that kind of person."

According to the civil complaint, the students were 8-years-old at the time they allege their teacher forced them to sit on his lap while he kissed and fondled them in class during school hours.

The complaint, filed in Los Angeles Superior Court, also claims the Los Angeles Unified School District negligently hired and retained Chapel and should have known he had a history of sexual abuse cases in court.

Chapel was fired from his job in March and his teaching credential was suspended.

The complaint alleges the district hired Chapel despite the filing of a civil case against him for making sexual jokes and showing a sexually explicit video to Chaminade High School students in 1987. Chapel lost that case and paid the plaintiffs $57,000.

The complaint also alleges the district should have known that Chapel was prosecuted in 1997 for sexually molesting an 8-year-old family friend during a sleepover. The day of his arrest on Feb. 27, 1997, the district transferred Chapel from a classroom to an administrative office.

At the time, the state suspended his teaching credential.

Following the criminal trial, which ended in a hung jury, the district lifted Chapel’s suspension and he was allowed back into the classroom. He was reassigned to Telfair and reported to work on Oct. 9, 1998.

Chapel pleaded no contest Aug. 20 to 13 counts of lewd act on a child -- one involving each of his victims. The crimes occurred between September 2006 and April 2011 and involved children between the ages of eight and nine, according to the District Attorney's Office. Chapel was initially charged last fall with sexually abusing three girls and a boy. In May, prosecutors added charges involving nine other children.