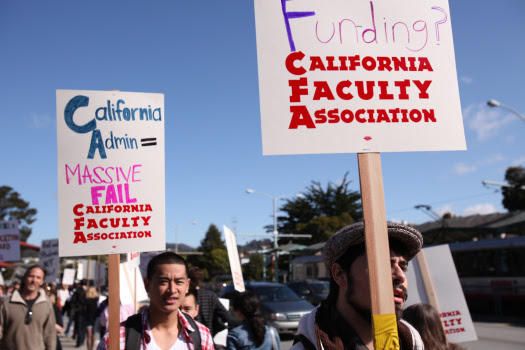 paulbothwell/Flickr  ::  Members of the California Faculty Association at a protest last year. The California State University trustees want to warn students that enrollment and other cuts are likely if voters do not approve an education tax increase on November's ballot.

Sep 18, 2012 :: People fired off a lot of gun analogies at the California State University board of trustees meeting on Tuesday.

Cal State system chancellor Charles Reed told members of CSU’s finance committee that the university needs to raise undergraduate tuition by 5% in case Proposition 30 – a tax increase for education measure – fails at the polls in November.

“There is an automatic trigger and nobody has to do anything. It gets pulled midnight November 6th. The Department of Finance will notify the CSU that we will need to cut our budget an additional $250 million,” Reed said.

To dodge that bullet, Reed said, the university needs to raise revenue with tuition increases.

If Prop. 30 wins, Cal State roll back a nine percent tuition increase that hundreds of thousands of students have had to pay starting this semester. But the 15 Cal State Trustees and the presidents of the 23 campuses - a ready force of high caliber campaign workers – must adhere to limits on how strongly they can advocate for the ballot measure.

They may have tested the advocacy line this week, officials of the Howard Jarvis Taxpayers Association said Cal State say. At issue for the association is the draft of a letter the university plans to send to undergraduate applicants. The letter warns that the failure of Proposition 30 on November 6th would lead to fewer openings for students in the Cal State system.

Jon Coupal, president of the taxpayers association, said that letters’s a misuse of public money. “This has clearly crossed the line into political advocacy, using taxpayer resources to do so,” he said.

Coupal isn’t against Cal State giving out information without references to Proposition 30. “We’re hopeful that CSU personnel will change their minds and either redraft this letter or not send it out at all,” Coupal said.

Advocating for Proposition 30 was very much part of the discussion at the Cal State trustees meeting on Tuesday. Trustee Roberta Achtenberg defended the Cal State letter.

“I don’t believe we crossed the line by telling students and their families what they would have to expect in the event that Prop. 30 failed. I think that’s just prudent policy. I think they’re squawking because they don’t want to see any tax increase of any kind for any purpose,” she said.

As Cal State trustees do all they can to let Californians know about the consequences if Prop. 30 fails, they're also aware of how hard it may be to convince voters that a tax increase is a good idea.

John Orr, a steward with the California State University Employees Union, said trustees could be doing more to educate people about Proposition 30.

“A lot of the polls say it’s passing but that it’s by such a small margin,” Orr said, “of course I’m worried.”