ARE WE ASKING TOO MUCH FROM OUR TEACHERS?

Op-Ed in the New York Times By Alex Kotlowitz | http://nyti.ms/UG2Sj1 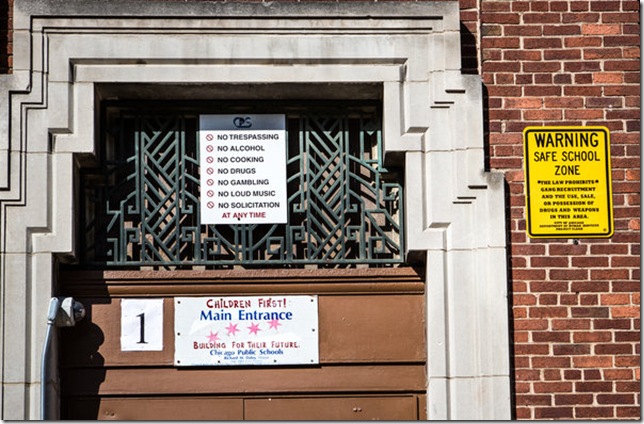 An entrance to the George Manierre Elementary School on the Near North Side in Chicago. Daniel Borris for The New York Times

September 16, 2012 :: THE CHICAGO TEACHERS’ STRIKE, which appears to be winding down, may be seminal, but for reasons that are not necessarily apparent. It came as a surprise. In July, the city had agreed to hire more teachers to accommodate a longer school day. Last Sunday, the city agreed to a substantial pay raise. The following day, teachers walked off their jobs for the first time since 1987. The union’s president, Karen Lewis, complained at a news conference about the lack of air-conditioning in schools and the new teacher evaluation system, which seemed rather flimsy reasons for some 26,000 teachers to abandon their posts.

Not only was the public confused, but so were the union’s members. One teacher told me last week that if you asked 30 of his colleagues why they were striking, you’d get 30 different answers. Their explanations varied: the teachers wanted respect, they opposed school reform, they feared the privatization of education (in the form of charter schools), they wanted to teach Mayor Rahm Emanuel a lesson. But I believe something else has been going on here, something much more profound.

“Reform of teacher tenure,” Paul Tough writes in a new book, “How Children Succeed,” has become “the central policy tool in our national effort to improve the lives of poor children.” Are we expecting too much of our teachers? Schools are clearly a critical piece — no, the critical piece — in any anti-poverty strategy, but they can’t go it alone. Nor can we do school reform on the cheap. In the absence of any bold effort to alleviate the pressures of poverty, in the absence of any bold investment in educating our children, is it fair to ask that the schools — and by default, the teachers — bear sole responsibility for closing the economic divide? This is a question asked not only in Chicago, but in virtually every urban school district around the country.

For the past few weeks, I’ve been spending time at Harper High, a neighborhood school in Englewood that started classes in mid-August. Over the past year, the school lost eight current and former students to violence; 19 others were wounded by gunfire. The school itself, though, is a safe haven. It’s as dedicated a group of administrators and faculty members as I’ve seen anywhere. They’ve transformed the school into a place where kids want to be. And yet each day I spend there I witness one heartbreaking scene after another. A girl who yells at one of the school’s social workers, “This is no way to live,” and then breaks down in tears. Because of problems at home, she’s had to move in with a friend’s family and there’s not enough food to go around. A young man, having witnessed a murder in his neighborhood over the summer, has retreated into a shell. Just within the last month, another girl has gotten into two altercations; the school is naturally asking, what’s going on at home?

The stories are all too familiar, and yet somehow we’ve come to believe that with really good teachers and longer school days and rigorous testing we can transform children’s lives. We’ve imagined teachers as lazy, excuse-making quasi-professionals — or, alternately, as lifesavers. But the truth, of course, is more complicated. Quality schools and quality teaching clearly can make a difference in children’s lives, sometimes a huge difference, but we too often attempt to impute to teachers impossible powers. (After more than 15 years of reform in Chicago, the dropout rate has been markedly reduced but is still an astonishing 40 percent.)

Consider that in Chicago, many elementary schools have a social worker just one or two days a week (they’re shared among schools) in communities where children face myriad pressures and stresses. Class sizes in kindergarten through third grade hover around 25, even though the Tennessee STAR study, conducted in the 1980s and renowned in education circles, found that small classes of about 15 during those early years can make a big difference for students’ long-term outcomes. In Chicago, slots in after-school programs for 6- to 12-year-olds have been reduced by 23 percent since 2005, according to Illinois Action for Children, an advocacy organization. Earlier this year, the city shuttered half its mental health clinics. A promising mentoring program, Becoming a Man, which was found by a University of Chicago study to have reduced violence and increased graduation rates among its participants, is oversubscribed. Forty-five schools want its services, but it has only enough money to work in 15. Last year, at an Aspen Institute conference, the education historian Diane Ravitch was asked her wish list to improve schools. At the top of her list: universal prenatal care — which, of course, has nothing to do with the classroom. Or so it would seem.

Of course, Ms. Ravitch wanted to make a point. As we slash services in deeply impoverished communities and reduce school budgets, how can we expect that good teachers alone can improve the lives of poor children? Poverty, of course, can’t be an excuse for lousy teaching. But neither can excellent teaching alone be a solution to poverty.

It’s been too easy to see this dispute as one between two hotheaded personalities — Mr. Emanuel and Ms. Lewis, or as a play for respect. Rather, as I spoke with teachers on the picket lines last week, it became clear that it was about something much more fundamental, and something worth our attention: top-notch teaching can’t by itself become our nation’s answer to a poverty rate that, as we learned the other day, remains stubbornly high: one of every five children in America live below the poverty level.

In Chicago, 87 percent of public school students come from low-income families — and as if to underscore the precarious nature of their lives, on the first day of the strike, the city announced locations where students could continue to receive free breakfast and lunch. We need to demand the highest performances from our teachers while we also grapple with the forces that bear down on the lives of their students, from families that have collapsed under the stress of unemployment to neighborhoods that have deteriorated because of violence and disinvestment. And we can do that both inside and outside the schools — but teachers can’t do it alone.