KOREAN STUDENTS, PARENTS DO THEIR PRE-COLLEGE HOMEWORK: An Ivy League school? Or one in the UC system? Thousands of people of Korean heritage swarm the 2012 College Fair in Irvine, hoping to find the right academic fit. 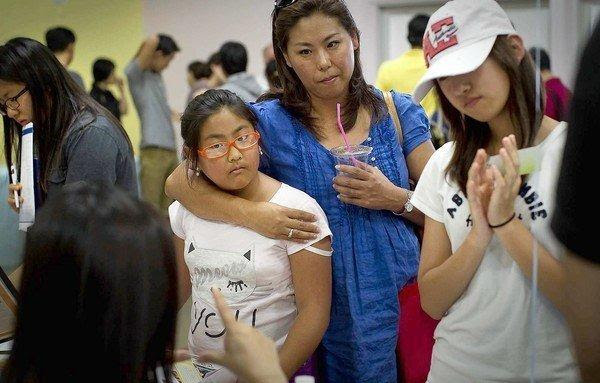 Irene Jeong, 10, left, of Los Angeles, her mother Susie and her friend Sarah Bong, 14, talk with a recruiter at the 2012 College Fair held on the campus of Bethel Korean Church in Irvine. (Gina Ferazzi, Los Angeles Times / September 15, 2012)

September 16, 2012, 9:42 p.m.  ::  He's only 11. Still, BJ Bae blended in with the thousands of people of Korean heritage who swarmed an Orange County college fair this weekend. He stopped to sign up for a concentration test so "I can know what job might be good for me."

Angela Kim, 10, headed straight for the Stanford University table, then UC Berkeley, then Columbia University. "We have lots of choices," she said confidently.

The mothers of both children tagged along, stuffing handbooks into their bags, promising to review them together when they get home.

"I'm just stunned by how early the parents are preparing their kids," said Jay Tsai, a recruiter for Yale University, as he surveyed the crowd at the 2012 College Fair in Irvine. The event, sponsored by the Korea Daily newspaper, drew more than 4,000 people — even in 100-degree heat.

Koreans and other Asians placing a premium on academic achievement and college preparation is not new. But to Tsai, the intense interest and the young age of some of those at the event seemed to signal something that is new.

"This tells me it's getting more competitive than ever before," he said.

Ed Johnson, a veteran admissions officer for the U.S. Military Academy at West Point, called it an "amazing gathering." He was eyeing students with top-notch SAT scores and "a motivation to serve," he said. "And, in fact, Korean families have so much motivation. They raise the standard."

Around him, participants were crossing off checklists, consulting a map of the event included in the Korean paper's 100-page guide and trying to figure out where to go. They fanned across the campus of Bethel Korean Church to chapel rooms, lecture halls and the gym, learning the nitty-gritty of financial planning and what's required by Ivy League schools as opposed to University of California campuses.

Private tutors and consultants tried to lure them with their services, including how to get college application essays exactly right.

"We give that extra push. Sometimes, kids have the grades already, but they're confused when they sit down to express their feelings," said Gina Kim, operations analyst for Flex College Prep, which has offices in Arcadia, Irvine and L.A.'s Koreatown. Buyers snapped up $10 copies of a guide written by her firm's chief executive: "Getting In: Insider Tips on College Admissions for Immigrant Families."

"A lot of Korean families want the brand-name school," Kim said. "We actually try to listen to the student's opinion. We want the student to thrive."

Students can join clubs devoted to subjects ranging from speech and debate to robotics and NASA — the kinds of extracurricular activities appealing to recruiters.

"We help Korean families find out what type of learner their child is," Seok said, "and from there we work with them to succeed."

Among those working the crowd was an overseas television crew taping a one-hour special on the fair, now in its seventh year. It's one of four such events in the nation.

"This is very important for Korean American society," said Jeongkie Kim, director of EBS America, an education channel. "While many people can be here, many more people can't be here, and parents from Korea aim to send their children to college in the U.S. That is the big goal."

In the cafeteria, Sukha Kim and his son, Ryan, ate $2 ramen sold by the Irvine Korean Parents Assn. "I want my son to have a broad knowledge of everything," said Kim, of Los Angeles. Ryan, a freshman at John Marshall High School near Griffith Park, said he does mental exercises between classes to refresh his memory. He also reads the New York Times, looking for words his doesn't fully understand. "I write it down on index cards to study," he said.

Outside, David Hong, a junior at Tesoro High in Mission Viejo, waited to meet celebrity guest Victor Kim, winner of "America's Best Dance Crew" on MTV. "It's hard to meet our parents' expectations," he said, "but I try my best." He has a 4.0 grade-point average and is tutored in biology, Spanish and pre-calculus. For college, he's leaning toward a chemistry major — or something in sports. "Not as a player," he said, "but analysis or commentary. My dad might like that better."

BJ Bae, the 11-year-old from Plaza Vista School in Irvine, said he handles homework on his own because his mother, Mina Yoon, is busy with her 3-year-old. "We came here to understand how college works," she said.

Michael Chen, visiting from Seoul, heard about it and made time to attend. His mission: Comparing music programs at Yale and Stanford. His daughter began playing the cello at age 5.

"Wherever she desires to go to school," he said, "we want to get her there."

Thanks for your grateful <a href="http://news.studentsarea.com”> education news </a> informations.

Nice and informative Blog regarding assignment writing service this is really helpful for people who interested in Online Education. Thanks and Keep Continue to share useful information with us.