Demand is up but funding is down for California's community colleges. Many students are shut out of needed classes, making it harder to get their degrees or transfer 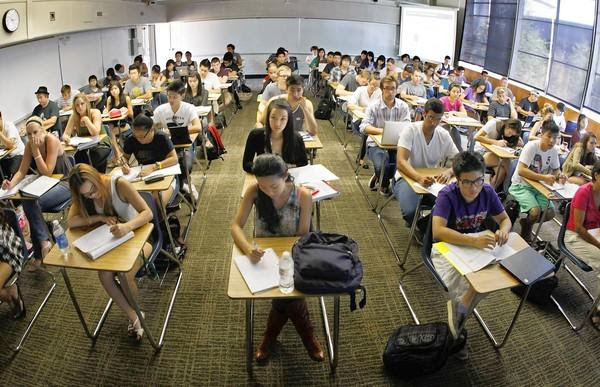 September 22, 2012, 8:20 p.m.  ::  Marianet Tirado returned to Los Angeles Trade Tech community college this fall, optimistic that she would get into the classes she needs to transfer to a four-year university.

Of the courses she wanted, only two had space left when she registered in May. She enrolled in those and "crashed" others. In one of those cases, she lucked out when the professor teaching a political science class admitted additional students. But she couldn't get into a biology class because she was too far down on the waiting list.

If the math and English courses she needs aren't offered next spring, she may have to push back her plans to apply to San Francisco State, UCLA or USC.

Her mother is puzzled that Tirado may spend three or four years at what is supposed to be a two-year college.

"Because that's what we think community college is," said Tirado, 24, a journalism major who lives in Watts. "It's hard to explain to my mom that I'm trying to go to school but the courses are not there."

This is the new reality for Tirado and about 2.4 million other students in the nation's largest community college system. The system is the workhorse of California's 1960 Master Plan for Higher Education, which promised affordability, quality and access to all.

In reality, the state's two-year colleges are buckling under the stress of funding cuts, increased demand and a weak record of student success.

The situation can be seen on all 112 campuses — students on long waiting lists, those who take years to graduate or transfer and others so frustrated that they drop out. Most of them enter ill-prepared for college-level work. Eighty-five percent need remedial English, 73% remedial math. Only about a third of remedial students transfer to a four-year school or graduate with a community college associate's degree.

"We're at the breaking point," said Jack Scott, who served as chancellor of the California Community College system for three years until retiring this month.

"It's like a nice-looking car you've been driving for several years: It looks shiny, but the engine is falling apart," said Eloy Ortiz Oakley, president of Long Beach City College. "The wheels fell off the Master Plan 20 or 30 years ago. We're finally feeling the results because we have enormous needs for our educational system to produce qualified workers, and we're playing catch-up now."

The consequences of not meeting those demands are huge: About 80% of firefighters and law enforcement officers and 70% of nurses embarked on their careers in community college. By some estimates, California will need 2.3 million more community college degree and certificate holders by 2025 to meet the demands of employers.

President Obama has described community colleges as a major engine of job growth and set a goal of graduating an additional 5 million students by 2020. But in California, home to a quarter of the nation's community college students, those efforts are hampered by the state's budget crisis.

The colleges also play a vital role in the state's higher education system, preparing students to transfer to University of California and California State University campuses. About half of all Cal State graduates began at community colleges.

California's community colleges started early in the 20th century as offshoots of high schools. Gradually they became separate junior colleges with a state-appointed Board of Governors.

The idea was to offer free classes to high school graduates, people looking for job training and those who just wanted to take a music, art or language class on a neighborhood campus.

Classes were free until 1984. At $46 per unit today, they remain among the least expensive in the nation. About 44% of all current community college students qualify for fee waivers based on income.

State funding has not kept pace with enrollment growth. Funding per full-time student has declined from a peak of $6,400 in 2000 to about $5,000 today. Course offerings have been slashed by almost a quarter since 2008, and enrollment has dropped by 485,000 students since then.

The community college system is divided among 72 districts run by locally elected boards of trustees, which control their own budgets and the hiring and firing of staff.

Four affluent districts — Marin, Mira Costa, South Orange County and San Mateo County — collect so much revenue from local property taxes and student fees that they don't qualify for most state aid. Still, with declining property taxes in recent years, they're not immune to cutbacks.

Many other college districts that depend on state aid are in more serious financial trouble. They have been forced to dig deeper into their reserves or borrow money. The 90,000-student City College of San Francisco appears to be in the worst situation and faces potential insolvency.

Campuses are cutting counseling and tutoring and dropping winter and summer sessions, trends that officials say could accelerate if voters reject a November ballot measure that would temporarily raise the state sales tax and the state income tax for high earners.

With a 3.6 GPA out of high school, Eduardo Vargas could have gone to a four-year university but chose East Los Angeles College because it was more affordable. During his first year, he was unable to register for any of the high-demand classes he needed for his business administration major.

This fall, he enrolled in honors classes — political science and statistics — because fewer students meet the requirements, so they're easier to get into. Even with an added speech class, he doesn't have the required 12 units to be considered full time.

"I look at the time frame it's going to take me to transfer to San Jose State and it's probably two more years," said Vargas, 19, of Monterey Park. "It's not that important anymore if I get a high-paying job. I just want to get my master's and be stable. Society needs an educated workforce, but it's going to have to invest more in education."

A study by the U.S. Census Bureau showed that, over the course of their careers, high school graduates earned an average of $25,900 per year compared with $33,000 for those with a community college degree and $45,400 for those with a bachelor's degree. (The figures are expressed in 1999 dollars.)

College leaders have begun to narrow the mission of two-year schools, focusing more on job training and preparing students to transfer.

To help move students more quickly through the system, the Legislature and Board of Governors recently approved measures that would set systemwide registration priorities, including preventing students from repeating courses to improve their grades and giving first choice to students who bolster their chances for success by participating in orientation and academic assessment programs. For the first time, students would have to maintain satisfactory grades to continue to qualify for fee waivers.

Keith Richardson, a 47-year-old former security guard, is trying to complete a degree in electrical construction and maintenance at L.A. Trade Tech. He hopes to graduate next spring so he can become a union electrician, but he's not sure he can get the classes he needs.

"I've got it all laid out and I just need a big break and the classes — and that's the hard part," Richardson said.

The vocational classes, taken by Richardson and more than 800,000 others statewide, are funded at the same level as other academic courses — even though they can cost twice as much to provide. Scott, the former chancellor, said these costlier classes should be funded at higher levels. Some campuses, he said, have even been reluctant to add technical or vocational classes because of the cost.

Last spring, Santa Monica College proposed a controversial two-tier tuition plan to allow students with means to pay higher fees for sought-after classes. Officials said those students would be able to move through the system more quickly, and the added revenue would help fund additional classes for everyone else. But the college abandoned the idea after Scott warned it could violate state education laws.

Ultimately, community colleges must consider bold steps, such as shifting resources from less populated regions of the state to areas with larger numbers of young people and combining some smaller districts, said Scott Lay, president of the Community College League of California, a nonprofit association of the state's community college districts.

"I think we're finally at the point where the majority of districts … have to realize that the landscape has changed," Lay said.

Tirado, meanwhile, took classes at both Trade Tech and East Los Angeles College last spring to fill out her schedule. This time around, she may need to find a biology class at another community college during the winter session — if she can find a campus still offering winter classes.

"Sometimes it's very discouraging to have to go through all of these obstacles to get an education," Tirado said. "But if we see it that way, we're not going to succeed."