SB 1458 broadens how the Academic Performance Index will be calculated. Test results will now account for just 60% of a high school's API score.

September 27, 2012, 12:56 a.m.  ::  California's key measure of public school quality will be redefined to lessen the impact of standardized test scores under a bill signed into law Wednesday by Gov. Jerry Brown.

The law, by Senate President Pro Tem Darrell Steinberg (D-Sacramento), will broaden how the Academic Performance Index is calculated by limiting test scores to 60% for high schools and including graduation rates and other factors.

The 1,000-point index, which is currently based entirely on student test scores, has been criticized as an inaccurate gauge of campus quality even as it is widely used by parents to choose schools and real estate agents to sell homes.

"For years, 'teaching to the test' has become more than a worn cliche because 100% of the API relied on bubble tests scores in limited subject areas," Steinberg said in a statement. "But life is not a bubble test and that system has failed our kids."

Test scores must count for at least 60% of the API for elementary and middle schools, where alternative data are less developed.

Under the new law, the state Board of Education will work with the state superintendent of public instruction to incorporate other factors into the index, such as student readiness for college and technical training. The law specifies an increased emphasis on science and social science, which carry little weight in the current API.

The bill, SB 1458, was supported by dozens of business, education and parent groups, including the Los Angeles Unified School District.

"I think the common theme among all of us is that test scores should never be the drivers of everything," said Sherry Griffith of the Assn. of California School Administrators, which took no position on the bill.

Brown vetoed another Steinberg bill, SB 1235, that would have required the state superintendent each year to compile a list of schools that suspend a high percentage of students. It also would have invited the districts to attend meetings to discuss the problem.

The bill was one of several proposed this year aimed at encouraging the use of alternatives to suspensions in an effort to keep more students in school. Steinberg noted that California recorded 750,000 suspensions in 2009-10, with a disproportionate effect on minority students.

Brown, who signed four bills last week that advocates said would help reduce suspensions, said he vetoed SB 1235 because the discipline issue was best left to "local school boards and the citizens who elect them."

All told, Brown signed 19 education-related bills and vetoed five. Among those he signed:

•SB 1290 by Sen. Elaine Alquist (D-Santa Clara), which gives school districts greater authority to close charter schools that fail to make sufficient academic progress. The Obama administration has withheld millions of dollars in federal aid until the state could demonstrate that it was making academic achievement the highest priority for renewing the publicly-funded charters.

•AB 960, by Sen. Michael Rubio (D-East Bakersfield), which bars California State University student fees from being established, adjusted or reallocated without the approval of student representatives. The new law explicitly bars CSU campus presidents from using alternative processes to impose or reallocate fees without student consent, as occurred at the Fresno, Northridge and Long Beach campuses, according to Rubio.

Brown also acted on a raft of animal-welfare measures Wednesday. They all take effect Jan. 1.

It will be illegal to use dogs to hunt bears and bobcats under one bill, which sprang from complaints that the practice is cruel and unsporting.

The Humane Society of the United States and a coalition of celebrities including Doris Day, Ellen DeGeneres and Bill Maher lobbied heavily for the ban. Many hunters opposed the measure, SB 1221 by state Sen. Ted Lieu (D-Torrance), saying it would infringe on their right to use a safe method of hunting.

Brown also signed a bill that prohibits landlords from requiring tenants to declaw their cats or cut vocal cords in their dogs. Landlords who violate the law could face a $1,000 fine under the measure, SB 1229 by Sen. Fran Pavley (D-Agoura Hills). 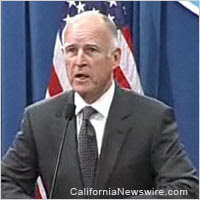 from the Governors Press Office |http://1.usa.gov/PsvPe9

9-26-2012 – SACRAMENTO  ::  Governor Edmund G. Brown Jr. today announced that he has signed the following bills to improve education in California:

• SB 1028 by Committee on Budget and Fiscal Review – Education finance.

The Governor also announced that he has vetoed the following bills:

For full text of the bills, visit: http://leginfo.ca.gov/bilinfo.html.