Friday 21 September 2012 ::  My friend Sophia Waugh – when she was President of the Los Angeles County Board of Education, insisted that we PTA types recognize Constitution Day – Sept 16 – this year the 225th anniversary of the ratification of the United States Constitution. She held events – lunches with rubber chicken and important keynote speakers …and mustered Student Body Presidents to recognize the holiday.

As holidays go, Constitution Day is third echelon. Certainly not Independence Day. Not even President’s Day – which honors George and Abe  …and Richard Nixon, Warren G. Harding and Millard Fillmore. Flag Day gets more respect.  You’d think in today’s day-and-age of patriotism+strict constructionism – with the tea partiers+FoxNewsers  wrapping themselves in the original intent - Constitution Day would be a bigger deal.

Life is never that easy.

The Bill of Rights gives us the right to bear arms and free speech and all the rest – but it also allows the disagreeable the right to  redress grievances. Sometimes the right to redress is unwanted …especially if one is, mixed-metaphorically, the emperor and/or empress with no clothes.

This A.M. I was invited by librarian* Andrea Garcia  to Constitution Day at Aldama Avenue Elementary School.

Ms. Garcia is new to that school, RIFed+relocated from another school which bought into the ®eform newthink that elementary schools don’t really need libraries or librarians – and if they do the work can be done by a kiosk or a volunteer.

When I signed in at the school’s front desk the administrative assistant bubbled over: “You will love what’s going on in the Library!  They should do this at every school!”

Next year I’m taking Sophia Waugh to Ms. Garcia’s Library. The kids were there, learning and paying attention and asking questions; fully engaged in their own education. We learned that there is a mechanism in the National Archives that lowers the actual Constitution into a nuclear weapon proof vault every night; how cool is that?  And that Jacob Shaillus, a clerk of the Pennsylvania General Assembly was paid $30. ($325.29 in today's money!) to actually inscribe the document.

My new mantra is that Young People are not The Future, they are The Present. We the People are alive and well – sitting on the floor and learning about the Constitution in Ms. Garcia’s library.

LATER I DROPPED BY BEAUDRY and visited the 29th Floor. Not because it is the home of Health and Health Education – or Beyond the Bell Programs – but because it is the top floor of the otherwise unremarkable building (“No floor is level”) Eli Broad sold to LAUSD  - affording the best view of the Last Flight of the Space Shuttle Endeavour. 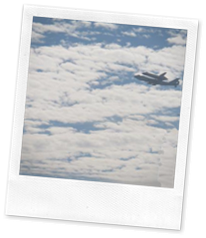 And the shuttle on it’s 747 transporter was indeed impressive – about as un-airworthy a contraption I have ever seen in flight …with the possible exception of a big black bumblebee the size of a Buick. The Endeavour is the last shuttle, the shuttles are the most complicated machines ever built by man. But do not doubt that kids in our schools today will build better, more complicated, vehicles that will travel farther.

As I was traveling down in the elevator I found myself with a young woman.

“Yes,” I confessed, being guilty and all.

“Is it true you are running for the board? Against Monica Garcia?”

And I will. My job is to make sure Monica doesn’t have too much fun.

A few minutes later as I started to open the door of my car, parked on the street, I saw a guy I know to be a press photographer, standing outside his car - taking a picture of something up in the sky. “I was just driving and I saw it up there again,” he said.

It was Endeavour, back again for one last flyover,  headed for LAX.

* Officially (but not in these pages) the “Library Aide.”