LAUSD Strikes a Deal with Administrators on Teacher Evaluations

9/11/2012 09:35:42 PM PDT  |  Los Angeles Unified Superintendent John Deasy announced Tuesday that the district has reached a deal with its administrators union over the use of student achievement and other data in performance evaluations.

The district is under a court-ordered Dec. 4 deadline to reach agreement with leaders of its administrators and teachers unions on a new performance evaluation that uses student test scores to help gauge the success of its educators. The deadline was set by the judge in the Doe vs. Deasy lawsuit, which was filed by a parent advocacy group seeking to overhaul the district's evaluation system.

Judith Perez, president of Associated Administrators of Los Angeles, said the one-year memorandum of understanding reached Tuesday satisfies the requirements of the court order while giving the union time to devise a new process for evaluating principals and assistant principals.

According to the district, administrators' evaluations will be based, in part, on Academic Growth over Time and standardized test scores at school, grade and departmental levels. The agreement also calls for using data such as attendance and graduation rates, and enrollment and passage rates in college-prep classes.

"This is a remarkable breakthrough," Deasy told the board at the start of its afternoon session. "This will show we can provide an evaluation that points to what good leadership is, helps principals get good and demonstrates accountabilities for leadership."

Perez said the pact does not require the ratification of the membership. The school board is expected to approve the deal at its next meeting.

Deasy's announcement prompted board member Steve Zimmer to seek a delay in his resolution to replace AGT measurement in teacher evaluations with a slate of other assessments.

Los Angeles Unified is using AGT in a no-stakes evaluation experiment involving one teacher at each of its 800-plus schools, and the administration wants to expand it districtwide.

However, United Teachers Los Angeles maintains that AGT is too volatile to use on the classroom level since it relies on the scores of only a few dozen students. Instead, the union - and Zimmer - want the school's average AGT, as well as other assessments, to be used in evaluations.

Zimmer said he stood by his resolution, but he didn't want it to interfere with the ongoing negotiations with Los Angeles Unified. The district reported last week that it was close to a deal with AALA, but he said nothing about any progress made with the teachers union.

"Getting it right for kids and teachers is more important than any agenda," he said. "The process is to grow and improve. That should be our only agenda."

UTLA President Warren Fletcher said he hopes to meet with AALA leadership to discuss its tentative deal with the district, but he noted that any use of the AGT for principals would be at the schoolwide level.

The one-year agreement allows the use of student achievement as one way of judging administrators. 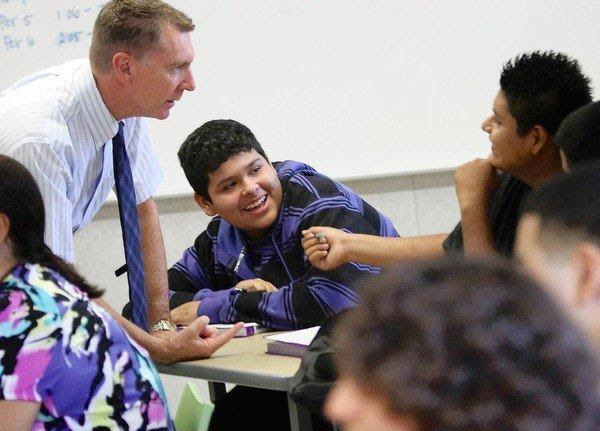 September 11, 2012, 11:34 p.m.  ::  For the first time, Los Angeles public school principals will be evaluated under a new system that includes student achievement as one measure of administrators' effectiveness.

The pact, which covers Los Angeles Unified's 1,500 principals and assistant principals, is aimed at meeting a Dec. 4 court-ordered deadline to begin using student achievement data to assess administrators and teachers.

The district is continuing to negotiate with the teachers union, which so far has vehemently rejected the use of test scores in instructors' performance reviews. The union has said that standardized tests are too unreliable for high-stakes personnel decisions, including firing and promoting teachers.

Disagreement over a new evaluation system in Chicago was one flash point that led more than 26,000 teachers to walk off their jobs this week.

Judith Perez, president of the 2,300-member Associated Administrators of Los Angeles, was measured in her reaction, saying that although she was pleased with the agreement, its ultimate result "remains to be seen."

The one-year time period, she said, will give both sides time to work out details of the system while complying with the court order, which was issued in June by Los Angeles County Superior Court Judge James C. Chalfant. Chalfant ruled that a 41-year-old state law, known as the Stull Act, requires evaluations to include evidence of how well educators help students learn state and district academic standards as determined in part by test scores.

Under the agreement, measures of student performance could include the California standardized tests, district assessments, Advanced Placement course enrollment and passing rates, class grades and other indicators, Perez said.

L.A. Unified's system that charts students' academic achievement using three years of test scores, known as Academic Growth over Time, has been the most controversial.

The agreement does not specify how much the student achievement data should count in the evaluations, saying it will be "limited" and not the "sole, or primary, or controlling factor."

Other data that could be used to evaluate an administrator's performance include attendance, graduation, dropout and suspension rates and how rapidly students are learning English.

"We believe this will give a broad picture of the school and help administrators as school leaders in working with teachers," Perez said.

She added that a critical factor in making the program work will be districtwide training of administrators in interpreting and using the data in evaluations. Administrators will also need guidance on how to improve their performance, she said.

L.A. Unified has a voluntary evaluation program underway in 100 schools, a program that Deasy wants to expand districtwide. But school board member Steve Zimmer objected to the system because it uses student test scores as the sole way to determine students' progress. He had proposed that other measures, including tests developed by teachers, also should be used.

The board had been expected to discuss Zimmer's proposal Tuesday but he decided to delay the debate. Zimmer said other measures would be "a better and fairer" approach.

Board member Tamar Galatzan said the district has already spent two years developing and testing its system and that the time to object "is long past." 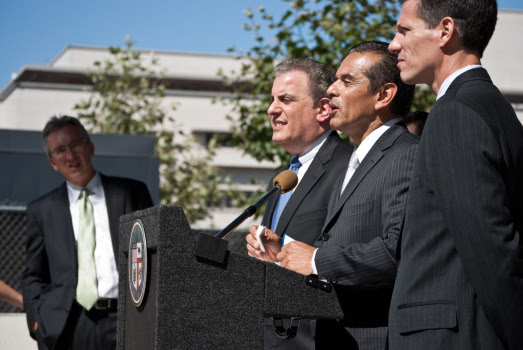 Andres Aguila/KPCC | Attorney Scott Witlin, Mayor Antonio Villaraigosa and EdVoice president Bill Lucia (left to right) talk to the media about the decision in the case of Doe v. Deasy on June 12, 2012. The judge ruled LAUSD must include student performance data as part of its evaluation of teachers and school administrators.

9/11/2011  ::  L.A. Unified and the Associated Administrators of Los Angeles announced Tuesday that they have reached a tentative one-year agreement that incorporates student test data as a factor in evaluating principals and assistant principals.

The deal, which would apply to evaluations this school year, brings the district one step closer to fully complying with state law as ordered by a judge in July; L.A. Unified is still in discussions with the teachers' union and must reach an agreement by Dec. 4.

The agreement requires an approval vote by the school board, said LAUSD spokesman Thomas Waldman. The board will vote on the agreement in early October, he said.

Principals and assistant principals will be evaluated with a variety of student data including school-wide, grade-level and departmental test data. Factors such as attendance, enrollment and graduation rates will be included.

"The purpose of this one-year MOU [memorandum of agreement] is to comply with the judge's order in Doe vs. Deasy," Perez said. "It gives us the time to now really negotiate the evaluation system [and] to really figure out what to do in the long run."

The union will meet with the district later this month to begin negotiations on a long-term evaluation system that includes student test data, Perez said.

"I'm grateful to AALA for working with us to achieve this breakthrough, which we believe will greatly help improve the quality of education in every school," Deasy said in a statement.

As part of the agreement, the district will provide training and guidance on how to use such data for all administrators starting in October, Perez said. She said training may be online or face to face, but will try to limit the time that principals are away from campus.