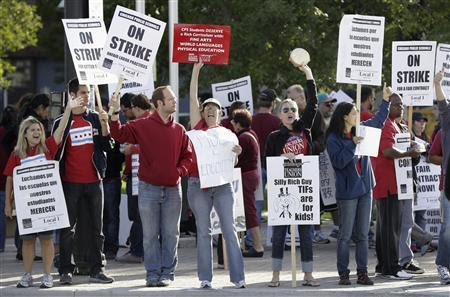 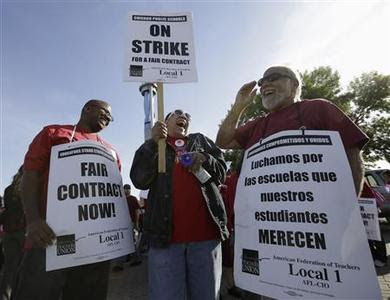 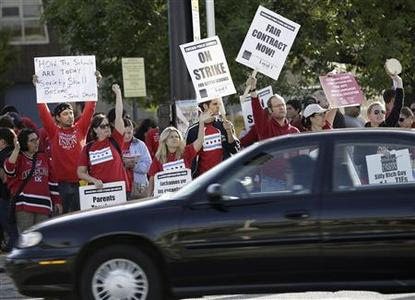 CHICAGO | Fri Sep 14, 2012 7:21pm EDT - (Reuters)  ::  A week-long confrontation between Chicago public school teachers and Mayor Rahm Emanuel moved toward resolution on Friday as the two sides reached a tentative agreement that could end a five-day strike and clear the way for classes to resume on Monday in the third-largest U.S. school district.

More than 350,000 Chicago students have been out of school since the beginning of the week after some 29,000 Chicago teachers and support staff walked off the job over Emanuel's education reforms.

Negotiators announced that they had reached an agreement in principle on all issues. Talks were set to continue through the weekend to put the tentative accord into legal language so core teachers union activists could see it on Sunday, they said.

Details of the tentative agreement were not immediately released, but it was clear that Emanuel had retreated on his teacher evaluation demands, agreeing to phase in the new standards and reduce the importance of standardized tests.

"What we want is ... by Sunday, get all the language worked out so we have something to give to our delegates for them to make a decision in whether to suspend the strike or not," Chicago Teachers Union President Karen Lewis told reporters.

Both sides said they hope the deal will allow students to go back to school on Monday.

"This tentative framework is an honest and principled compromise that is about who we all work for: our students," Mayor Emanuel said in a statement. "It preserves more time for learning in the classroom, provides more support (for) teachers to excel at their craft, and gives principals the latitude and responsibility to build an environment in which our children can succeed."

The teachers walked out after talks broke down on Sunday, staging their first schools strike since 1987. It was the largest strike in the United States in a year and has galvanized the labor movement and exposed a rift within the Democratic Party over reforms of urban schools.

Parents of kindergarten, elementary and high school students were forced to find alternative child care, keep their children at home or take them to nearly 150 centers around Chicago set up by the city to provide breakfast, lunch and supervision.

Striking teachers continued picketing around schools staffed by principals and volunteers on Friday. More than 80 percent of Chicago public school students qualify for free school lunches because they come from low-income families. Crime and gang violence plague many neighborhoods on the city's poorer south and west sides.

Extracurricular activities such as high school sports and the arts also have been suspended.

The teachers' strike is unusual in the United States where unions have been severely weakened by state and local laws constraining their power, and union membership has fallen in a service economy. There were only 19 strikes of 1,000 workers or more in all of 2011, according to government figures.

Teachers revolted when Emanuel, with support from a national school reform movement largely financed by wealthy philanthropists, tried to pin much of teacher evaluations to students' performance on standardized tests in areas such as reading and math.

The union argues that the policy forces them to teach to the test and narrows the curriculum. Chicago teachers also said they should not be evaluated on factors outside their control such as poverty and crime, which many of their students endure.

Lewis, the fiery former high school chemistry teacher who leads the union, shrewdly built support among parents and teachers in Chicago's inner-city communities for two years before calling the strike. The community organizing resulted in strong backing for the strike as well as enthusiastic rallies.

The deal also is expected to be costly for Emanuel and the school district, which is facing a financial crisis.

The school district has offered average wage increases of 16 percent over four years, plus some benefit improvements. It is not clear how Emanuel will pay for those since the district faces a $665 million budget deficit this year, has drained financial reserves and levied property taxes to the legal limit.

The high-profile labor clash in Obama's home city has been awkward for the president. Emanuel is Obama's former top White House aide and a key fundraiser for the president's re-election campaign. Unions are a major constituency of the Democratic Party and will be important in getting out the vote on November 6.