The vote, which took place Thursday and Friday, means that already swollen class sizes will not increase next year and the majority of teachers, nurses, librarians and magnet school coordinators -- who run popular special programs -- will keep their jobs.

The final tally had 20,429 union members voting in favor of the agreement and 4,127 against, a favorable plurality of 83.2%. About 40,000 members of United Teachers Los Angeles were eligible to vote, including guidance counselors and psychologists.

The one-year pact calls for four unpaid furlough days, a number that could shrink or rise depending on the state budget. At this point, state budget projections, though improving, predict shortfalls that make the furloughs likely.

A furlough is an unpaid day off. A teacher furlough day could fall on a planning day or a paid holiday -- or on a school day. Furloughs caused the academic year for students to shrink both this year and last year in the Los Angeles Unified School District and elsewhere in California.

The four furlough days would translate to a pay cut of about 2%; teachers accepted a deeper temporary pay cut -- a result of seven furlough days -- in the current school year.

Although more than 5,000 jobs will be spared, union officials said they still anticipated hundreds of layoffs. These job losses are due to declining enrollment, the expiration of federal economic stimulus funds and the district’s decision to turn over some campuses to independently-run charter schools, which aren’t obligated to use district employees.

The pact does not restore class sizes to pre-recession levels. Classes in kindergarten through third grade will be staffed at a ratio of 24 students per teacher, an increase from the previous 20-1 ratio in those early grades.

The Board of Education is expected to approve the agreement June 14.

"We now need to find long-term solutions to the budget crisis so that the classroom is not continuously threatened."

The board of the LAUSD will vote on the deal on June 14.

"While this agreement does not restore all the (job) cuts -- because our schools are still drastically underfunded -- it goes a long way toward providing the resources and personnel for our students to succeed," LAUSD Superintendent John Deasy said in a statement on May 27, the day negotiators agreed on the draft contract.

Eby said the contract would have the effect of initially saving 3,400 jobs and ultimately more than 5,000 in the 2011-12 school year, with most of the more than 5,000 layoff notices previously sent by the district now expected to be rescinded. Additionally, class sizes will be maintained.

The teachers will have to take four mandatory furlough days during the period governed by the contract, not 12, as originally demanded by the LAUSD. 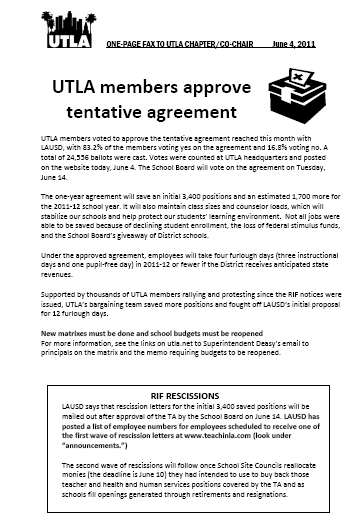