A SPEECH FROM ARNE DUNCAN WE’D LIKE TO HEAR

by John Merrow  from the LEARNING Matters blog | http://bit.ly/kGDlWR 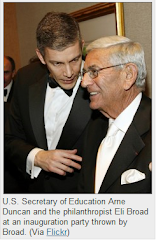 With my basketball playing limited recently because of my schedule and a nagging injury, I have been thinking about the sport and its similarities to education. That’s what I want to talk about today.

Some of you may know that I am comfortable on the court. I played a lot as a kid, was team co-captain at Harvard and then competed in an Australian pro league. I still play regularly and have been on the team that has won three national Three on Three titles in the past few years.

I know something about education too — maybe even more than my critics would have you believe. I grew up in my mom’s early childhood program, and I was CEO of CPS (Chicago Public Schools) for seven years.

What I have come to realize is that we are focusing too much on test scores — to the detriment of real learning. That’s like a basketball coach paying attention only to wins and losses while neglecting the fundamentals of the game.

Here’s what I mean. In basketball you compete to win, of course, but you play and practice a heck of a lot more than you actually compete in games against other teams. And that’s what should happen in school, if you think of big high-stakes tests as those competitive games.

In both, of course the scores matter, because winning is better than losing, but think about how you get those good scores in basketball. It’s not by practicing ‘winning.’ No, it’s by working on the elements that make up the game: passing, foul shots, jump shots, rebounding, diving for loose balls, defending, and so on.

When teachers devote a lot of time to practicing test taking, they are going down the wrong path. That’s like trying to practice ‘winning’ when they should be working on the essentials of the subject, the elements of ‘victory.’ Teachers should be helping with the academic equivalent of rebounding, passing, defending and so on. If you’re an English teacher, your students should be reading, writing, rewriting and arguing their points, and so on. As E. D. Hirsch, Jr. has noted, “If we want our children to do well on reading tests, they should be reading — not practicing taking reading tests.”

Friends who have been around Washington longer than I point out that, ever since No Child Left Behind, we have gotten away from the essentials of learning and focused instead on high stakes tests. We used to give high stakes tests just three times — in 4th, 8th and 12th grades — but now, because of NCLB, schools are required give them every year. In my basketball analogy, that’s like sending teams out to play in tournaments all the time, without giving them time to get game-ready.

Want an example? Take Connecticut, which had invested a fair amount of money to develop some pretty good (largely non-bubble) tests that were going to be given every other year, until the previous administration made it stop, effectively saying, ‘Test every year or lose your federal dollars.’ Connecticut fought back but lost the battle. Washington forced it to throw out its much better tests and replace them with cheap, off-the-shelf bubble tests.

And so, from now on, our policy will be to encourage more of the basketball equivalent of practicing the elements of excellence. I urge teachers to translate ‘rebounding, passing, defending, foul shots, three pointers, et cetera’ into their academic counterparts in their particular subjects, and concentrate their efforts there. When a coach does that, winning takes care of itself. If we do that in our classrooms, winning — doing well on accepted measures — will also take care of itself.

The Department will do its part by granting waivers from some of No Child Left Behind’s rules, to states that apply and qualify. But it’s up to ordinary Americans to get involved, to help figure out what we want for our children.

This blog is written by John Merrow, veteran education reporter for PBS, NPR, and dozens of national publications. He is President of Learning Matters, a 501(c)(3) media production company based in New York and focused on education. His February 2011 book, The Influence of Teachers, is published by LM Books.