A Month In New Job, Chicago Mayor Emanuel Is Having An Impact 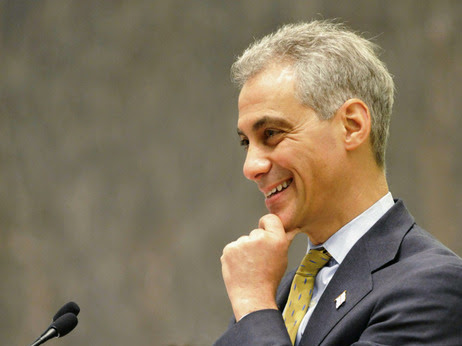 June 17, 2011 -08:25 pm - Chicago officials be forewarned: Mayor Rahm Emanuel, the city's new chief executive, may drop in on you with no notice and administer a snap quiz.

In a conversation with Weekend Edition Saturday, Emanuel told host Scott Simon that he did just that recently.

Between two scheduled events, Emanuel decided to make an impromptu visit to a police precinct in a high crime area which was just assigned 57 additional extra police officers as part of the new mayor's effort to get more police out of desk jobs and onto the streets.

"He came down and I said ... 'Tell me what your plan is?' " for deploying the additional officers, Emanuel said.

We don't learn the commander's response, probably a good thing since why should police give away their game plan to gang members and other criminals?

Emanuel related the story as an example of how as mayor, a job he's been in for a month, he can have an immediate, hands-on impact on real-world problems in ways that he couldn't as chief of staff in President Obama's White House.

After that anecdote, certain Chicago police commanders might wish Emanuel had stayed in his prior position, of course, given the story of his visit to the precinct.

But they may be dealing with him for some time. He sounds like he's enjoying his new job at least much as he thought he would. And he's keeping up his fitness. He told Scott that when he and the president check in with each other these days, one thing they do is compare their strict exercise regimens.

From surging police into Chicago's high-crime neighborhoods to working to increase the classroom time for the city's public-school students to dealing with the larger municipal deficit, Emanuel is trying to shake up a city bureaucracy that clearly grew complacent under his predecessor.

Richard M. Daley held the mayor's office for 22 years, the longest tenure of any Chicago mayor. Emanuel doesn't say it, but you get a sense from the interview that maybe that was a little too long.

Take what he found in the city's public schools. He described the situation that existed under his predecessor who happens to also be a friend.

"Over the years there was an implicit understanding. The elected officials, politicians got labor peace. The teacher' union negotiated constant regular pay increases. And Johnny and Susie got left on the side of the road. They didn't get any more instructional time.

"I said (to teachers) 'You're going to get a pay raise,' but ... I'm happy that the governor signed into law on Monday the ability for us to finally get a length of day and a length of year that makes the kids' education competitive with the rest of the country and also with the kids in Hong Kong, with the kids in Singapore, with the kids in London. And Berlin. That's how you compete to win and seize the future."

So Emanuel's arrival has meant, so far, longer school days (he instigated that) and probably more anxious police officials. Sounds like he's having an impact.

Much of what Emanuel told Scott was what you would expect: he's going to make sure big contracts, like who gets to run the major concessions at O'Hare airport's international terminal, will be in the best interest of Chicago's citizens; he's fortunate to have had such great jobs — working for presidents Bill Clinton and Obama, being a congressman and now mayor of the nation's "greatest" city.

He also talked a lot about sending out Eli's cheesecakes, threatening even to send one to his interviewer.

And Emanuel made a promise that probably came out a little differently than he intended it.

"I'm going to keep telling the truth until it stops working for me."

Again, he probably didn't mean it to sound like he'll stop telling the truth if his poll numbers drop.

He more likely meant he plans to level with Chicagoans and to hold city officials accountable, himself included.

After 30 days in office he gave himself an incomplete which makes sense. It was only a month into the reign of Rahm.

That's a thought that some police commanders and Chicago school children may not find at all pleasing.

Mayor Rahm Emanuel's handpicked Chicago Public Schools board drew a battle line between the new administration and the teachers union with its first official act when it voted Wednesday to rescind the 4 percent annual raise due to teachers and other school union members.

The board's unanimous vote, allowed under a provision of the contract that is set to expire in 2012, saves an estimated $100 million as the city's public schools confront a deficit now pegged at $712 million for the coming year.

But Chicago Teachers Union President Karen Lewis said the union would seek to negotiate the decision to stop the raises from going into effect. If that fails, union leaders could reopen the entire contract — a move that could allow the district to fast-track plans for a longer school day and year for city schoolchildren.

"We are very shocked that the board would take an action that could possibly lead to a strike," Lewis said. "This is going to be a very, very challenging summer."

Emanuel wasted no time in lauding the action, saying in a statement that he appreciated the board's "vigilance in minimizing cuts to our children's classrooms and their commitment to ensuring the public schools are accountable to Chicago's taxpayers."

But union officials and many rank-and-file teachers contend the vote signaled a lack of respect for their work, even though three-quarters of them will still receive some sort of pay increase next year.

It was the opening salvo in what could shape up to be an acrimonious battle between Emanuel's administration and organized labor.

Faced with major money problems at City Hall, CPS, the Chicago Transit Authority and elsewhere, Emanuel is expected to squeeze unions across city government in an effort to cut costs. Employee salary and benefits represent the bulk of the budget at city agencies.

During the mayoral campaign, Emanuel told city residents to brace themselves for shared sacrifice. He got elected with scant union support, making organized labor an easier political target.

Lewis said CTU and other school union officials spent Wednesday afternoon hammering out a plan to mobilize the teachers, cafeteria workers, engineers and other workers who report to schools every day. Beyond the Chicago Teachers Union, the board's decision affects members of the Service Employees International Union, International Union of Operating Engineers and International Brotherhood of Electrical Workers.

CPS confronted a similar situation in 1991 when the district superintendent opened contract negotiations. Last-minute, late-night talks resulted in a 3 percent raise for teachers, rather than the 7 percent hike promised in the contract.

Wednesday's vote came during the first meeting of the new slate of Chicago Board of Education members, schools chief Jean-Claude Brizard and his education team. The new leaders spent little time on formalities, instead delving into the financial quagmire facing the city school system.

District leaders said removing the raises does not forestall the possibility of layoffs.

"There can be no guarantees," said Board President David Vitale. "There's still $600 million to find."

Brizard indicated the budgetary belt-tightening will not increase class sizes, saying "we know the relationship between a student and teacher is at the heart of a student's academic experience."

Later, Vitale said the district plans to implement "in some form" an extended day program in the coming school year, an idea embraced by Emanuel. A new state law signed this week allows Chicago school officials to lengthen the school day and year, but the union may bargain for more pay or benefits if additional minutes are added.

Before voting on rescinding the raises, the newly seated board members questioned exactly what taking them away could mean for rank-and-file teachers. The current contract rewards educators based primarily on their years of experience in the classroom and their education level, typically called step and lane changes.

"I want to know if the 4 percent increase is not approved, would there still be step increases and lane increases?" said board member Mahalia Hines, who worked as a CPS principal and teacher for more than three decades.

Such adjustments are not affected by the overall 4 percent increase, said Alicia Winckler, the district's chief of human capital.

In fact, three-quarters of district teachers would still receive a raise next year. An estimated 74 percent would receive an increase rewarding them for their years of service, while another 1 percent would get a pay bump for earning an advanced degree.

The average Chicago teacher's salary is about $69,000.