CORPORATE GLOBALIZATION: With the changes in the economy, corporations have turned to the service sector to make profits.

by The Trinational Coalition to Defend Public Education | http://www.trinational-usa.org | http://bit.ly/lK5eoD

We know that American students, especially from low-income communities, lag behind students in other countries. Some politicians and media people accuse students of being lazy and disrespectful...or accuse teachers of not working hard enough.

Since 1978's Proposition 13 passed, schools and social services have been starved of funds -- today we spend less money per student than 20 years ago. No wonder schools and colleges are so crowded and under-supplied. But instead of getting back our schools' funding, some millionaires and even billionaires want tax money for their charter schools and for-profit colleges, saying that the methods that made them rich will now help our students.

The Trinational Coalition to Defend Public Education exists to make people aware of what these slick operators are doing in the United States, Mexico and Canada. We offer this small brochure to help you defend your school or college, and find others doing the same thing.

Schools and colleges in wealthy areas get more money. It's that simple. And it's the first thing we have to look at to understand the problems in education today.

The private companies and the politicians who look out for them keep telling us not to worry about what rich people are doing, we've got to just focus on helping our own kids, now. But what if it's our own tax money that helps make wealthier people's schools better? It may be hard to believe, but it's true. How does this happen? Public school students are supposed to get the same amount of funding per student... but they don't. Let's take a look...

It's true that there has been a struggle to make the per-kid budget of every kid the same. California was once taking steps to see that every child's school got an equal share of education taxes. In 1971's Serrano decision, the state Supreme Court ruled that kids in school districts with higher property values did not deserve to have their public schools funded better than those which poor kids attended. Taxes from rich and poor areas were supposed to go to the State, which would fund schools fairly and equally. But today, rich areas like Beverly Hills have been allowed to raise their own property "parcel taxes", which provide their local schools with more money than poor schools can.

What barely gets looked at is how some of the people who claim to be education reformers have supported the decline of tax money that schools need.

Charter schools are publicly funded schools that receive permission to operate for a specific period of time, usually 5 years. After this time period, the charter must be renewed. Charters may be non-profit (somewhat of a misnomer) or for-profit. Twenty-five percent of charters across the United States are for-profit corporations.

The idea of creating charters began in the early 1990's & they were intended as schools that would be free of certain bureaucratic restrictions placed on regular public schools. In practice, the most beneficial changes have always been possible within public schools, including those with union contracts.

How has the charter movement changed?

Not long after the charter schools were established, the profit motive quickly began perverting their purpose.

The original proponents of the charter school concept began to speak out against charter schools because they saw how they were being turned into money-making businesses.

What are some of the problems with charter schools?

Although originally intended to be representative of their neighboring communities, charters now routinely cherry-pick their students by first attracting those more highly-motivated who are willing and able to go through the application process. In addition, students whose parents are not able to donate the required "volunteer hours" are frequently excluded.

There is mounting evidence that special education students and English language learners are often discouraged from submitting applications for enrollment in charters. Special education programs may be missing or inadequate.

Students who perform poorly academically or are behavior problems are often removed from the charter schools and sent back to the neighborhood public schools.

Charter schools make exaggerated claims of their elevated scores on state tests, proven to be unreliable indicators of achievement. With so much time spent on preparing for tests, learning suffers. For-profit charter schools are businesses. Their administrations are not required to have educational expertise, and they are not accountable to the students or parents.

Why are charter schools getting so much attention from the private sector?

They hold the promise of large profits, high salaries, union busting, and cronyism with the big developers, resulting in the transfer of public funds into private hands.

What is the cause of the problems in public education?

What can be done to address the problems in public education? 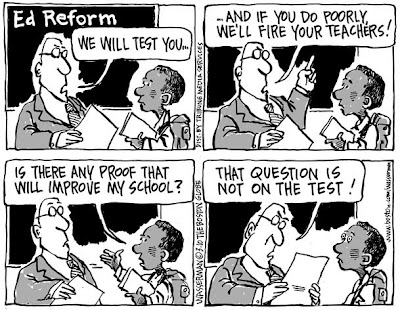 As the world moves into the age of robotic factories and the Internet, a good education is not only a part of each family's progress, but also is vital for the wellbeing of every city, state and country. California set up the 1960 Master Plan for Higher Education to help keep its economy healthy through a system of public colleges and universities offering quality, affordable education. Much of the state's leadership in electronics, aviation, media and the arts grew out of this Plan.

But now the richest corporations and individuals are turning California's successes against it. Computer technology developed here is used to shift companies overseas, abandoning the workers who helped build them up. Graduates of the state's public institutions are hired and told to develop new plans to reduce corporate taxes, resulting in shrunken higher education budgets and cuts in the wages and pensions of educators. Profits created in California are funneled into the campaigns of anti-California politicians nationwide, turning Congress into a base of attack on public education. More people are seeing that they must organize a movement to defend public education.

Between 1973 & 2008, the percentage of the state's budget going to the community colleges, Cal State campuses, and University of California has fallen from 18% to 11% -- that means a loss of about $3 billion.

Newly elected Governor Jerry Brown has proposed cutting $1.4 billion more this year, canceling plans to restore the 40,000 student places eliminated from the 23 CSU campuses in the previous cuts, and the same is expected of the CC and UC systems. CSU student fees have doubled since 2000. The new budget cuts threatens to result in more increases, which many students of all colors will have trouble paying.

Especially hard hit will be thousands of undocumented college students, who are not eligible to receive government financial aid because Congress refused to pass the Dream Act. Many will be forced out of higher education By raising admission standards and fees at the same time, administrators make it appear that the declining enrollment is due to poor student performance.

The Regents and Trustees of the UC's and CSU's are dominated by business leaders who may have a personal stake in turning students to for-profit schools. For instance, while serving as a UC Regent, Richard Blum's company invested over $900 million in Career Education Corporation and ITT Educational Services, two of the nation's largest for-profit universities, which compete with public universities like U.C.!

As fees and grade requirements keep rising, thousands of low-income students turn to for-profit colleges so they can work full-time while taking weekend and online classes. Companies like the University of Phoenix and DeVry actively recruit the very students that UC and CSU have turned their backs on, encouraging students to apply for government financial aid that pays their high fees. In 2009, the five biggest users of federal Pell grants for low-income students were all for-profit companies, collecting over $1 billion "50 percent higher than two years ago", and in addition to grants, "They collected about $7 billion in subsidized Stafford loans in 2008-2009, up from $4.7 billion two years before" (AP Impact, 4-29-10).

However, despite gorging themselves on all these billions of taxpayer money guzzling, for-profit schools do a poor job - their graduation rates lag far below the average for public universities, and their dropout rates are far higher.

Only 36% of the students at for-profit schools repay their government loans, while "at public state colleges and universities, the rate was 54%" (Los Angeles Times August 16, 2010). For the students who drop out and can't pay their loans, their finances can be ruined for a lifetime - Congress has changed the law so that students can no longer end financial aid debts through bankruptcy, like corporations can. But when the for-profits lose a student because of their poor services, they pocket the financial aid, then just go out and get a new victim.

A new scheme of "partial privatization" has been proposed from inside the University of California. On September 9, 2010 the Los Angeles Times reported that UCLA's Anderson School of Management wants to give their campus back their public funding by 2015, "and to replace that $5.6 million a year with additional private donations", and to raise its student fees "from $41,000 now to about $53,000". This would in effect create a corporate-funded island within UCLA, free from many of the rules affecting the other departments. UC Berkeley's Law School has admitted to exploring a similar private/public arrangement.

With the changes in the economy, corporations have turned to the service sector to make profits. Not just here, but all over the world. This is what is known as corporate globalization.

The corporate takeover of education and other public services began decades ago.

Public education is the foundation of democracy.

What is the problem with privatization?