FOR SAN DIEGO SCHOOLS, A FEAR THAT LARGER CLASSES WILL HINDER LEARNING 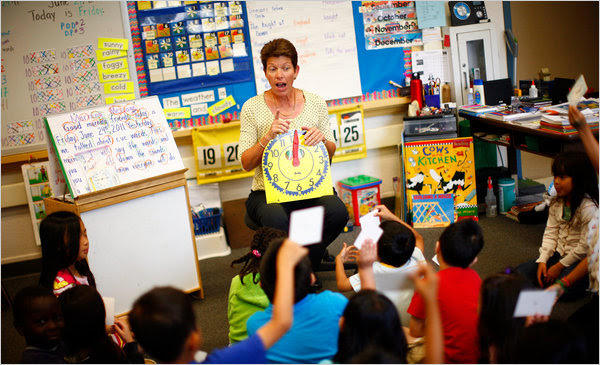 Eric Thayer for The New York Times - Cindy Robinson teaching her kindergarten students how to tell time at Central Elementary in San Diego. Her class size could soon jump to 30 from 17.

June 26, 2011  - SAN DIEGO — Many in the forefront of what is called the education reform movement — like Bill Gates, the philanthropist, and Arne Duncan, the nation’s education secretary — have attended private schools with small class sizes. Others, like New York’s mayor, Michael R. Bloomberg, and its former schools chancellor Joel I. Klein have sent their children to private schools with small class sizes.

Imagine if the poorest public school children had the same opportunity. That is what has been happening for several years in this urban district of 130,000 students. Using state money and federal stimulus dollars, San Diego has held class size to 17 in kindergarten through second grade at its 30 poorest schools.

“Small class size is the most important priority for us,” said Richard Barrera, the school board president. “These children are behind when they enter kindergarten. If they’re on grade level by third grade, most will be fine.”

Mr. Barrera believes that the rise in the district’s state test scores — to 56 percent proficient in English from 45 percent three years ago — is due, in part, to smaller classes.

However, in San Diego, 17 could soon become 30. Federal stimulus money has been spent. California’s governor and Legislature, after several years of budget cuts, are deadlocked over whether to cut again. All around the state, districts have developed worst-case budget plans.

At Central Elementary here, where 100 percent of the children are poor enough to qualify for free lunch and 85 percent learn English as their second language, increasing class size to 30 children would mean cutting the teaching staff to 23 from 38.

“We’re waiting to see if the state pushes us over the cliff,” said Cindy Marten, the principal.

While educators debate whether the academic gain from reducing class size is worth the cost, research has shown that significantly smaller classes make a difference in the earliest grades. San Diego’s decision to set a class size of 17 at its poorest schools was based on the most influential study in the field, the Tennessee STAR project. That research, done in the 1980s, concluded that students in small classes (13 to 17 children) outperformed those in regular classrooms (22 to 25) in kindergarten to third grades. The gains were biggest among poor minority children, and that advantage continued for years to come.

Last year, Dawn Taylor transferred her son Dakan, who has a learning disability along with cystic fibrosis, a lung disease, to Central, where she knew he would be in a first-grade class of 16, compared with 25 at his former school. “He’d been overlooked,” she said. “Now, he likes school, he reads well, his grades show pickup.”

Kym Lugo, Dakan’s teacher, is never too far from any of her 16 students. She listens for his breathing and coughing, watches that he eats and drinks properly. “He needs his protein,” she said.

Ms. Lugo has experienced the difference, struggling with a summer school class of 30 last year. “I had kids cutting each other with scissors,” she said. “It was more discipline than learning.”

Fourth- and fifth-grade teachers at Central can have up to 35 students per class, but the school has three support teachers to help ease the load. Each day they pull out half of the students for extra instruction in English, math and science.

Francesca Virtue said she can also see the benefits that several years of smaller classes has had on the students who entered her room in September. “They progress much quicker,” she said. “Before getting to me, each child got the needed attention.”

In the past, she was never able to cover the entire fourth grade math curriculum before the state test. “There were always lots of items on the test we never got to,” she said. “This year I was able to cover everything.”

Teachers want to be at Central; 37 of the 38 have been at the school at least six years. Students want to be there, too; annual turnover is 20 percent versus 42 percent eight years ago.

And test scores have steadily risen since Ms. Marten arrived at Central eight years ago as a literacy coach (she has been principal since 2008): 41 percent of the students are now proficient in language arts compared with 18 percent in 2004.

As the school improved, Ms. Marten has been able to attract outside support. She has partnered with a nonprofit agency to open a day care center at Central for teachers’ children and with a local foundation to open a medical clinic on site.

There was a time, before Ms. Marten, when Central’s test scores were considered a national miracle. In 2000, the school registered a record one-year test score gain, with its California Academic Performance Index score jumping 20 percent. In recognition, the state awarded every Central teacher a $20,000 bonus.

Shortly before being elected president, George W. Bush made a campaign stop at the school, calling it a shining example of what his education reform — which became No Child Left Behind — would accomplish.

Alas, a year after Mr. Bush’s visit, Central’s state score dropped nearly 10 percent; the year after that, another 4 percent. Indeed, it was not until 2010 that Central matched its 2000 score.

The amazing single year score had not reflected student growth; it had reflected the unreliability of the test.

Nor did the $20,000 bonuses make a difference. Greg Leland, a fifth-grade teacher, was delighted to get his, though, he said, “with or without a bonus, I always try my best.”

At first, San Diego’s class size commitment came at modest cost. In the late 1990s, California had passed legislation to finance early grades at 20 students per class, so getting the ratio to 17 to 1 was not much of a stretch. But two years ago, there were state cuts, and early grade class size climbed to 24 in most places.

Mr. Barrera, the board president, said if the district has to go to 30 to 1, it would do substantial harm. “You’re pretty much guaranteeing you’ll lose five or six kids per class,” he said.

Leaders of the so-called reform movement, including Mr. Gates, Mr. Duncan, Mr. Bloomberg and Mr. Klein, say that in hard times, increasing class size is one of the best ways to save money, as long as there is a strong teacher.

Central parents like Ms. Taylor and Rosa Penamoya do not agree. For them, nothing matters more than small classes. At the start of school, they count heads in their children’s classrooms and for the rest of the year keep checking. In February, Ms. Taylor noticed there were 16 names on Dakan’s Valentine card list. Ms. Penamoya noticed that when she was asked to send in a treat for her daughter Aryanna’s third-grade class, she needed to make 19 cupcakes.