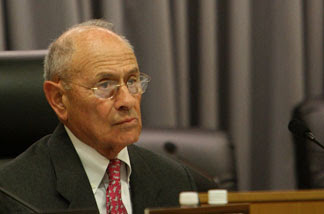 13 June 2011 - Some parents of students at L.A. Unified’s new arts high school are upset that the school board’s moving forward with plans to name the campus after recently retired superintendent Ramon Cortines. The school board’s set to approve the naming Tuesday.

Former Superintendent Ramon Cortines was surprised by the board’s proposal. "I’m humbled, but also I’m honored. I’m not dead yet. Usually you name schools after people that are dead."

The president of the Parent-Teacher-Student Association at L.A. High School Number 9 told the L.A. Times parents are upset the school board didn’t consult them.

"I certainly don’t want my name on anything where I’m not wanted," said Cortines.

The campus has had its share of ups and downs. Its avant garde design, pushed by philanthropist Eli Broad, significantly increased construction costs.

The school’s had several principals, and Broad has withheld millions of dollars in pledged money after the district did not limit enrollment with formal applications and required auditions.

I know nothing about Ramon C. Cortines other than his belligerent attitude to improving the quality of food for children, as displayed multiple times on Jamie Oliver's Food Revolution program.

I have just watched the last episode (here in the UK), I hope when it is aired in the US that Ramon C. Cortines sees how foolish he looks compared to the mature attitude demonstrated by the new Superintendent.