Editorial By The  LA Times Editorial Board | http://lat.ms/1ywAeSV 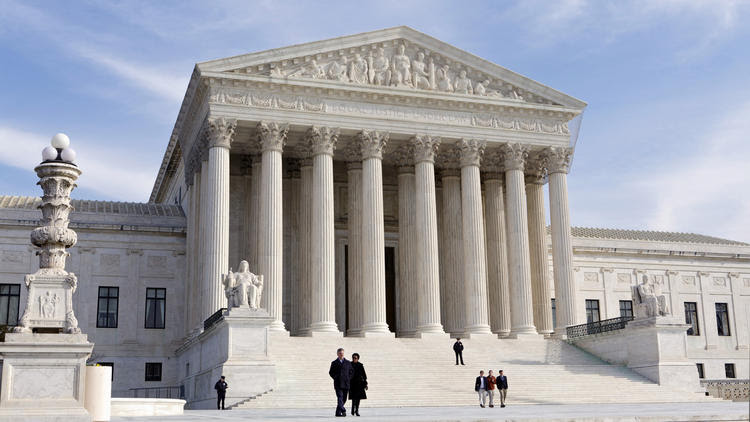 The  Supreme Court rejects a free-speech appeal from several California high school students who were told they could not wear a shirt emblazoned with an American flag on the Cinco de Mayo holiday. (J. Scott Applewhite / Associated Press)

31 Maych 2015  ::  Almost half a century ago, in a case involving students who wore black armbands to protest the Vietnam War, the Supreme Court proclaimed that schoolchildren don't “shed their constitutional rights to freedom of speech or expression at the schoolhouse gate.” This week the court declined to hear a case from California that would have offered an opportunity to reaffirm that principle.

In 2010, some students at Live Oak High School near San Jose wore shirts with the American flag to school on Cinco de Mayo. An assistant principal was told by a student that “there might be problems” as a result. (A year earlier, Mexican American students had reacted with profanity and threats when some white students hung a makeshift American flag and chanted “USA.”)

At the direction of the principal, the students were told to either turn their shirts inside out or take them off. Two students who refused were told to go home.

To a Latino student — particularly an immigrant — an assertive display of the U.S. flag by a classmate on Cinco de Mayo might be offensive. But some students might also have been offended by the anti-war armbands. Both are forms of free speech.

The students who wore the flag shirts sued the Morgan Hill Unified School District, claiming their 1st and 14th Amendment rights had been violated. But the U.S. 9th Circuit Court of Appeals rejected their claim, holding that the possibility of an “altercation” justified the decision to order the students to remove or hide their shirts.

The Supreme Court's refusal to consider [this case] is another sign that it's ambivalent about the principle of student free speech it enshrined in 1969 but has whittled away at. -

Many parents probably would endorse that “better safe than sorry” reasoning. But it's hard to square with the Supreme Court's stirring support for student speech in Tinker vs. Des Moines School District, the 1969 armband decision. As lawyers for the Live Oak students pointed out to the Supreme Court, the officials' actions were a response not to a clear threat of disruption but rather to “unrealized and unarticulated student unrest.” What's more, the officials gave a “heckler's veto” to students who might have been offended by the American flag shirts.

These are serious arguments. The court's refusal to consider them is another sign that it's ambivalent about the principle it enshrined in 1969 but has whittled away at in subsequent rulings. In a concurring opinion in one of those cases, Justice Clarence Thomas complained that “we continue to distance ourselves from Tinker, but we neither overrule it nor offer an explanation of when it operates and when it does not. I am afraid that our jurisprudence now says that students have a right to speak in schools except when they don't.”

Although we believe the court should have taken this case to reaffirm Tinker, we agree with Thomas that school administrators everywhere are entitled to clarity from the court about what the 1st Amendment requires inside the schoolhouse gate.