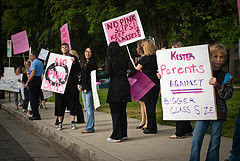 3/11/15  ::  The Los Angeles Unified school board is warning 609 counselors, foreign language and art teachers and other employees they may be reassigned or laid off at the end of the school year.

<<File photo: LAUSD school board members voted to send hundreds of layoff notices to district teachers and other workers. The teachers union, which is in labor talks with the district, called the notices a "scare tactic." Manny/Flickr

Administrators project a deficit of $160 million next school year and say the layoffs may be necessary to keep the district afloat. Once final budget figures are in, the district can – and often does – rescind what are known as RIFs, or Reduction in Force notices.

The district is in the middle of labor negotiations with the teachers union, UTLA. Union President Alex Caputo-Pearl said administrators are using the layoff notices as a scare tactic.

The California legislature plans to increase school spending, and L.A. Unified is expecting an additional $230 million for the next school year. But district administrators said declining student enrollment coupled with rising pension and heath care costs will make it difficult to balance the budget.

The board spent 56 seconds discussing the layoff warnings at Tuesday's meeting and voted 5-2 to approve the notices.

Board member Steve Zimmer said he was committed to "restoring every single one of these" positions before also voting yes.

Members Richard Vladovic and Bennett Kayser opposed the measure. The two, along with Galatzan, are in runoffs in their bids for reelection.