DESPITE DEFICIT FEARS, LAUSD BUDGET TO END YEAR IN BLACK; NEXT YEAR’S OUTLOOK IS CLOUDY

LAUSD Superintendent Ramon Cortines is predicting the school district will face a $160 million deficit in the next school year. 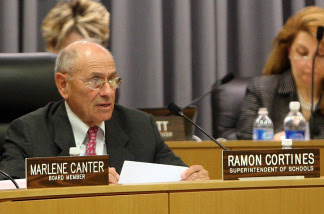 March 10, 2015  ::  The Los Angeles Unified board meets today to discuss the fiscal health of the country's second largest school district: Revenue projections suggest a more positive outlook this school year than next.

Los Angeles Unified officials project the district's expenses will be nearly $200 million lower than expected by the end of the current year, according to an interim financial report prepared for the Los Angeles County Office of Education.

Next school year, the outlook is less certain.

<<Superintendent Cortines v.2.0  He is now in his third iteration. David McNew/Getty Images

"We can likely pay our bills this year, but there is about $282 million dollars in the out years that we cannot say right now how we are going to pay for," said Lydia Ramos, district spokeswoman, told reporters Monday.

The size of the estimated deficit for the 2015-2016 school year has fluctuated over recent months. LAUSD Superintendent Ramon Cortines projected a deficit of more than $300 million in October. The amount then fell to $88 million in January and, in February, jumped to $160 million.

"If you are looking for a way to say you have no money, you just forecast all these bad things. At the end of the year, the money is going to be there," Skvarna said.

The district can expect an extra $780 per student next school year, according to its January projections of the state's average daily attendance allotments.

Still, Cortines is sounding the alarm: enrollment is declining, which can lead to fewer dollars from the federal government. Meanwhile, costs for employee retirement and health benefit programs are increasing, special education expenses are on the rise and short-term funding sources are expiring, according to district officials.

"These liabilities threaten our sustainability, and we need to start a path towards fiscal responsibility," Cortines said in a letter to the school board.

Cortines is recommending layoff notices be sent to more than 600 teachers and staff to close the budget gap. The notices don't guarantee that workers will lose their jobs. Often, a percentage of such notices are rescinded before school starts up again in the fall.

The union is requesting an 8.5 percent raise along with other demands. Cortines said the district can't afford more than a 5 percent pay increase.

The two sides are meeting with a state mediator on March 26.