31 March 2015  ::  Allow me, if you will, to explore some territory sometimes not explored, with bits of it sure to upset everyone. On occasion one must pick up the rocks and inspect the creepy-crawlies lurking below.

If you remember the opening credits of Twin Peaks, this is like that.

If you will, hearken back to the Autumn of 2010 – with Dr. Deasy – transitioning into the superintendent’s job - campaigning tooth+claw for Value Added Assessment of Teachers based on test scores – and UTLA’s resistance thereto – fought at the Board of Ed and up in Sacramento and in the courts – but mostly contested in the pages and airwaves of The Media.

At the time these pages called the effort “Value Addled Assessment,” thinking ourself quite clever.

The LA Times ran an end-around, got all the teachers’ test scores through a Freedom of Information Act  Request  and commissioned its own study, cloaked it in some questionable scholarship – which it released with great fanfare and self promotion. This undoubtedly temporarily  increased The Times declining readership by more than the number of UTLA members who cancelled their subscriptions.  The Times was in bankruptcy at the Time, some would say this proved a new level of moral bankruptcy.

In essence The Times outed Good Teachers and Bad Teachers in a Database of Shame.

Even Dr D distanced himself from the Times action – reminiscent of Henry II’s shock when his unfortunate question “Who will rid me of this troublesome priest?” led to the murder+sainthood of  his BBF Thomas à Becket back in 1170 and spawned a cottage industry of Becket chroniclers from Chaucer to Edward Anhalt.

Up to now our tale has been quite jolly+amusing …but one teacher, 39 year old   Rigoberto Ruelas Jr., took his bad teacher review in The Times quite seriously and committed suicide – driving up to the Angeles Crest and jumping from a bridge. A very difficult thing to explain to his fifth-grade students at Miramonte Elementary School.

There was soul searching and finger-pointing and recriminations – [“Suicide Raises Questions About LA Times Teacher Rankings” (AP)  http://huff.to/1OW51mP] and Dr. D was never able to get his Value Added /Growth Over Time Assessments ….though not for lack of trying.

Why bring this up now you ask?

Because we owe it Rigoberto Ruelas.

Because today is the deadline for the application to renew the CORE California Waiver to NCLB …which hinges on Value Added Teacher Assessments.

And because there has been another development.   …or maybe not.

Maybe it’s a stretch to connect the murder of his wife and the trial and conviction this week of third grade teacher Michael Kane to his LA Times Teacher ratings. After all he was rated More Effective than Average  (in Math)  and Most Effective (in English)

Maybe Rigoberto Ruellas was just having a bad day back in 201o.

I’m offended.  I hope I haven’t offended you too much.

Going all Zen: Consider the metaphor of the stone tossed into the pond and the resultant ripples.

4LAKids normally doesn’t cover stories of LAUSD employees who misbehave outside of work where it doesn’t impact the workplace. Being an LAUSD employee doesn’t make you a bad person; employing a bad person doesn’t make us a bad district. The District has 50,000+ workers. Some will murder their spouse. Some will fix multimillion dollar contracts for multinational corporations. Some will cross the street even though the sign says “Don’t Walk”. Human nature meets the law of averages.

LA Unified teacher convicted of stabbing his wife to death

Michael Kane, who was a teacher at L.A. Unified's Nestle Avenue Charter Elementary School in Tarzana, fled the scene. He was arrested in ...

A 3rd grade teacher at Bassett Street Elementary in 2010

These graphs show a teacher's "value-added" rating based on his or her students' progress on the California Standards Tests in math and English. The Times’ analysis used all valid student scores available for this teacher from the 2003-04 through 2009-10 academic years. The value-added scores reflect a teacher's effectiveness at raising standardized test scores and, as such, capture only one aspect of a teacher's work. 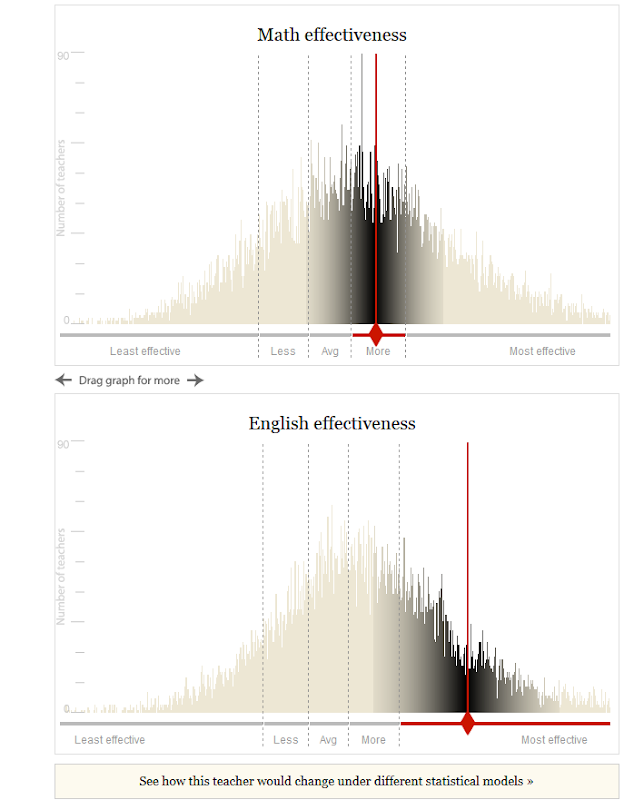 See how this teacher would change under different statistical models »

The red lines show The Times’ value-added estimates for this teacher. Kane falls within the “more effective than average” category of district teachers in math and within the “most effective” category in English. These ratings were calculated based on test scores from 64 students.

Because this is a statistical measure, each score has a degree of uncertainty. The shading represents the range of values within which Kane’s actual effectiveness score is most likely to fall. The score is most likely to be in the center of the shaded area, near the red line, and less likely in the lightly shaded area. Teachers with ratings based on a small number of student test scores will a have wider shaded range.

The beige area shows how the district's 11,500 elementary school teachers are distributed across the categories.

The Times gave LAUSD elementary school teachers rated in this database the opportunity to preview their value-added evaluations and publicly respond. Some issues raised by teachers may be addressed in the FAQ. Teachers who have not commented may do so by contacting The Times.

UPDATE 30 March 2015: Kane has been on unpaid leave with the school district since June 2013, district spokesman Thomas Waldman said. District officials are "swiftly reviewing the case" and Kane's formal dismissal is expected to be taken up at the school board's next meeting in April.