THE KIDS CROSSING THE BORDER

The new crisis at the border: undocumented and unaccompanied minors 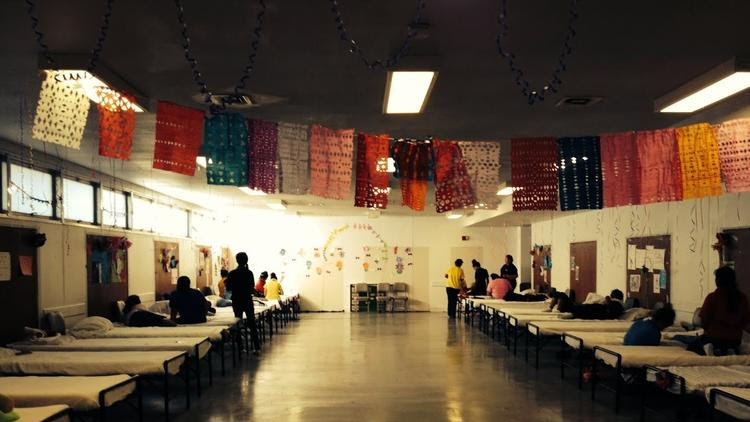 Immigration authorities have opened a shelter at Lackland Air Force Base in Texas to house a rising number of unaccompanied minors who have been crossing the U.S.-Mexico border illegally. (Department of Health and Human Services)

June 15, 2014  ::  Facing a massive rise in the number of undocumented and unaccompanied minors crossing the border, overwhelmed Obama administration officials are seeking up to $2 billion from Congress to deal with the "urgent humanitarian situation." In addition, the administration is creating a new branch of AmeriCorps to provide 100 lawyers or paralegals to help the unaccompanied youngsters navigate the deportation process. Both are good and welcome steps.

More than 47,000 children traveling alone have been detained while crossing the border since October, nearly double the number detained in the same period last year.-

These steps follow the creation of an interagency Unified Coordination Group to help ensure that the children are decently fed and cared for while their deportation cases unfold. And the administration is opening temporary shelters at military bases, including the Naval Base Ventura County at Port Hueneme, to house the children.Why such urgency? Because more than 47,000 children traveling alone have been detained while crossing the border since October, nearly double the number detained in the same period last year. On Thursday, border officials announced they were investigating assertions that children were being mistreated by border agents; some apparently reported that they had been deprived of food and medical care, while others complained of physical abuse.

It's a vexing problem. Despite the simplistic assertion by the right that the surge in minors is the result of an eased approach to immigration enforcement by the administration, activists interviewing the children say most are sent north by their families in Guatemala, Honduras and El Salvador seeking to protect sons and daughters from rising gang and drug violence and sexual assault. This is clearly a regional problem requiring a regional solution, and the administration has taken the welcome step of expanding discussions with the involved nations to stem the flow.

Meanwhile, the kids are here, and more are on their way. The "justice AmeriCorps" program will add to the existing and overwhelmed pro bono network of lawyers trying to ensure fair hearings for unaccompanied minors who face human trafficking, physical abuse and other terrors should they be returned to their home countries. This is not to argue that they all have a right to stay in the U.S., but it is only fair that they be represented by an adult during their deportation hearings. An added bonus: Having a lawyer speeds up the process.

It is unlikely the House will take up immigration reform before the August recess. Obama's critics complain that by seeking regulatory rather than legislative solutions to the immigration problem, the president is ruling by fiat. But House Republicans created the problem with their intransigence. They should abandon their obstructionism and tackle this issue. If they don't, voters should hold them accountable.

Please compare+contrast that story with this one, from the same paper. Emma Lazarus’ Golden Door – and the Dream dreamers dream – are not unique.

They also recover bodies of 10 migrants whose dinghy had overturned in the Mediterranean Sea.

June 15, 2014  ::  ROME — The Italian coast guard and navy have rescued more than 300 migrants whose boats ran into trouble in the Mediterranean Sea and recovered the bodies of 10 migrants whose dinghy had overturned.

Naval official Salvatore Scimone said 39 survivors on Saturday had grabbed onto the dinghy until rescuers plucked them to safety aboard another boat. He said he feared that an undetermined number of others were missing in the sea north of Libya.

In a separate rescue, three Italian ships took aboard 281 migrants who said they were Syrian and whose fishing boat ran into problems. They were being taken to the Italian mainland.

Tens of thousands of migrants seek to enter Europe illegally every year, crossing the Mediterranean in rickety smuggling boats.