Op-Ed: WORLD WAR I, A WAR TOO EASY TO FORGET

In the rush to prepare kids 'to compete in the global economy,' current events and a lot of history get lost 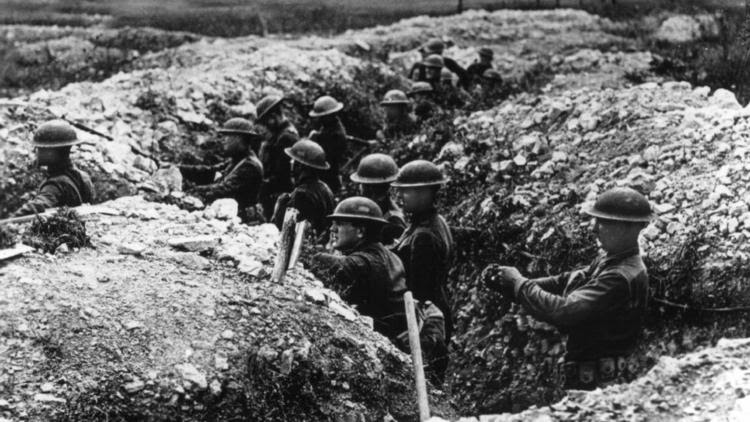 United States Army troops stand in the trenches in France during World War I. (Associated Press)

22 June 2014  :: Commenting recently about seeing the play "War Horse," one of my 11th-grade students expressed surprise that "even some of the Nazis had humane feelings" for the plight of animals caught up in war.

"It's about the First World War," I replied. "There weren't any Nazis in that one."

"No Nazis?" He sounded disappointed. "Darn!"

It is not the first time kids in my history classes have misplaced the Nazis. They often identify Hitler, not Kaiser Wilhelm, as the German leader in the Great War. A 12th-grader once even responded to a comment I made about World War II by asking: "Does that mean there was a World War I?" I cringed, but tried to console myself with the thought that it was early in the school year.

Both Hollywood and high school portray the past as Manichaean conflict. 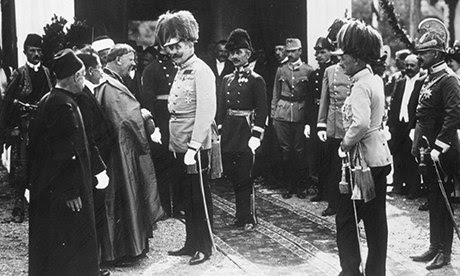 Now is a good time to explore why young people conflate the world wars, why World War II eclipses World War I in their view of the past, and the costs of wearing historical blinders. June 28 marks the centenary of the assassination of Archduke Franz Ferdinand, which triggered World War I. Historians are having a field day with new studies of the Great War that identify it as the starting point for almost every significant global event since, from terrorism to genocide. Europeans are commemorating the anniversary with pomp, circumstance and curricular attention in schools.

Assassinated by on teenager: Archduke Franz Ferdinand in Sarajevo on June 28, 1914 >>

Americans, however, continue to dwell on other conflicts — mainly the Civil War and World War II. Both are labeled "good wars" because one eradicated slavery and the other fascism, thus justifying the profuse violence and mass death. So the standard lesson goes.A lot of my students' thinking about these two good wars comes from Hollywood and movies such as "Lincoln," "Glory," "Schindler's List" and "Saving Private Ryan" — films often shown in high school classes. But even the edgier movies my cool students see outside of school play surprisingly well to the official narrative. Quentin Tarantino's "Inglourious Basterds" and "Django Unchained" are chock-full of sadistic Nazis and crazed antebellum Southerners who fit perfectly with binary notions of struggle. If Tarantino's good guys are not so nice, well, any degree of nastiness seems justified toward bad guys that depraved. Both Hollywood and high school portray the past as Manichaean conflict.

This storyline borders on myth. In their book "The Dominion of War," historians Fred Anderson and Andrew Cayton point out that popular understanding of U.S. history mirrors the arrangement of monuments on the National Mall in Washington. We conceptualize our past as dominated by three fights for freedom: the Revolutionary War, symbolized by the Washington Monument at one end of the Mall; the Civil War, enshrined in the Lincoln Memorial at the other end; and World War II, with its memorial in the middle. Wars that complicate the theme either get relegated to the periphery, as are Vietnam and Korea, or omitted altogether, as is World War I.

"Good wars" make for monumental stories, but they do not invite complexity of thought. The ends always justify the means. While teachers have a responsibility to make complex subject matter comprehensible, we have an equal obligation not to oversimplify or cater to cliches. To riff on Socrates: An unexamined belief about war is not worth having.

From a Socratic perspective, World War I offers perfect material for asking hard questions. How, for instance, could a relatively inconsequential act of terrorism committed by a teenage extremist from the margins of Europe drag the great powers into conflict? Why did trenches and a pointless war of attrition develop and persist for more than four years on the Western front? How did the bombing of cities, mass conscription, modern propaganda techniques, poison gas and the starvation of civilians by blockade come to be seen as acceptable, even essential, behavior? Were troop mutinies and pacifist activities justified? Were peace advocates heroes? How about official measures to stop them: Were they ethical? Were any higher principles at stake? Did good prevail? And, of course, how did the botched peace result in the rise of the Nazis?

I like to imagine that teachers everywhere have the flexibility to seize major anniversaries and current events as teachable moments, but educational norms suggest otherwise. I work at a private school. The trend in public education is to stricter standards, more quantity and less tolerance for individual initiative. Writing 20 years ago about June 28 as a lost date in popular memory, the late historian Eric Hobsbawm lamented that "most young men and women at the century's end grow up in a sort of permanent present lacking any organic relation to the public past of the times they live in." Hobsbawm found this development an "eerie" manifestation of postmodern distractedness.

Public schools today exemplify distractedness. Politicians, pundits and the authors of the Common Core standards insist that schools prepare kids "to compete in the global economy" and attain "21st century skills." In frenzies of test preparation, current events and a lot of history get lost.

I doubt that understanding the Great War will help young people "compete in the global economy." In fact, insight into that war's causes might lead kids to rethink entirely international competition as an educational goal. Yet I believe that wrestling with that war's complexity will make for better citizens: thoughtful, cautious about letting a president take us to war, concerned with the "collateral damage" inherent to modern conflict, and able to consign Nazis to their proper historical place.

Just the other day, one of my 11th-graders offered perhaps the best justification for studying World War I: "It began this process of dehumanization through technology that got worse in World War II and is still a problem today." This comment suggests cause and effect. It connects past and present. It acknowledges how historians see the past as a series of problems. It identifies modern warfare's unique capacity to brutalize and dehumanize.

I cannot pretend to know what educational leaders have in mind when advocating for 21st century skills, but my students keep showing me how the intellectual richness of studying the Great War trumps "good war" history.