* …or maybe the Board of Education? 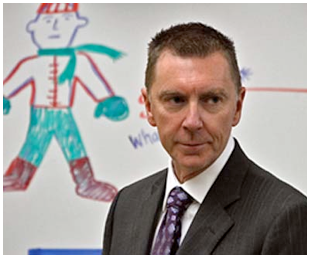 06 Jun 2014  ::  We sat at assigned tables. They read us stories. We colored. They reviewed the rules. If we behaved, we got to watch a video. Adults helped us find our words, and wrote them on posters for us. Then we got stickers to tag our favorites on the posters.  Free lunch was provided by Cafeteria Services. Most of us threw away our apples.

School districts must show in their new Local Control and Accountability Plans (LCAPs) how they spend to support student learning generally, and under-served populations, specifically.

Proportionality is a guiding principle, calculated to ensure that services for high-needs students are "increased or improved" in proportion to the amount of additional dollars they bring to the district.

The legislature only promulgated the template for this sea-change via emergency regulations in January.  So the timeframe for stakeholder engagement prior to School Board approval in June is compressed.  The PAC's task--in a mere three hours--was to submit comments on the draft LCAP.  By law, Superintendent Deasy must respond to our comments in writing.

Problems were apparent from the get-go.  The document we received could only be graded as incomplete, with missing pages, blank sections, and no contextual information on other funding streams for the proposed line items (recommended in the legislation, and helpfully provided in other Districts' drafts).

If we hoped for a 21st century vision for the best use of $4.5 billion in educational opportunity for the largest concentration of under-served youth in the State, our hopes remain unfulfilled.  Instead, we got a grab bag of justifications for existing programs and administration; disjointed at best, misleading at worst.

We asked for and eventually received the proportionality calculation missing from the LCAP's final section.  However, it reiterated a misstatement from Superintendent Deasy to the School Board that proportionality only applies to the "new" dollars each year. Even as the funding formula increases distributions to Districts, the "new" gap funding compared to the prior year's increase actually shrinks over time. This seems a tricky way to decrease the amount that must be spent on the neediest children -- and contrary to the law.

But back to our day in Kindergarten working on issuing comments for Deasy's written reply. Seated in small groups, we were given eight minute periods to generate comments on broad swaths of the LCAP, some worth nearly $1.9 billion of expenditures. And we had to relay our comments to our "Parent Coaches" -- District employees with varying levels of comprehension and dedication to accurate transcription on the posters.

Thus comments like, "The Elementary School Focus line appears to reduce spending for Arts, Libraries, and Assistant Principals by over $7 million for next year," magically became: "This reduces funding for schools."  Once posted on the wall, devoid of any context, that phrase appeared misinformed and untrue, rather than factually reflecting the independent research District personnel suggested we conduct.

Meanwhile, the "iPads for all students!!!" comment gathered stickers of approval. If our District had provided the requested budgetary data, PAC parents would have known how many iPads are purchased with bond money -- separate funding invisible in the draft LCAP.  Did these parents mean to say they wanted to use basic education dollars to buy more than one iPad per student?  We'll never know since we never convened as a whole to form consensus and comment in our authentic voice.

The best part of Kindergarten was missing:  Circle Time, when you take turns sharing, keeping ears open and mouths closed while your friends speak.

Ultimately, the District's legal obligation of accountability to parents for improved services for our neediest youth is not child's play.  Committee members should be treated like adults.  Instead of elevating speed over comprehension and forced choices over informed analysis, the District should let this deliberative body work collectively to give meaningful and constructive feedback. We are parents, after all. That is what we do.