TEACHING THROUGH TRAUMA: LAUSD says budget’s to tight to treat stressed out kids 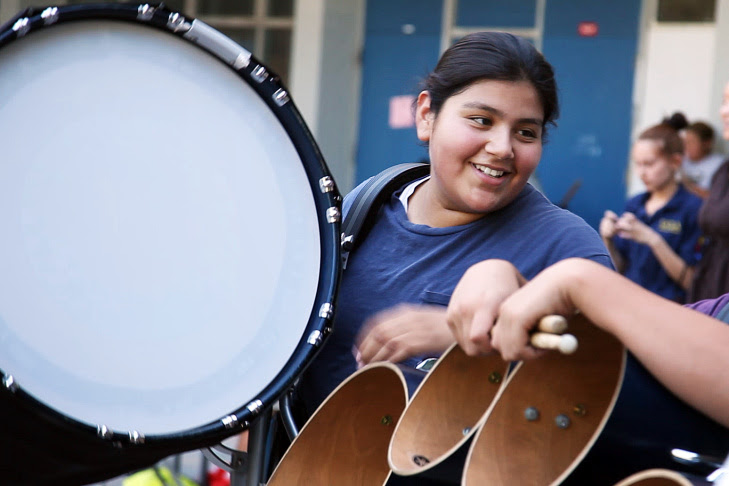 Like many students at Highland Park's Franklin High, ninth-grader Noemi Potenciano lost a brother to a drive by. Across L.A. Unified services for students affected by trauma are extremely limited.

Teaching Through Trauma: the second in a series of stories on poverty in Los Angeles schools. Read Part One here.

June 4th, 2014, 5:02am  ::  At Benjamin Franklin High School in Highland Park, ninth-grader Noemi Potenciano and her friends sit at a table in the quad after school, listening to R&B music.

They are like a lot of kids in the Los Angeles Unified School District: The girls pull their hair back in bandanas - like wartime assembly line workers - and wear bright red lipstick. They are more likely to hit you back on Instagram than return a call. And every one of them knows someone who died from a gunshot.

Potenciano was in third grade, skidding across the blacktop at Monte Vista Elementary in a game of handball when Los Angeles police officers showed up. They put her in the back of the patrol car and took her home where she’d learn brother had been shot and killed outside the family house on Monte Vista Street.

The world was suddenly a very dark and very scary place.

Los Angeles public schools might look like fertile ground to try new approaches to helping kids with trauma and stress that researchers say can hold them back. It's the second largest school district in the nation and 80 percent of its students qualify for free and reduced lunch.

The district currently employs about 300 psychiatric social workers to serve roughly 800 schools — a ratio of about 2,200 students to one counselor.

As researchers work to solve one of the most persistent problems in public education  – why kids in poor neighborhoods fail so much more often than their upper-income peers – more and more they’re pointing the finger at what happens outside the classroom.

Shootings. Food insecurity. Sirens and fights in the night. Experts are finding that those stressors build up, creating emotional problems and changes in the brain that can undermine even the clearest lessons.

In a recent study at high-poverty schools, L.A. Unified officials found that eight in 10 kids had suffered three or more traumatic events in the preceding year alone.

One solution cropping up at a smattering of schools across the country: school-based therapy.

“These children need to feel empowered to be able to feel like they are agents of their own change,” said Dr. Victor Carrion, a professor and psychiatrist at UC Berkeley who’s working on interventions for kids suffering from what’s become known as toxic stress.

“They are going to have themselves for the rest of their life,” he added, “so the best thing they can have is to be equipped to manage traumatic stressors later in life.”

But at the Los Angeles Unified School District, counseling services have been in decline for years.

The issue is money.

Between 2008 and 2013, L.A. Unified lost $2.8 billion in overall funding from the state. School board member Steve Zimmer said it was a battle just holding on to teachers.

“We had a cataclysmic experience in the district with the budget. Everything that was, is no more,” Zimmer said.

Now, she said, her staff’s caseload consists almost entirely of students whose problems are so severe the district is required to treat them under the federal Individuals with Disabilities Education Act.

Students like Noemi aren't likely to see a school counselor unless they get so sick a psychiatrist diagnoses them as emotionally disturbed.

“You are always summoned to put out fires versus really embedding programs,” Escudero said.

The financial tide is only now starting to turn at L.A. Unified.

California is sending more money to schools to help the neediest students. L.A. Unified will see its budget increase by $332 million next year for a total of about $6.8 billion. But that still leaves the district – and California – near the bottom of school funding in the nation.

Even with the influx of cash, very few students will see a counselor.

The district is adding 97 counselors, but they’re going to a select group of schools to settle a lawsuit, and to help foster kids stay on track.

Yet Escudero said the need across the district is overwhelming.

Schools have long screened for common problems like dyslexia or poor eyesight. But screening for violence and trauma is extremely rare.

Escudero took part in a pilot program screening and treating students for trauma-related problems at four L.A. schools. She wanted to see how much of a difference full, in-school services would make.

With parent permission, children were paired with health workers, who filled out a 30-question survey in about 45 minutes.

The results surprised even Escudero. Of those students screened, 81 percent had experienced three or more traumatic events in the past year. The other 19 percent experienced zero to two such incidents.

Then the counselors probed deeper.

Have you had upsetting thoughts or images about the event that come into your head when you didn’t want them to?

Have you had bad dreams or nightmares?
Have you been upset when think about or hear about the event?  Such as breaking into a sweat of heart racing?

Escudero said she had to limit how many children she screened. She simply didn’t have the staff to treat them all.

Some enterprising schools have found a way to provide more services.

“We knew from our first year of operation that we working in a community experiencing a lot of trauma outside the school walls,” said Anna Ponce, CEO of Camino Nuevo Charter Academy. At its eight charter schools, therapy and “trauma informed” teaching have become a central priority.

About one in four Camino Nuevo students either get one-on-one counseling or participate in a support group.

What helps children suffering from the stressors of poverty is not far off from what works for veterans returning from war. Cognitive Behavior Therapy is a common evidence-based approach, where children narrate the incident and are guided through the relationships between thoughts, feelings and behaviors and are coached through coping skills.

To get therapists in its schools, Camino Nuevo tapped into a network of mental health service providers through the Los Angeles County Department of Mental Health. The state picks up most of the bill because most low-income students qualify for MediCal.

Those are the same funds L.A. Unified already taps into to pay for some of the care it does offer. But the district doesn’t do it on a large scale, according to the county’s records.

Instead, schools have to make connections on their own if they want to increase counseling.

About 70 of the 2,116 schools in Los Angeles County have worked out deals with government-funded mental health providers to get more counselors in their schools, according to Robert Byrd, clinical district chief at the Department of Mental Health. He doesn’t know how many of them are in L.A. Unified.

“Some schools really welcome them and set them up, give them access,” he said. “Some schools don’t have any room so its kind of hit and miss to try and find the place to meet with kids.”

Not everyone agrees the Medi-Cal model is best. Some of L.A. Unified's in-house psychiatric social workers argue a heavy reliance on MediCal would be ultimately discriminatory because undocumented students aren't covered.

No matter who's paying, Byrd said there’s no question it’s best to have counselors at the schools.

“The value,” he said, “is to catch the mental health needs early enough so that children and youth have a more positive trajectory in life and don’t need intensive services later.”

Afraid of the dark

After her brother was killed, Noemi had a hard time sleeping, worried the gang would come after the whole family.

“Every night I would pray to not be scared,” she said.

Teachers called up her mom, Grace Potenciano, to report her daughter was crying in school.

It took some legwork, but her mom was ultimately able to track down a counselor close to home, part of a program to help victims of crime. She was in no state to care for her daughter’s mental anguish on her own, she said.

“For three months, I didn’t know what day it was, what time it was,” Potenciano said. “You are just like a zombie.”

“Do you think the counseling helped me?” Noemi asked her mother.

“Yeah, because you are normal now,” she replied, and they both exploded with laughter.

L.A. Unified is experimenting with "wellness centers" as one way to increase counseling and health services for students and recently allocated an extra $50 million to expand them.

It runs 12 on- and off-campus centers where students and families can receive a variety of health services, staffed by mix of county-funded providers and school district employees.

“Students and families with the right supports have the power to transform their context,” Zimmer said on a recent tour of a center in an East Hollywood strip mall. He has field office there, too.

The center’s full-time psychiatric social worker, Rachel Badillo, said it’s a big challenge to treat children, many of whom have trouble even describing how their week has been.

“Sometimes kids have the words and sometimes they don’t,” Badillo said. For those that don’t, she holds up a card showing 10 faces displaying common emotions and tells them to point to one.

“Then we kind of explore it and work on positive coping,” she said.

As she was explaining the process to a reporter, she looked up at the clock. It was 4 p.m. Her next client was either late or a no-show.

Even at full capacity, the centers can serve only a tiny fraction of the district’s families. And kids and families have to find a way to get there, which is not so easy when you rely on public transit.

Escudero, of L.A. Unified, said she’s all for wellness centers. But if schools don’t have dedicated mental health workers, hundreds of thousands of students may continue to go untreated.

“Our services really have to be at the school site for them to be effective,” she said.