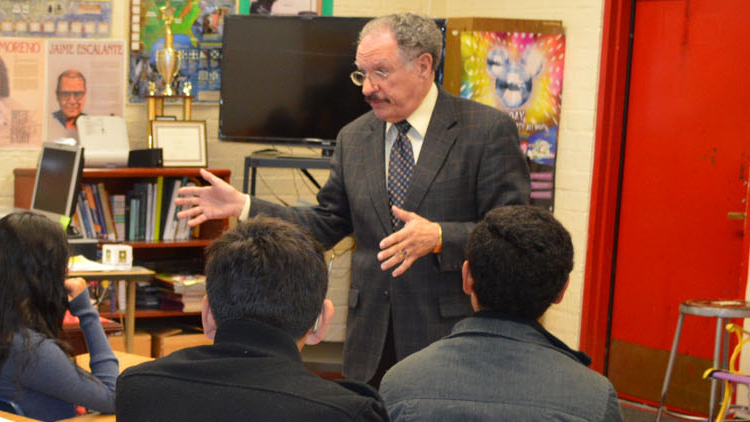 George McKenna, above, and Alex Johnson are headed for a runoff.

Published 8 June 2014 ::  The top two finishers in this week's election for the Los Angeles Board of Education will meet in an August runoff, but first they face another crucial contest: the race for money and powerful endorsements.

Especially in play is the influential backing of the teachers union and a second union that represents many other school employees.

On election day, George McKenna finished a solid first in a field of seven with 44% of the vote. Alex Johnson overcame minimal name recognition to collect nearly 25% in securing second place. 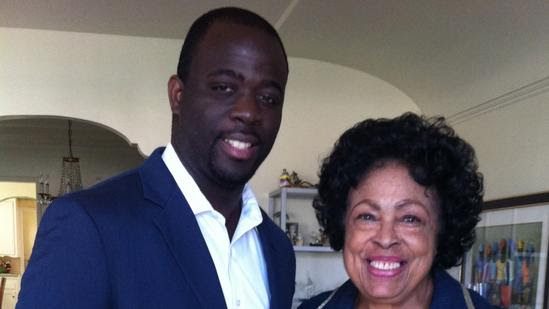 They seek to fill the final year in the term of Marguerite Poindexter LaMotte, who died in December. The winner will be well positioned to gain a full, four-year term in elections next year for Board District 1, which stretches across south and southwest Los Angeles.

Each faces challenges in getting over the top. McKenna, 73, a retired district administrator, has a community base, but needs dollars for a viable campaign. Johnson, 33, an aide to Supervisor Mark Ridley-Thomas, is likely to have strong funding, but needs more than that to close the gap.The two unions face a tough choice in deciding whom to back after mainly sitting out the primary.

In the first round, United Teachers Los Angeles endorsed three current or former teachers, but provided only nominal contributions to each. Of the three, Sherlett Hendy Newbill did the best, finishing a distant third. Combined, they collected 19% of the vote — lower than Johnson.

Still, a concerted, united effort behind one of them could have carried the day, said Alex Caputo-Pearl, the president-elect of United Teachers Los Angeles, which represents 35,000 members. On Wednesday, he offered cautious appreciation of McKenna.

"We can see from George McKenna's performance that he clearly has strong support in the community," Caputo-Pearl said.

McKenna did not hesitate to make an overture.

"I greatly respect the teachers who were in this race," he said. "I'm not here to represent a particular union, but I've always been an advocate for teachers and they know that."

Funding for McKenna also could come from the Service Employees International Union, Local 99, which did not make an endorsement in the first round. It represents 33,000 teaching aides, security aides, custodians, bus drivers and groundskeepers in the nation's second-largest school system.

For Johnson, the endorsements would provide additional credibility — and ground troops to go door to door for votes.

"I've had good conversations with the leadership and the membership," Johnson said, referring to both unions. "These are the men and women who are the backbone of the district."

Through the last campaign reporting date on May 28, Johnson had spent $353,468, more than all other candidates combined. Outside groups, especially charter school advocates, also spent more than $80,000 in independent campaigns for him.

Johnson especially benefited from the endorsement and connections of Ridley-Thomas.

Johnson "ran a great campaign coming from the back of the pack as an unknown," said Dermot Givens, an attorney and political consultant who was not involved in the campaign. "The major deciding point to me is whether Alex's momentum will catch George by August."

"With the clout of the supervisor, even with all the resources he had, Alex Johnson still didn't get 25% of the vote," she said.

Both unions could make endorsement decisions within the next week.

It's still unclear whether an outside group of philanthropists and civic leaders, the Coalition for School Reform, will get involved in the race. But many of its funders had already given directly to Johnson or to the charter schools group.