PROGRAM AIMS TO GET PARENTS ON THEIR CHILDREN’S ACADEMIC TEAM

New Open World Academy in Koreatown is using a new approach to the typical parent-teacher conference to get parents more involved in their children's education. 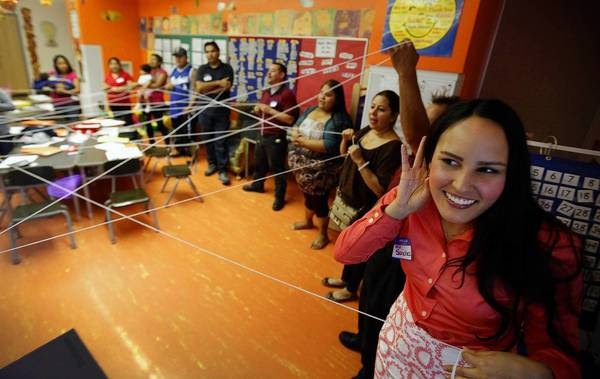 She learned that her 6-year-old, who attends New Open World Academy in Koreatown, could read 59 of the 96 "high-frequency" words he should have known by that time in the school year.

She found out that to remain at grade level, her boy would need to know nearly three times as many words by the end of the year. To help him stay on track, Rosas was taught reading games they could play together. And, she received a personal homework assignment: to help her son reach 160 words in the next couple of months.

This was no ordinary parent-teacher conference. For one thing, the 20 or so parents met as a group with teacher Bianca Sanchez. For another, Sanchez discussed students' performance data and then taught the parents skills to help their children at home. It's called Academic Parent Teacher Teams, a program aimed at helping parents take a more active role in their children's education.

Rosas listened intently on a recent afternoon as Sanchez explained in Spanish that the success of children relied heavily on their parents' efforts.

"You may think that you can't help — but you can," Sanchez told the mothers and fathers present. "Our goal is to support our children. You can help them succeed."

Developed in 2009 by Maria Paredes of WestEd, a San Francisco education research group, the new approach to the conventional parent-teacher conference attempts to guide parents to work with clear goals to increase achievement. Parents meet with teachers every 60 days to discuss grade-level competency, practice activities to use at home and set specific, data-driven performance goals to be reviewed at the next gathering.

Once a year, parents have individual, in-depth meetings with teachers to review their student's performance and collaborate on a plan to further progress.

"Parents walk away with a sense of commitment and a really clear vision for what their role is that they didn't have before," Paredes said.

Sanchez learned of the Academic Parent Teacher Teams last summer and pitched the idea to administrators — who gave her the go-ahead to try it. She presented the program to other teachers at the school, who were interested. The school is now using it in six classes, one each in kindergarten through fifth grades. New Open World Academy, a Los Angeles Unified campus that has more independence in hiring and evaluating students and teachers, is considered to be the first to employ the program in Los Angeles.

It's also being used at 158 public schools in 14 states and Washington, D.C.

New Open World's students, often from working-class, immigrant families, do not get much help from parents. It isn't because they are unwilling to help, but rather, they do not know how, Sanchez said.

"Our students are already at a disadvantage because they don't have that," she said. "So it's our job as a school, as teachers to do that outreach to bridge that gap."

Paredes developed the program while working to boost parent involvement at Creighton School District in Phoenix — a largely low-income K-8 district. She began studying parent attendance at school events. Her research showed that if the teacher was the leader of the event, parent attendance was consistently about 90%. If the meeting didn't involve the teacher or was not related to student performance, attendance plummeted to about 5%, she said.

Almost none of the events Paredes reviewed was related to student learning or classroom instruction. For parent conferences, teachers met individually with parents for about 15 minutes twice a year — which is typical throughout the country, she said.

Parent-teacher conferences typically revolve around student behavior, Paredes said. "It's usually about letting parents know if their kids are good boys or good girls in school and if they're turning in homework or not," she said.

She designed and implemented the program at several schools across the Phoenix district — monitoring student progress. At the end of the year, students whose parents went through the program progressed at a much higher rate than their peers who did not.

If given the tools, parents "will do the work and give their children that boost," she said.

At New Open World, parents practiced a reading game in which participants roll a die and read a series of words that correspond to the number rolled. Rosas, playing with another parent, went first.

"Mother, before, very, far, make," she read, earning 10 points for reading all the words correctly. She went on to win the game.

Rosas makes sure her four children do their homework each day but has struggled to help them with their assignments, she said.

"I always try to help them, but it can be difficult for me," she said. "But with the information they give us and the games — I have a way to help them myself now."

Her son, she said, is a bit rambunctious and always wants to play.

"I'm going to make it a point to do it each day," she said. "To reach the goal, we have to play every day. So that's what we're going to do."

After two weeks, her son had learned 14 new words. Only 87 words left until the next meeting.