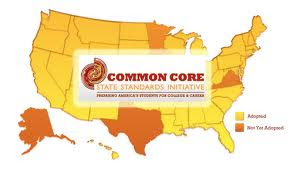 November 24 at 2:12 pm  ::  Massachusetts and Louisiana, both seen as important in the world of school reform, have decided to delay the implementation of high-stakes standardized tests aligned to the Common Core State Standards in the face of  growing concern about the initiative. The two states follow nearly 10 others — including Florida, the pioneer of corporate-influenced school reform — to slow or rethink Core implementation, actions coming amid a growing movement led by educators and parents who have become skeptical of the standards and the new related standardized tests.

Education Secretary Arne Duncan has been defending the Core — a set of common standards adopted by 45 states and the District of Columbia designed to raise student achievement —for months before various audiences, most recent recently getting himself in trouble with remarks about “white suburban moms” becoming Core critics because the new, harder exams have shown suddenly that “their child isn’t as brilliant as they thought they were.” (He apologized, blaming “clumsy phrasing.”)

But the opposition has grown, from the left, the right and the middle, expressing different concerns about the Core and its implementation. Though Duncan has said repeatedly that the Core is a state-led, voluntary initiative, the Obama administration has supported the standards, and critics on the right charge that the federal government has used it to develop a national curriculum. Critics on the left  and the middle have argued that the Core standards are not based on substantive research, that they ignore what is known about early childhood development and/or that reformers have rushed implementation before teachers have had time to absorb them and create materials to teach them.

The moves by Louisiana and Massachusetts matter because both states have big profiles in the school reform world.

Louisiana, whose governor, Bobby Jindal, has been a leader in standardized-test based school reform, announced late last week that it would delay the way students, teachers and schools are held accountable under the standards, the Times-Picayune reported. The high stakes for students that were supposed to be linked to the test scores of new tests designed to assess student progress under Core standards will not take effect in 2015 as previously planned, meaning that younger students won’t be held back based solely on a score and high school students won’t take the tests in 2015. Furthermore, until at least  2016, students in third and fourth graders will no longer be required to take Core-aligned tests on a computer.

Massachusetts has long been at or near the top of  rankings of states with excellent public schools and high curriculum standards, so its adoption in 2010 of the Common Core State Standards and its agreement to use Core-aligned standardized tests were seen as boosting the Core initiative’s credibility.  Now, a  decision by state officials  to slow down implementation of the new tests and assess whether they should be used at all could have a different effect on the Core.

The state Board of Elementary and Secondary Education last week approved a motion (see below) to use 2015, when Massachusetts had agreed to start using the new exams in schools around the state, as a pilot year and to assess whether the current standardized tests should be abandoned and replaced after all. Mitchell Chester, commissioner of education who came up with the idea to slow down the testing implementation, told Catherine Gewertz of Education Week:

Our system isn’t ready to deliver a college-ready education to all our students off the bat. I don’t want to get there by having students punished by not meeting that bar.

If Massachusetts, which has been known for having the most rigorous education standards of any state, doesn’t feel like it is ready to hold students — and teachers — accountable by Core-aligned test scores,  it raises questions about what other states can reasonably do.

Massachusetts was an enthusiastic supporter of the Core, becoming a founding “governing state” in the Partnership for Assessment of Readiness for College and Careers, one of two multi-state consortia that — with some $350 million in federal funds — promised to develop standardized tests aligned with the Core that were supposed to go beyond current exams and more deeply assess what students  have learned. (As it turns out, the new Common Core exams from PARCC and the Smarter Balanced Assessment Consortium won’t be the “game-changing” exams that Duncan has repeatedly said they would be because of a lack of enough development time and money, which you can read about here.)

This follows a decision by Rick Scott, the governor of Florida, which had been PARCC’s “fiscal agent” and a leading state in the consortium, to pull out of PARCC a few months ago and take a new look at the standards themselves. This decision was seen as important because Florida, under former governor Jeb Bush, pioneered corporate-influenced school reform that uses standardized test scores as the chief accountability metric for students, teachers, principals, schools and districts. Bush has retained influence on education policy in Florida and around the country in part through his organization Chiefs For Change,  a group composed of former and current state superintendents who believe in the kind of  school reform Bush pioneered from 1999-2007 in Florida.

In fact, earlier this year Chiefs for Change wrote a letter to Duncan urging him to resist calls, such as the one Weingarten made this past spring, for a moratorium on the consequences of high-stakes testing because the new Core-aligned assessments are unfairly being given to students before teachers have had time to properly absorb and create curriculum around the standards. After Louisiana decided to do that last week, the Chiefs issued a release praising him, without noting that the state’s education superintendent John White had done pretty much what Weingarten had suggested.

Meanwhile, Maryland just took over as fiscal agent for PARCC; State Superintendent Lillian Lowery said in a release last Thursday that Maryland “is strongly committed to the success of PARCC.”  However, her statement didn’t mention growing resistance among educators and parents in Maryland about the way the Core is being implemented in the state.

On Thursday, the Baltimore Sun reported, that state lawmakers peppered Lowery with questions about the Core after hearing from teachers and parents concerned that Maryland is trying to do much school reform at once– a new teacher evaluation system linked in part to standardized test scores, the Core standards and new assessment tests. Meanwhile, the Teachers Association of Baltimore County filed a grievance on behalf of the county’s 8,700 teachers saying that changes related to Common Core and the new evaluation systems are making them work hours far beyond their normal day.

Other states are rethinking the Core, too; Indiana has delayed implementation of the Core standards; Ohio recently did the same thing. A handful of states have pulled out of PARCC, and other states are debating the Core too. Gewertz wrote that a number of states are already starting to back away from an earlier decision to use the results of new Core tests as a high school graduation requirement, including Rhode Island and Arizona.

With so many states rethinking aspects of the Core, the initiative’s future is unclear. The vast majority of states remain committed to implementing the standards by state law, but with implementation of Core testing being delayed in a growing number of states and critics’ voices rising, the ultimate effect of the Core on student learning is up in the air.

This is the motion that was approved by the Massachusetts education board last week:

Board of Elementary and Secondary Education Meeting: November 19, 2013

MOVED:        that the Board of Elementary and Secondary Education, in accordance with Mass. General Laws chapter 69, sections 1B and 1I, hereby adopts the two-year MCAS-to-PARCC transition plan, as presented by the Commissioner, and directs the Commissioner to implement the plan.

Consistent with the Commissioner’s recommendation, the Board anticipates that the two-year pilot will:

Based on the results of the two-year pilot, the Commissioner will recommend and the Board will decide, in the fall of 2015, whether to sunset the MCAS English language arts and math assessments for grades 3-8 and employ PARCC as the state testing program for these subjects beginning in the 2015/2016 school year.