A tense vote by sharply divided board allows the $1-billion initiative to continue and imposes additional oversight, including evaluation of impact on student achievement. 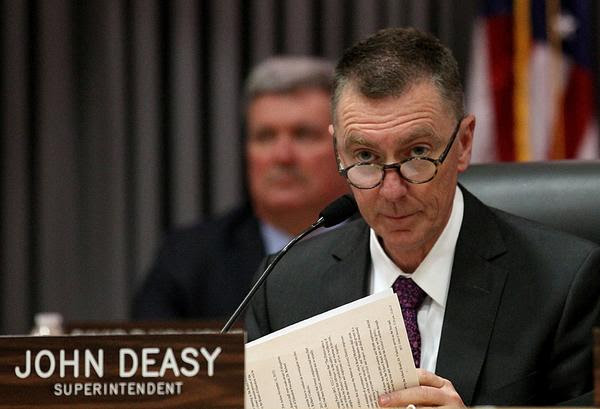 Tuesday's L.A. Unified board meeting marked the first public appearance of Supt. John Deasy in an iPad debate since the contract process began. He had stayed in the background, on the advice of attorneys, because he owned Apple stock. But he sold his shares before Tuesday¿s meeting, according to the district. (Luis Sinco, Los Angeles Times / October 29, 2013)

November 12, 2013, 11:16 p.m.  ::  A divided Board of Education agreed Tuesday to move ahead with a trimmed-down plan to provide iPads to Los Angeles students, but an evaluation will look at whether the project should proceed.

During a heated debate over the $1-billion project, board members raised numerous concerns, including whether the contract with Apple needs to be reconsidered and whether high schools should be provided laptops instead of tablets.

The decision, by a 6-1 vote that left no one happy, means that the distribution of iPads can continue as planned by schools Supt. John Deasy for this year. He had previously decided to scale back his original timetable after problems emerged during the rollout on 47 campuses this fall.

As a result of the board action, 35 campuses will receive iPads this year in addition to the 47 schools in the first group. Continuing the effort gained traction in large measure because L.A. Unified staff asserted that the devices to be purchased represented the minimum number necessary for students to take new state standardized tests in the spring.

The board move also included providing tablets to every teacher and principal in the nation's second-largest school system.

At the same time, the board approved new oversight measures proposed by board member Monica Ratliff, including an evaluation of how the tablets affect student achievement.

Deasy said this assessment would result in a delay in the districtwide rollout beyond the next 35 campuses, perhaps by as much as a year.

There also will be a new effort to provide laptops, rather than iPads, at seven high schools. Ratliff also wanted to review a range of devices and curriculum options currently in use elsewhere in the district and at local charter schools. This apparently also will go forward, although board members weren't entirely clear on the particulars of what they had approved.

"My intent is to make sure that students have the best devices and the best curriculum," Ratliff said.

Tuesday evening's 21/2 -hour debate clearly revealed how seriously at odds the seven board members are with each other. At one point, board President Richard Vladovic took Ratliff out of the room to nudge her to a compromise — she'd wanted to halt further iPad distribution this year.

Vladovic also stopped to talk to board member Tamar Galatzan, who lashed out at Ratliff, repeatedly referring to her as "ma'am."

Galatzan, who cast the sole dissenting vote, objected to delays in the iPad rollout.

"I don't believe we will get to equipping students with technology — ever," she said.

Her concerns were echoed by Monica Garcia, who proposing distributing the iPads in her board district, because her schools wanted them, she said.

"I haven't heard anything that is scarier than keeping our graduation rate and proficiency rates at the same place," Garcia said.

Board member Steve Zimmer said he was concerned that the contract to purchase the iPads was too expensive. He also had questions about the curriculum included on the iPad.

"I don't feel like we have the best contract," he said, adding later that "there is an inexplicable defense of this contract."

The rollout of the iPads quickly encountered problems, including more than 300 high school students who deleted security filters so they could surf the web freely. After that, officials reclaimed the iPads from students at three high schools and ordered the rest kept on campus. Concerns also have arisen about higher costs and future funding of the initiative.

Vladovic said the concerns do not represent a retreat on technology.

"We are not going to back off on our technology efforts," he said.

The meeting marked the first public appearance of Deasy in an iPad debate since the contract process began. He had stayed in the background, on the advice of attorneys, because he owned Apple stock. But he sold his shares before Tuesday's meeting, according to the district. He helped craft the compromise that allowed his initiative to continue.

The board's latest proposal next goes for review to a committee whose role is to oversee school bond spending. The iPad project is paid for with school construction bonds.

Don’t look for any wit/wisdom here – just the facts.

The compromise reached late Tuesday night was a political one – and contained absolutely no fiscal information about costs, expenses or financial implications to the District’s General Fund or Bond Funds. The plan was not even presented in written form – it was cobbled together on the fly from scraps of dialog like a Robert Altman movie – or A Night at the Improv. The Bond Oversight Committee will not decide based upon political merits but instead the legality of the action and the financial picture based on the actual written plan presented and:

Can you say  “Fiduciary Responsibility?”

No one last night ever aske : “How much will this cost and how will we pay for it?”

And unless those questions - and others still unresolved - are addressed in the District’s “ask” of the Bond Oversight Committee  well in advance of the scheduled meeting next Wednesday (ie: no later than Friday afternoon …we will brook no “Wednesday Surprise” ) this deal is very, very far from “done”.

A District insider opined last light that it seemed “like the board had left all the  details to the superintendent’s discretion.”   The BOC will not be so generous.