HOW APPLE, GOOGLE, CISCO ARE COMPETING FOR THE $5 BILLION K-12 ED-TECH MARKET

….if it is a $5 billion market, Apple/Pearson has already nailed 10% of it with their deal with LAUSD!

Updated: Nov 26, 2013, 1:37pm PST  ::  Next year, K-12 schools across the United States will begin implementing Common Core State Standards, an education initiative that will drive schools to adopt technology in the classroom as never before.

That’s prompting a scramble among Silicon Valley’s hardware, software and networking providers to grab as much of the $5.4 billion K-12 learning market as possible. Apple, Google, Cisco and a swarm of startups are elbowing in to secure market share. The sector is expected to more than double in size to $13.4 billion by 2017, according to GSV Advisors, a publicly traded venture capital firm. 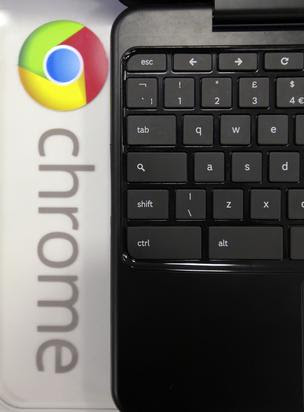 Common Core guides educators as to what students should know in English and math by the end of each grade level. Technology will play a large role in evaluating student success, encouraging use of more devices in the learning process.

Chris Ratcliffe - The Chromebook is increasingly being tested by K-12 learners, who will explore its keyboard's absorbant qualities through milk and juice box spills.>>

“The advent of Common Core is a change for schools, and change is great for startups,” said Karen Lien, director and partner at Imagine K12, a Palo Alto-based startup incubator and investment firm focusing on K-12 education. “The chance for major tech companies and startups to get in is pretty exciting.”

For Cisco, the opportunities in the classroom fall into three major categories: The core infrastructure in schools (routing and switching technology), collaboration technologies that allow professional development for teachers and other staff and finally, the data center needs of large education institutions.

“We work with schools to help them figure out how they’re going to implement technology against the Common Core,” said Renee Patton, head of Cisco’s U.S. public education sector team. “We help schools figure out how many classrooms will be tested at a time, and how many students will be connected to the web at any given time. We help schools figure out the gaps they currently have, and then we’ll engage Cisco Capital or our grants team to help them with financing if that’s necessary.

Patton said the trick for schools to maximize their returns on technology investments is to multipurpose the devices and systems they purchase. For example, the school district in Paradise Valley, Ariz., is using Cisco’s telepresence technology to provide an AP calculus class across 10 schools. There weren’t enough students at each individual school to warrant hiring an AP calculus teacher, but the ability to reach all the students at once with video technology allowed the district to offer the class.

The telepresence systems are also utilized by teachers and staff outside of school hours, Patton said, explaining that teachers at different schools can connect with each other to discuss curriculum or exchange advice, and administrators can use it for staff meetings or teacher in-service days.

Cisco’s competitors in the space include other networking companies like Juniper Systems and Avaya.

Cisco’s networking and infrastructure offerings allow schools to conduct large-scale deployments of hardware across classrooms, which is where providers like Google and Apple fit in.

During Apple’s most recent earnings call, CEO Tim Cook trumpeted the Mac maker’s control of 94 percent of the education tablet market (in the U.S.) and said the company earned more than $1 billion in revenue for the first time in the education sector.

The company, which did not respond to requests for an interview, sold 640,000 iPads to the Los Angeles Unified School District over the summer. It hasn’t gone completely smoothly. The rollout of the devices was recently delayed, with administrators citing concerns about the structure and cost of the contract with Apple.

Another concern: The ability of schools to manage the distribution of devices to tens of thousands of students. Along the way, some students learned to hack their way around access controls on the tablets.

There were also concerns that the Common Core-geared software embedded on the iPads from Pearson, the publishing giant that has long dominated the education market, was nowhere near ready for deployment.

The deployment and manageability of device distribution in classrooms is one of the biggest hurdles to integrating tech into schools, said Rajen Sheth, director of product management at Google, Apple’s biggest competitor in the education sector. The Mountain View-based company announced its education-focused app store, Google Play for Education, just this month.

“Google devices are deployed very easily,” Sheth said. “They basically go from the delivery truck to students with no IT intervention. You have to make it such that these devices are very easy to maintain.”

Sheth said Common Core standards are opening up opportunities for a much broader range of content and learning tools than were previously available because developers are easily able to align their products to the guidelines.

“Typically, only the largest providers (Pearson) were able to create content across states,” Sheth said. “Now, if I’m a 7th grade algebra teacher, I have a choice of apps, textbooks and videos to help teach the subject. That helps us at Google guide teachers in using technology too.”

Sheth said the most important thing to consider when deploying technology in classrooms is that it has to be goal-oriented.

“Tech in the classroom is great, but the technology by itself isn’t very effective,” he said. “When you start with goals and think about how you’re going to re-orient your teaching model to utilize technology in the classroom, it works much better. When you just throw devices in the classroom and teachers don’t know what to do with them, they either become a distraction or just end up not being used.”

One school district working closely with Google to bring devices to students and teachers is in Hillsborough Township, New Jersey. Joel Handler oversees the deployment of technology as it aligns with Common Core standards for 7,400 students.

“We’ve been a Google apps district for three years, and we brought Chromebooks into classrooms as a side bar thing, so if you wanted to use it, it was there,” said Handler. “It caught on well for literacy classes to collaborate on documents, and that’s where we saw it becoming more popular as a general collaborating tool.”

Handler said that today, the school district has distributed 900 Chromebooks to students in grades 5-12, and has deployed 3,000 Nexus 7 tablets to K-4 students.

The laptops and tablets, which have been leased from Google for the life of the devices, are intended to help fulfill the district’s three technology goals: Collaboration and publication of digital content, globalizing the curriculum (virtual field trips, etc.) and asynchronous learning (giving students the ability to learn at their own pace and convenience.)

The school district began with a pilot program, using both Apple iPads and Google Chromebooks in classrooms. Handler said he went with the Chromebooks because he saw students consistently collaborating in classrooms with the laptops, whereas the tablets were good at reinforcing individual concepts.

“If we didn’t have the Chromebooks, we would have said, ‘That’s awesome,’” Handler said. “But in Chromebook classes, students were always collaborating. They just totally embraced Google docs and the whole app infrastructure. That really drove it home.”

Handler said his goal for the next year is that all students in grades 5-12 will have a Chromebook, while all kindergarteners through fourth graders will get a Nexus 7 tablet to themselves.