PATRENA SHANKLING, THE SUBSTITUTE TEACHER DR. DEASY FIRED: In her own words + more 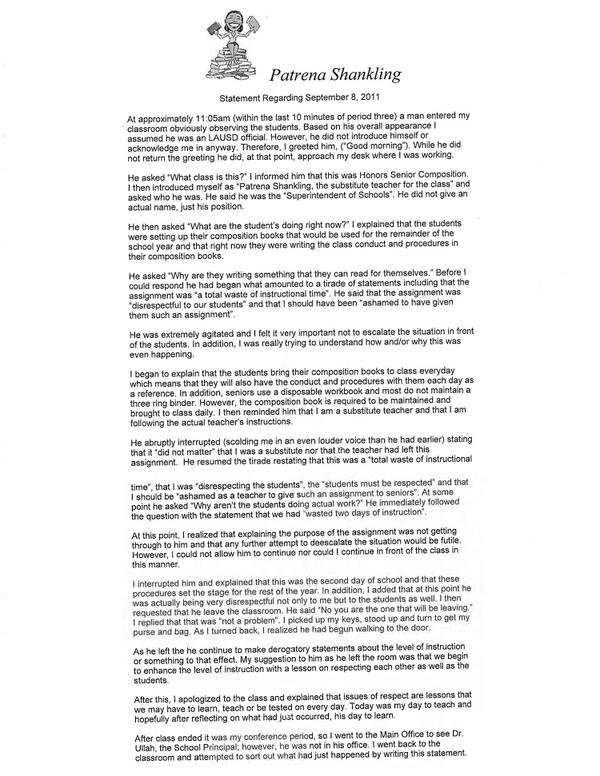 Any day now, I expect to see a crowd of substitute teachers marching around Los Angeles Unified School District headquarters, wearing signs that say "I AM PATRENA SHANKLING" and waving lists of dumb things that substitutes have been asked to do. Shankling is the substitute teacher fired by Supt. John Deasy last fall, after he scolded her for giving 12th-grade students what he considered busywork: copying class procedures from a sheet of paper into their composition books. Since a Times profile on Deasy and my column this week (follows) on the incident, teachers have rallied to Shankling's defense, describing in emails, letters and online comments the hard life of a substitute.

A teachable moment for Deasy, teacher

It was just one morning out of 365, one campus visit out of more than 500 that Los Angeles Unified School District Supt. John Deasy managed in his first year on the job.

But the superintendent's classroom battle with a substitute teacher at Washington Prep High School says as much about the district's struggles and prospects as any schoolyard story or test score stats.

The anecdote was included in The Times' Sunday profile of Deasy, who has garnered mostly good reviews in his relentless — and some say insufferably impatient — efforts to improve L.A.'s public schools.

Deasy has made high expectations the central tenet of that campaign. Too little is expected, he says, of the district's poor and minority students. They can achieve at high levels if we don't settle; if we push and encourage and challenge them.

That's why Deasy blew his top last fall when he encountered students in a 12th-grade English class copying a list of classroom rules into their composition books.

Busywork, he called it. An insult to their potential. A disrespectful waste of time in an Honors Composition course.

He told the students as much, then asked their teacher, Patrena Shankling, what they were supposed to be learning from this.

Shankling was a substitute. It was the second day of the fall semester, and she was following the teacher's lesson plan. She didn't appreciate being scolded by Deasy in front of the students in her class.

They wound up in a shouting match. She ordered Deasy to leave, he threatened to have her removed, she said.

One day later, Shankling, substitute No. 970595, was banned from teaching in L.A. Unified.

The dust-up sounds pretty dramatic. One student called it "an altercation." Another chronicled Deasy's visit as if it were a crime report: "On the date of September 8, 2011, an unknown Caucasian male walked inside the class observing everyone."

The students didn't know who Deasy was when the superintendent walked in with 10 minutes left in third period.

Neither did their teacher. "Based on his overall appearance, I assumed he was an LAUSD official," Shankling wrote in a statement that day. "He did not introduce himself or acknowledge me in any way."

She describes an "agitated" tirade by Deasy. In a writing assignment four days later, given by another instructor, most students took the teacher's side, characterizing the district boss as "nasty … aggressive … rude … mad."

"Super attendant or not," one girl wrote, "he should have shown some respect."

But the "super attendant" wasn't the only one who came out looking bad.

"They both were very unprofessional," another student wrote. "This whole situation could have been settled more civilized and professional then what it was."

I reached Shankling on Monday as she was working in her garden. She's been a part-time sub for 10 years; has a master's degree, runs a tax consulting firm and enjoyed working at Washington Prep, a short walk from her home.

One of the teachers she's subbed for wrote a letter of support that reads like a report card: "Ms. Shankling is … conscientious, committed, competent … punctual, well-groomed … an excellent record-keeper who understands the importance of accuracy."

I get the feeling Deasy is looking for more in teachers than accuracy and good grooming.

Still, I understand why Shankling bristled over Deasy's outburst. "The students write down classroom procedures … so the rules are clear," she told me. "So if someone is not prepared, there are no excuses or arguments."

If Deasy thinks the exercise shortchanges students, "he could have asked me to step outside to talk about it," she said. "The problem was not the assignment. The problem was his behavior.

"He's a bully, to walk in there and disrespect a teacher the way he did. It's so easy for him to talk about what students don't have. A lot of what they don't have is respect."

Deasy's not apologizing for his reaction. His frustration had reached the boiling point:

"We have a shortened school year, and so many [other] issues," he said. "This is not the way we want to use the time for students. Teaching the conventions of writing might have been a better use of their time in class."

At Washington Prep, in South Los Angeles, only 5% of students are proficient in math and 20% in English. And only about 40% of the freshman class makes it to graduation.

After reading student essays on the classroom spat — riddled with misspellings, fragments and run-on sentences — I'd have to agree with Deasy's assessment.

But their deficiencies are not only the fault of that sub, or the absent teacher or even the high school that's about to graduate them.

Consider it a system error: These students made it to 12th grade and landed in an honors composition class without knowing how to spell or punctuate or compose a sentence with subject, verb and predicate.

Did nobody notice along the way? Their parents, their teachers, the counselors and administrators who are supposed to be tracking their progress?

Deasy might find the busywork insulting, but has he ever looked at their homework papers?

Perhaps a conversation with that substitute teacher, without students as spectators, might have taught the "super attendant" something. It certainly would have accomplished more than a classroom tantrum that reduced the issue to an ego clash.

His frustration speaks to the magnitude of the challenge, and the impossibility of finding easy answers.

I give Deasy high marks for his school tours. But maybe next year he ought to skip photo-ops with kindergartners and spend more time on the high school campuses that we like to parcel out to charters.

He would see teachers scrambling to keep unmotivated kids on campus and get unprepared students ready for college. And he might hear from students like this young woman, who shares her lesson from the classroom standoff:

"My opinion is that some people think that just because they have a title mean that they can talk to you like if your lower then what they are well they have it wrong in a few years who knows that someone can take his position and do something better."