Supt. John Deasy seeks teachers' backing on a grant application that could bring $40 million to LAUSD. The union fears the grant won't cover all the costs of implementing the district's proposal. 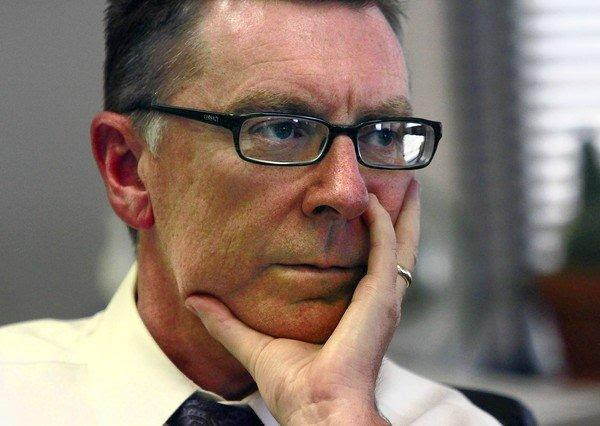 “It would be so devastatingly disappointing to this district if UTLA was not a partner with us” on the application for Race to the Top funds, L.A. Unified Supt. John Deasy said. (Bob Chamberlin / Los Angeles TImes / September 1, 2011)

October 24, 2012, 7:41 p.m.  ::  Faced with a looming deadline, Los Angeles schools chief John Deasy on Wednesday urged the teachers union to lay aside its concerns and back a federal grant application that could bring $40 million to the cash-strapped district.

If the Los Angeles Unified School District wins a federal Race to the Top grant, Deasy said, it could restore hundreds of jobs for teachers, counselors and others to help middle and high school students stay on track for graduation.

"It's a critical opportunity in these painful fiscal times," he said.

But so far United Teachers Los Angeles has not endorsed the application, leaving the district short of meeting the required support from the superintendent, school board president and teachers union. Deasy said all parties must sign off on the application by Friday to make the Oct. 30 deadline.

UTLA President Warren Fletcher said the union was concerned that the grant would not cover all the costs of implementing the district's proposal. The district's draft application proposes a $43.3-million budget, potentially requiring $3.3 million from general coffers that is equivalent to the cost of 39 teachers, he said.

"We need to make sure it's budgetarily sustainable," Fletcher said. "We don't want to mortgage our future."

But Donna Muncey, a district administrator overseeing the grant proposal, said no money from the general fund would be used. The additional money will come from fundraising efforts, she said.

"We are not mortgaging LAUSD's future — receiving this grant will be bringing a more promising future to thousands and thousands of secondary students across the district," she said in an email.

Another sticking point is the requirement from the Obama administration that students' test scores or other measures of academic growth be a "significant factor" in teacher evaluations by 2014. The union vociferously argues that state standardized test scores are an inaccurate measure of teacher performance.

Deasy said that requirement should not be an issue because both the district and union are already under a Los Angeles County Superior Court order to incorporate state test scores in teachers' performance reviews by Dec. 4. Fletcher, however, said the issue of precisely how to do that is still being negotiated.

The union chief said he could not say whether UTLA would support the application until the latest draft proposal was received and reviewed.

The Race to the Top grant program, which was extended from states to individual school districts for the first time this year, will provide $400 million in four-year grants to improve student achievement and teacher effectiveness. Nearly 900 districts are expected to compete for 15 to 25 awards that will range from $5 million to $40 million.

L.A. Unified's 150-page application proposes to focus in the first year on 25,000 students in 35 low-performing middle and high schools. Six of 10 ninth-graders fail to earn enough credits to advance to 10th grade, marking a "critical tipping point" for them, the application says.

Deasy said district officials, administrators and teachers should demonstrate unity to the public in requesting the federal dollars at a time when California voters are being asked to support a tax-hike measure, Proposition 30, on the November ballot. Deasy said the ballot measure would help the district avoid additional budget cuts that could include shortening the school year.

"It would be so devastatingly disappointing to this district if UTLA was not a partner with us," Deasy said.