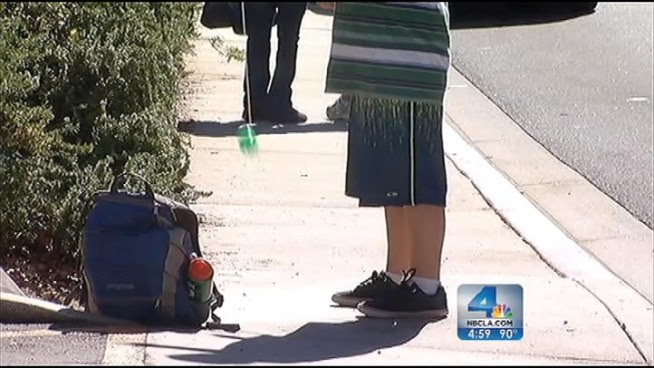 Tuesday, Oct 16, 2012  |  Updated 6:52 AM PDT  “::  More than 90 students were absent on Monday from Medea Creek Middle School in Oak Park after an outbreak of Norovirus, a fast-spreading gastrointestinal virus. More than 300 students have missed school since last week when the virus first appeared in the school. Lolita Lopez reports from Oak Park for the NBC4 News at 5 p.m. on Oct. 15, 2012.

Nearly a third of the students at a middle school in southern California have missed class since last Thursday, as a highly contagious gastrointestinal virus makes its way around the school.

Medea Creek Middle School parent Melinda Pittler carries a bottle of waterless hand sanitizer with her wherever she goes. She and other parents at the suburban Los Angeles school in Oak Park started carrying the germ-killing liquid since the norovirus began spreading through the school last week.

So far, some 320 students have called out sick. On Monday alone, 90 kids were absent.

Ventura County health officials believe some of the 320 sick calls to Medea Creek Middle School were made as a precaution to avoid becoming ill. Some adults at the school have also been sickened by the virus, the origin of which is under investigation. Officials are probing the possibility that it could be related to food contamination.

Norovirus causes stomach, intestines or both to get inflamed and can cause diarrhea, vomiting, nausea and stomach pains, according to the Centers for Disease Control and Prevention (CDC). It spreads quickly through contact with the virus, which can live on surfaces, in contaminated water and food, and in the air.

The virus can lead to dehydration. Young children, older adults and people with other illnesses are most vulnerable to the virus. Most people who contract norovirus get better within one to three days.

Those sickened with the virus are contagious for at least 48 hours after symptoms go away, according to the CDC.

Health officials say hand washing and general cleanliness are the best ways to protect against the virus.

It’s suspected that a single student, who became ill last Tuesday, may have introduced the virus to Medea Creek Middle School simply by being with others in the cafeteria.

So far, the virus has only been reported at Medea Creek but health officials are warning residents – especially families and siblings of Medea Creek students – to clean surfaces at home with disinfectant and wash their hands thoroughly and often.

Student Ofek Schmoof says he washes his hands several times a day at his mother’s advisement. The Schmoof family says they’ll continue that habit, especially with the norovirus making the rounds.

According to a letter sent home to parents, desks, doors and other surfaces at the school are being sanitized daily and hand sanitizers are available in every classroom. A school dance planned for Friday was cancelled so a large group would not gather, potentially spreading the virus.

“There's a bunch of hand sanitizer and when I go to the bathroom there is a lot of soap over there,” Ofek said. “They just want everyone to be clean.”

No hospitalizations have been reported among the students or staff at Medea Creek, and there are no plans to close the school.

Some parents of Los Angeles Unified School District students say their children or their children's classmates have contracted norovirus, though the district had not issued a health warning as of Monday, according to Daryl Strickland with LAUSD.