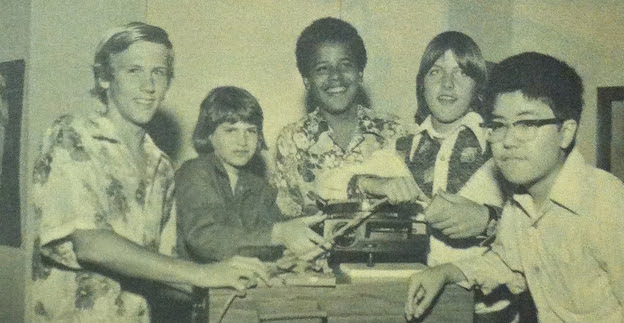 Barack Obama in a 1975 photo from the Punahou School yearbook. He and his eighth-grade homeroom classmates pose with a slide projector as part of the yearbook's theme of "Nostalgia."  Punahau School 1974-1975 Yearbook

October 13, 2012  ::  From now until Nov. 6, President Obama and GOP presidential candidate Mitt Romney will emphasize their differences. But the two men's lives actually coincide in a striking number of ways. In this installment of NPR's "Parallel Lives" series, a look at Obama's time at a Hawaii institution called Punahou. 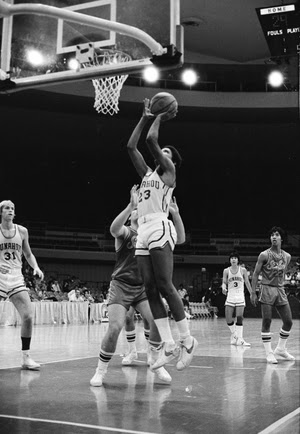 Punahou School was founded by missionaries in 1841 — the campus is just up the hill from Waikiki, and it's built around a historic spring.

Punahou occupies a privileged position, not just on the hillside, but in Hawaii society. In his memoir, Dreams From My Father, Barack Obama recalled how his grandfather pulled strings to get him in.

"[F]or my grandparents, my admission into Punahou Academy heralded the start of something grand, an elevation in the family status that they took great pains to let everyone know," Obama wrote.

For generations, Punahou educated the children of plantation owners, businessmen and politicians. Pal Eldredge graduated from Punahou in the 1960s.

"In the beginning, we were known as the 'haole school,' " says Eldredge.

Haole is Hawaiian for foreigner — or white person. Eldredge says that when young Obama arrived as a fifth-grader in 1971, the school's complexion was just beginning to change.

He was teaching at Punahou at the time, and he remembers the future president as a pudgy, cheerful kid.

"He used to wear these shorts and striped T-shirts a lot, and sandals. But after you got to know him, not only was he a bright student, but he was just a funny, all-around kid, and everybody liked him," says Eldredge.

But in his memoir, Obama dwells on moments at Punahou when his race made him feel conspicuous, such as the time he was teased for playing with the only other black child in his grade.

In the book, Obama's struggles with racial identity grow as he reaches high school, and he recalls intense discussions with another black student, an embittered boy he calls "Ray." Kakugawa says he and young Obama did have some heart-to-hearts about race but, in general, it wasn't a big issue at the school because Punahou kids had to stick together.

"Because we knew once we left that school, there was a target on our backs. No matter what race you are, you're Punahou. You're the rich, white kids. Period," Kakugawa says.

Of course, young Obama was not rich. He was a scholarship student. He worked at a Baskin-Robbins ice cream shop. It's still there, near the school. So is the apartment building where he lived with his grandparents.

In a way, Punahou was his neighborhood — and this being Hawaii, so was the beach.

Sandy Beach Park was one of his favorites. Surfer Turk Cazimero says the scene hasn't changed much since the '70s.

"You come down here on a weekend, you smell every type of weed there is," Cazimero says with a laugh.

Obama has admitted upfront that he did drugs in high school — that's in his memoir. But there are lingering questions about how much he did.

At Punahou, he and his buddies called themselves the "Choom Gang" — choom means smoke pot. And things sometimes got out of hand. One guy rolled a car. But his homeroom teacher, Eric Kusunoki, says he never saw signs of trouble. Young Obama's grades stayed good, as did his attitude.

Another school friend, Ronald Loui, says that when talking about the Choom Gang, you have to keep a sense of proportion.

"There was a group called the Stoners. And the Choom Gang wasn't the Stoners," Loui says.

The Choom Gang were the sons of successful people — one boy's father was a prominent judge — and there was an expectation that they would be successful, too. Loui says if you're looking for Punahou's lasting gift to Obama, this was it: The elite environment familiarized him with success.

"Everywhere he turned, he could see a path to leadership. The highest level of achievement is something he can touch — it's tangible," Loui says.

And it was during that Choom Gang period that young Obama took a class called "Law in Society," taught by attorney and Punahou alumnus Ian Mattoch.

"He was a student who appeared to be serious and yet he was able to socialize with all of his classmates, which isn't an easy thing to do at Punahou School," says Mattoch.

That may be an early glimpse of political skills — but he wasn't into politics yet. No student council meetings for him, perhaps because it would have meant less time for basketball.

"Basketball is his passion. He loved the game," says classmate Alan Lum. He played varsity with Obama. Today he teaches second grade. In high school, Lum says, if you were looking for the kid known as Barry Obama, the first place to check was always Punahou's outdoor courts.

"Just pickup games. That was his realm," Lum says.

Always shooting hoops — it's the one thing everyone remembers about him at Punahou. Another friend says that back then, if he'd had to guess, he would've predicted Obama was destined for a bright career — as a basketball coach. October 14, 2012  ::  From now until November, President Barack Obama and GOP presidential candidate Mitt Romney will emphasize their differences. But the two men's lives actually coincide in a striking number of ways. In this installment of NPR's "Parallel Lives" series, a look at Romney's time at Cranbrook, an all-boys prep school in Michigan.

Cranbrook has been coed since the mid-1980s, its overall diversity is quite evident and the dress code is casual. None of that was true when Mitt Romney, class of 1965, was a student there.

"Very traditional school. It was modeled after an English public school, which of course means a private school," says Mark Hendrickson, one of Romney's classmates.

It's a private school in Bloomfield Hills, Mich., one of the wealthiest communities in the country. Hendrickson, who now teaches at a small college in Western Pennsylvania, was there on scholarship. He lived in the same dormitory as Romney. 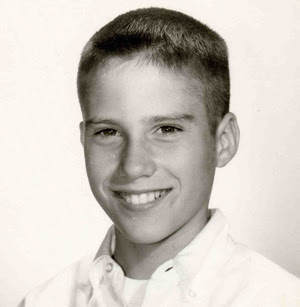 Romney for President/AP - Mitt Romney at age 11 at Cranbrook School in Bloomfield Hills, Mich., in 1958.

"You lived by the bell ... Everybody had to wear coats and ties for breakfast, lunch and dinner, for classes," he says.

After the school day came extra-curricular activities — sports, intramurals — then coats and ties back on for dinner. After dinner, recalls Ted Lowrie, a retired financial services executive, there was evening study.

"By 9:30, study halls were over. You had half an hour to just grab a snack or sit around and talk with other guys," he says. "Then 10 o'clock, [for] the underclassmen, lights were out. And then you did it all over again the next day."

Romney classmate Hendrickson leafs through their yearbook. Both were members of the Blue Key Club, a group that would escort people around the campus. Romney is also pictured with the Glee Club, the cross-country team and in something called the Speculator's Club. He's all over the yearbook.

Romney's future wife, Ann Davies, was a student at Kingswood, the all-girls school located on the grounds.

When Romney first arrived on campus, his father George was the chairman of American Motors Corporation, then one of Detroit's big four auto companies. But having such a prominent dad wasn't unusual at Cranbrook. George Romney became governor during Mitt's sophomore year.

"You never saw Mitt and said, 'That's the governor's son.' He was one of the guys, quite honestly," says former classmate Ted Lowrie.

Romney was known as an active Republican, but Schlecte — who was a friend of his and who describes himself as a strong supporter of President Obama — says Cranbrook was absolutely not a bastion of conservatism.

"Not in the least. It was strictly the classes, whether you were taking Latin or French or German or Spanish, History, English, whatever it may be ... No, the conversation was not political at all," he says.

Romney did have a reputation as a prankster. One particular alleged incident got a lot of attention last May when The Washington Post reported that Romney led a group of boys who forcefully held down a student and cut off his hair. That student was assumed to be gay. Romney said he didn't recall the incident, but he did apologize for any pranks he'd been involved in that "might have gone too far." 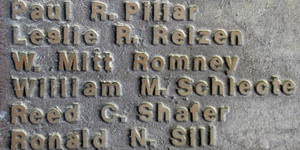 GOP presidential nominee Mitt Romney's name is among those on a plaque honoring Cranbrook School's graduating class of 1965.

Today, Cranbrook officials have no comment on the bullying story, but teacher David Watson brought it up when interviewed by NPR in the hallways of the school recently. He's the faculty adviser to the student newspaper, which ran an editorial in June about the Post story. The students headlined their piece, "It's Not the Media's Cranbrook."

"But they talk about really how the kind of pranks and bullying that were described in the article were a part of the time, not just something that was characteristic of this individual," Watson says, "and they wanted people to know what the school was like now."

The editorial stressed that the culture of prep schools from back then is very different from today.

At Cranbrook, you can still hear an all-boys choir sing the school song, sounding much like choirs from when this was Romney's world. Included in the lyric is the school's motto, "Aim High."

"They equipped us with an education. They gave us the potential to achieve considerable accomplishments, and he did that," Hendrickson says. "He aimed high, he worked hard, he took advantage of the education he was given, he furthered it."

Hendrickson says he will be voting for his former classmate in November.