One Broadie Fails+Falls/Another Slips Right In: BRIZARD OUT IN CHICAGO/BYRD-BENNETT IN

Posted by Duke to the Jersey Jazzman Blog |http://bit.ly/W9DToZ 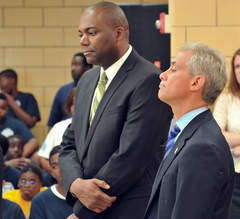 The Chicago teachers strike was a gigantic blow to reformy types everywhere. The CTU and their dynamo of a leader, Karen Lewis, went to war for Chicago's students - not for the teachers, but their students. Understand that all of Chicago's elite lined up to oppose the union's gutsy stance, going so far as to buy off the Illinois legislature under a plan hatched by the smarmy Jonah Edelman.

Brizard was brought in to quell the rising tide of discontent among the plebes. A product of Eli Broad's little Los Angeles training camp, Brizard was a failure in Rochester before he headed off to the Windy City; what chance did he have in Chicago? None, it turns out: