John Greenwood, a moderate, opposed court-ordered mandatory school busing for integration and voted to end it. He was also president of the Southland branch of the Coro organization. 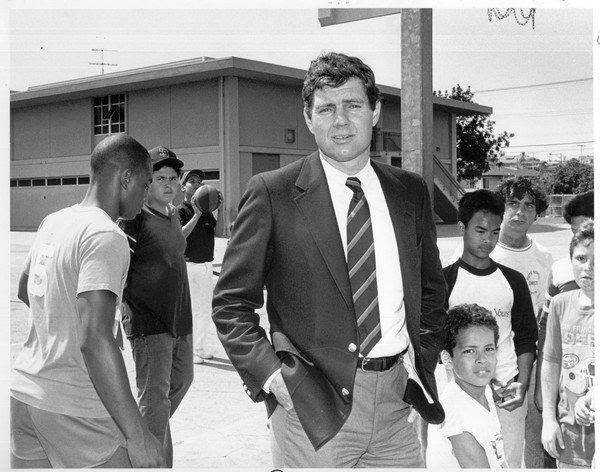 October 19, 2012  ::  John Greenwood, a political moderate who headed the Los Angeles Board of Education in the mid-1980s and later served as president of the Southern California branch of the nonprofit Coro organization, has died. He was 67.

Greenwood died of a heart attack Oct. 11 in San Pedro, where he and his family had lived for many years, said his sister-in-law Peg Greenwood.

First elected to the school board in 1979, Greenwood saw his eight-year tenure begin at a time of deep contention among trustees and in the sprawling district over court-ordered mandatory school busing for integration, which had been launched the previous year.

Greenwood, who represented the Harbor district stretching from South Gate to San Pedro and Wilmington, had campaigned for the board on an anti-busing platform. And in 1981, after court actions cleared the way, he voted with the board's majority to dismantle the compulsory busing program, which affected about 58,000 students in 153 schools.

Greenwood, a Democrat, said at the time that he supported integration but cited the flight of thousands of white students from the district's suburban schools in arguing that the mandatory plan was not working to achieve it. He favored voluntary programs, including magnet schools, to reach the same goals.

"John was a pragmatist and could see that busing hadn't worked," said Roberta Weintraub, an outspoken opponent of mandatory busing whose tenure on the school board overlapped Greenwood's.

"We served at a very contentious time on the board," Weintraub said, "and because of his civility and ability to walk on both sides of the aisle, he was always helpful in trying to find a pleasant way to reach a compromise."

Rita Walters, who at the time of the vote was the only board member to support the mandatory busing program, said that despite their differences on that issue, she and Greenwood respected and liked each other.

"He was not a person who harbored grudges, and I just found him to be a person with whom you could disagree without him ever being disagreeable," she said.

Indeed, the low-key Greenwood stayed largely above the political fray, often urging his colleagues to return to business, even as board meetings at the time occasionally descended into name-calling.

"If the children weren't suffering because we spend so much time arguing over busing, and if the school system could run itself, then this would all be funny," he told a Times reporter in 1980. "But all this fighting is getting in the way of serving the kids."

Greenwood, who ran unsuccessfully for a Los Angeles City Council seat after two years on the school board, was chosen board president in 1983 and reelected to that position a year later. A San Pedro hospital administrator during his board tenure, he often focused on budgetary issues, trying to streamline the district's management and costs.

In 1987, he lost his bid for reelection to the board after the teachers union, angry at his role in stalled contract negotiations, switched its longtime support for him to his opponent, Warren Furutani.

Born in Pittsburgh on Jan. 9, 1945, John Robert Greenwood was the eldest of four children of Blanch, an administrative assistant who later served as a school board member in Glendale, and Robert Greenwood, an electrical engineer.

Greenwood's survivors include his wife, Caren, a former teacher, and their daughter Elizabeth, a deputy Los Angeles city attorney, along with his brother Roger Greenwood and his sisters, Marilyn Ungaro and Kathy Jefferies.