Yes, public pensions got out of hand. But teachers aren't the biggest culprits, nor are they why California has some of the nation's most shamefully underfunded schools.

October 21, 2012  ::  Just as I was preparing to defend public school teachers and their retirement benefits, I got a form letter last week from my employer's vice president for human resources.

Apparently he felt it was important to inform me that I had earned additional shares in the company's stock ownership plan in 2011. Good news? Not really. The value of each share was "$0," and my shares will be "extinguished" upon reorganization and "receive no return."

This means I'm out there with all the other slugs who work in private enterprise, where pensions have all but disappeared and 401(k)s are a roll of the dice. As a group, we're torn between envy and anger, faced with uncertain financial futures while we pay for the comfy retirements of government retirees.

I get an earful from readers who tell me they won't vote for either of the school-funding initiatives on the November ballot because all they see is bloated pensions and legislators acting as wholly owned subsidiaries of teacher unions, intent on resisting reform while protecting burned-out teachers.

And they're not entirely misguided. 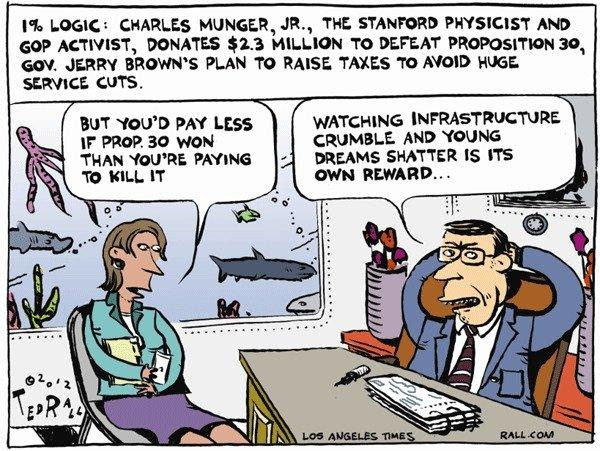 Yes, public employee pensions got out of hand and legislators were all too obliging. And yes, the result was that too many people retired in their 50s with two-thirds or more of their final salary for life, even as public services were eliminated to pay for all those comfy retirements. I've railed against the current public pension system more than once, and it seems to me that Gov. Brown's reform bill was a good start toward later retirement and fewer tricks for padding retirement pay.

But here's the deal:

Teachers aren't the biggest culprits, nor are they the reason we've got some of the most shamefully underfunded schools in the nation.

The average retirement age for California public school teachers is about 62, according to the California State Teachers' Retirement System. They retire with an average of 27 years on the job, at just above $48,000 a year before taxes and other deductions.

That's not peanuts, but it isn't filet mignon, either. And keep in mind that California teachers currently contribute 8% of each paycheck to their own retirement fund. Also, unlike most of the rest of us, they don't get Social Security.

As California's public employee pensions go, the deal for teachers is one of the least generous. So says Marcia Fritz, a pension reform advocate and crusader against outrageous spiking, gaming and other tricks that have made obscenely high retirement pensions possible in California for a minority of shameless belly-scratchers.

Fritz added that while California teachers are among the highest paid in the nation, they also have among the largest class sizes. And there aren't many states with higher real estate prices, either.

That doesn't mean, Fritz said, that the teacher retirement system doesn't need reform. Like many other plans, the system is grossly underfunded, which means a possible gigantic shortfall is waiting just down the road, especially if pension investments tank.

John Marinelli, who retired from the Montebello Unified School District three years ago at age 61, gets more than the average retirement check because he put in 39 years and had master's and law degrees. He said he's not opposed to pension reform if it helps save the system, meaning teachers might have to consider contributing more, waiting until an older age to begin collecting, or switching to a less generous formula to determine retirement pay or healthcare costs.

Like a lot of other teachers, he chose his work because he felt he had something to give, trading what might have been a higher salary in another line of work for a job he loved and the promise of a comfortable, if not lavish, retirement.

Bonnie Cohn, who worked for 20 years as a teacher and 20 more as an administrator in Redondo, said she senses resentment from friends who chose other careers many years ago and now find themselves in trouble financially.

"Teaching didn't pay enough for them, and the work was hard and not very glamorous," she said. "But most of the time I loved my chosen career and took heart in the fact that although I would never get rich, I was building toward a secure retirement."

Public education is far from perfect, with too many instances of administrative sloth, union shenanigans, petty politics and resistance to change. Yes, there are teachers out there who should have been expelled long ago.

But as the parent of a public school student, I've had the privilege of knowing truly great teachers who are able to push aside all the distractions — including moms and dads who are tuned out or leave teachers to make up for their parenting failures — and do their jobs with passion and commitment to what remains a noble cause.

It's hard to believe we've lost more than 30,000 teachers in California in the last few years without a public outcry, and that we may soon add to the sacrifice, stuffing more students into classrooms that are already jammed well beyond the national average. California is in the basement of national rankings for students per teacher, per counselor and per librarian, and despite all that, teacher bashing has become popular sport.

Recent polls suggest Prop. 38 may sink, and Prop. 30 — which would slow the bleeding in K-12 schools and community colleges — is a tossup, despite the fact that the only cost to 98% of Californians would be an extra dime in sales tax on a $40 purchase.

"I will never understand why people vote against their own economic self-interests just to satisfy their warped view of the world," Marinelli wrote to me in reference to 30 and 38. "People who vote against these propositions have no clue how damaging it will be for our future."